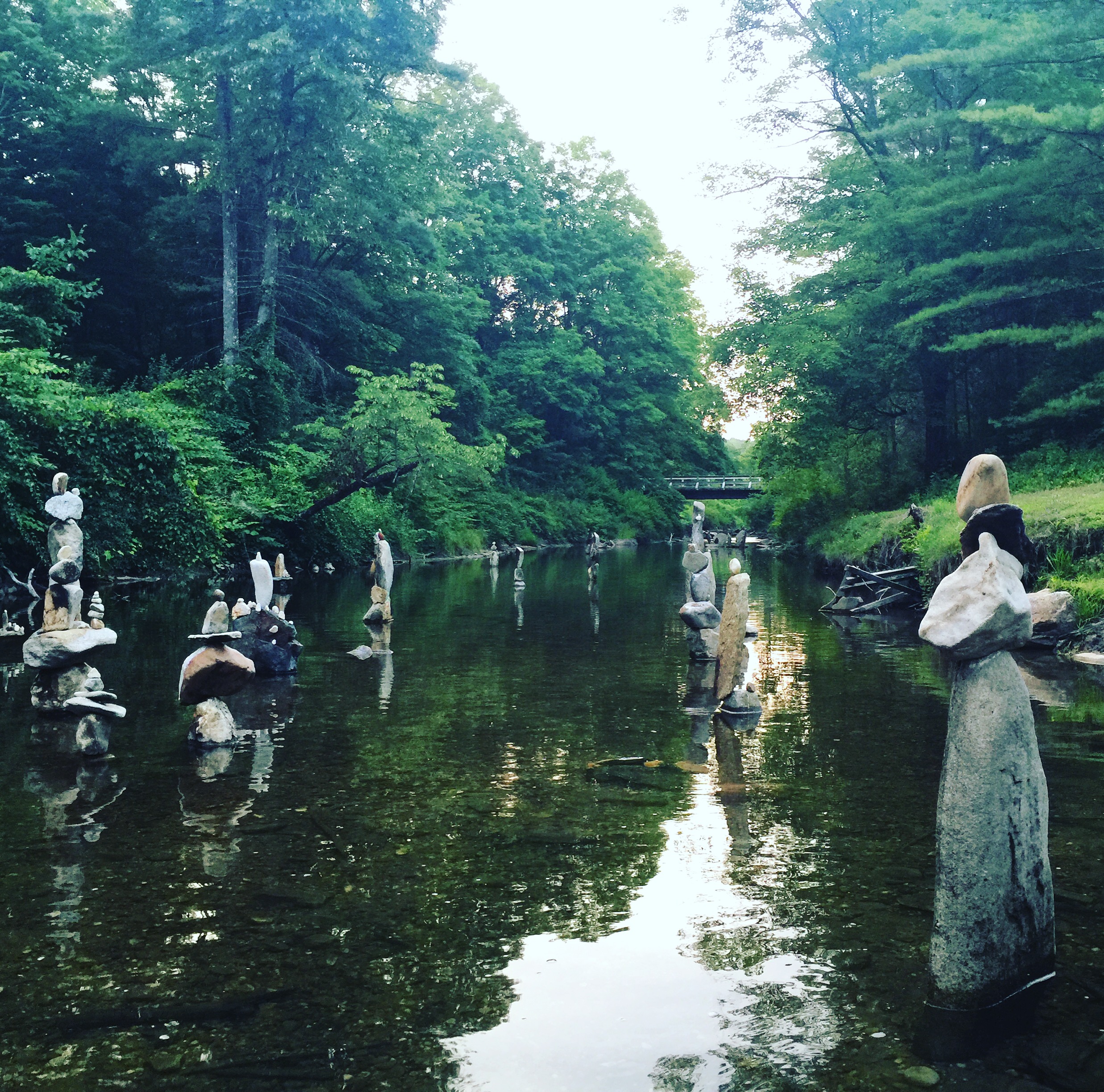 PJ Birriel’s Finding Balance at Umpachene Falls in New Marlborough. Sheffield resident Birriel says balancing the stones helps him find solace in a crazy world. The installation has enchanted those who see it. Photo: Heather Bellow

New Marlborough — A woman stands in the water wearing Georgian-era attire. Another sits on a nearby throne, balancing her swaddled infant, a young child beneath her. It feels like a village, or maybe not, depending on the wanderings of the observer.

Being with them, we forget these are stones, down for ages, now raised into the air with some human help in achieving, perhaps, a desire to express some ancient memory.

And it is the “people” in the water who are really doing the observing, says PJ Birriel, the human who made them, and who, with his black Labrador Retriever, Africa, met me at Umpachene Falls, the setting for his act of solace, self soothing and love.

“I call them the ‘Watchers,’” said this creator of “Finding Balance,” Birriel’s somewhat unintentional installation that is drawing people here from all over the Berkshires and beyond as word spreads of some seemingly impossible balancing acts, and how the figures move, very deeply, everyone who goes to be with them at a quiet landing near the base of the falls.

It was recent news and election coverage that lit this impulse. Birriel, who among other talents is a New York City entertainer with a wicked drag persona, Ashton Cruz, told me while he has always loved balancing rocks, it was his afternoon news habit that sent him running for peace among stones and water. “It was so overwhelming and everything is so hateful and I needed to get away,” he said. “I bring music and the stones help me relax.”

Frisbee in mouth, Africa appears calmed by the stones as well. He moves gingerly around the creations, waiting patiently for Birriel to throw the Frisbee onto the bank, nary a bark or rambunctious episode.

Wearing a dapper cap, red headphones, waterproof pants, and boots, Birriel jokes about his OCD (obsessive compulsive disorder) and how the finding and balancing process is helping him loosen up and accept. He says no matter what form he decides he’ll try to make, the rocks don’t exactly cooperate as they insist on fitting together in a way that allows them to balance.

“I don’t create things I envision,” he told me. “I’m surprised by how they look. The weights and shapes [of the stones] look so different if you turn or twist them–they just click and are solid.”

He has also drawn inspiration, he said, from balancing stones at Rock River, a popular nude swimming hole in Newfane, Vermont, where “people have been doing it for so long they’ve grown thicker and thicker like walls.”

He said he had started to do the stone balancing on the edge of the falls. Some are still there, but he took photos of the larger ones before taking them down when he realized one might topple in an area popular for bathing. “I didn’t want any of them to kill someone,” he said.

Occasionally a child will topple one. Or someone will knock one off the top and try to reassemble it. But Birriel says he thinks that’s part of whole point.

“Even when they fall it’s OK, because new ones come back.”

He says the Watchers have enchanted people so much that he now works by moonlight to maintain some invisibility as the creator and, under last Tuesday’s full moon, he worked until 2 a.m. “When the moon hits them, they light up and look like people walking,” he said. “Now photographers are coming with night cameras.” He is incredulous at the impact of labor he says is “all for love.”

He says this desire to stay invisible as he creates is a steady thread in his biography, beginning with his long career as an entertainer who started out years ago with Disney as the traveling Mickey Mouse goodwill ambassador, and moved on to various drag and burlesque club acts and stand-up comedy routines. Always in costume, he still makes them, too, for various New York shows, and laughed about what a smart “hoarder” he has always been, using, for instance, many pounds of peacock feathers he found for a bargain years ago. His husband, he says, is not always amused.

“I realized what I really liked was being invisible, which is why, when I do this, I do it at night.”

He and his husband, who works most of the week in the city, still keep an apartment in New York. But Puerto Rican-born Birriel moved to this “little cabin on 5 acres” in Sheffield full time, after years of renting here, though he still hosts shows in New York as a “crazy and vile drag queen.” Presently he’s doing a burlesque show at Thick.

He also hosts the local Latin Festival and teaches Zumba at Renaissance Art Center in Great Barrington, where he transforms the studio into a disco, he said. A professionally trained chef, he bakes large gingerbread men cookies decorated with elaborate drag queens, or whatever anyone wants him to make. A recent batch was so popular they were selling for $100 each without any trying on his part. “Can you even believe that?” he asked me.

He says he does everything at his own pace as it inspires him: no pressure. “I just love making stuff,” he said.

But, he says of “Finding Balance,” it’s “impossible to be really creative when expectations get overwhelming, and that’s not what this is about.” He says that has crept in a bit at the falls, as people ask him about his process.

And children, he said, while occasionally bumping into one of the creations, are “protective” when they see other people in water. “They tell them, ‘get away from the rocks.’”

The balanced stones, he said, can stay put for years if left untouched. He has some in his garden that have hung on for 10 years, “even through the winter.”

“I love the idea of the joy I give people,” he said, as a few onlookers stood by the riverbank, smiling and fascinated. “I’m impressed by how everyone who sees them is moved–the young, the old: they’re mesmerized.”

People who have homes near the falls love it, too. Birriel says he’s been asked by one neighbor to create a “permanent” installation in their garden, and others have given him access to their property. “And they always say I’m welcome to come knock on the door if I ever need anything.”

I ask him what it is about stones that have this effect on him, and on all of us. “They carry energy, they’re old,” he says. “I imagine this is just a chunk of something much larger that tumbled, and God only knows where it started.”