Great Barrington — Despite some grumbling over a 7 percent increase for the town’s share of the Berkshire Hills Regional School District’s $25 million capital and operating budget, the town’s taxpayers approved payment of this year’s $14.5 million bill.

But they had to hold a Special Town Meeting on Monday night (June 13) to get it done, since at the May 9 Annual Town meeting, the school budget was killed by taxpayer fatigue over annual increases due to the district’s rising costs, and what many feel is an unfair division of costs among Great Barrington, Stockbridge and West Stockbridge. The meeting was attended by about 250 voters.

“What we really need is a crisis here,” said longtime school budget foe George Beebe. “…what we need is a new formula here.” Great Barrington, he said, was getting “hosed by the other two towns,” and said the problem of rising taxes “will go on…if we pass it again it’s back to business as usual.”

School Committee member Fred Clark urged changes from a “reactive” to a “strategic budgeting approach” to address the ever climbing budget. “We must get on top of this because at this rate it is out of control.” Clark, who voted against the budget at the school committee and at Annual Town Meeting, says his hope that amid a crisis solutions would be found, and that getting a handle on increases will pave the way for Monument Mountain Regional High School to have its badly needed renovation.

That renovation was voted down two years in a row by Great Barrington voters over the annual budget hikes and the 3-town cost division.

Gabrielle Senza, speaking for former Finance Committee Chair Sharon Gregory, said Gregory was at a legislative forum to “communicate these issues,” and that taxpayers and towns should “pressure the Legislature to void outdated laws” that keep state funding mechanisms in place.

And Senza, with a reference to local legislators who say the three towns must work their funding issue out locally, said that was a “cop out,” and that “legislators share some of the blame.”

Chip Elitzer, a RAAC member and a vocal advocate of school funding changes encouraged voting yes on the budget after asking town meeting voters to vote the budget down back in May for leverage with the other towns at RAAC. Elitzer insists that a “unified tax rate” on property value assessments instead of enrollment to determine what each town pays the district would be more equitable.

“The premise of public education is that it’s free,” he said, “and paid for by taxpayers according to their ability to pay, not according to how many kids they have.” The situation here, he said, was that the “kid poor and property rich are favored by the current apportionment method,” and that “the kid rich and property poor are discriminated against.” Elitzer further said the current “formula favors a town where 60 percent of the tax base is second homeowners who do not have children in the school district.”

School Committee and RAAC member Richard Dohoney urged voters to approve the budget, and said town meeting was the “the worst way to solve these problems.” He also urged people to get involved and run for the three vacant seats coming up on the school committee. 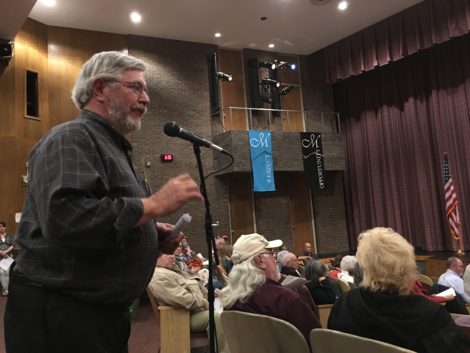 And Superintendent Peter Dillon reminded everyone of how much progress has been made in just the last year. “More happened in the last year than in the last 30,” he said, ticking off money-saving successes like an unprecedented union benefits deal that is saving the district $300,000, more than $1 million in grants, big savings with solar energy, a shared superintendency with the Shaker Mountain district, and a shared services program with other nearby districts.

And it was Richard Coons who reminded everyone why they were here, and how sketchy things could get if the town sunk the budget after its approval by Stockbridge and West Stockbridge, since that makes Great Barrington legally obligated to pony up.

“The issue tonight is how are we gonna raise that [$14.5 million],” Coons said, adding that a no vote would have created a “crisis.” If voters said no, the Selectboard would have had to “come up with that $14.5 million,” and they’d have to find it somewhere, he noted.