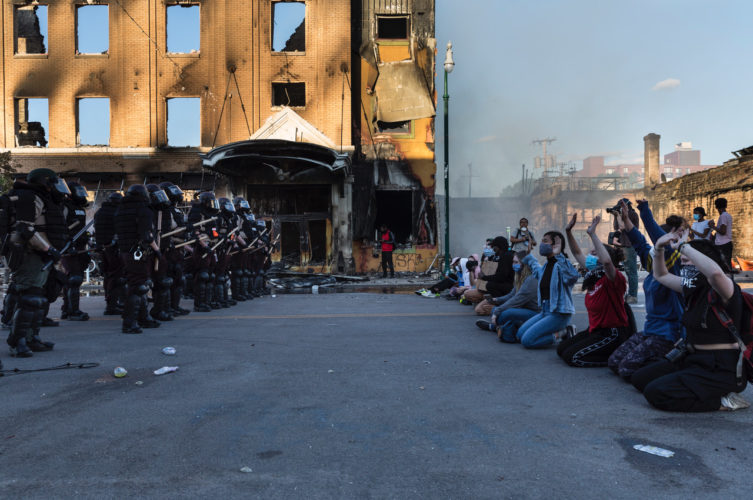 Great Barrington — Fewer than 96 hours after watching a community respond to the senseless death of George Floyd — footage that looped continuously on CNN for several days in late May — Jake Borden found himself on the very ground outside of the now infamous Cup Foods in downtown Minneapolis where Floyd was choked to death by a police officer. “What am I doing here in the Berkshires?” the young photojournalist asked, first of himself and then of his mentor and colleague, photographer John Stanmeyer. More specifically, “Will it be a help or hindrance to go?” he asked Stanmeyer, whose advice was brief. “Go,” he said. And so Borden did — leaving the beautiful, comfortable space in Housatonic where he had spent the previous three months as COVID swept the nation — and chose to descend upon a Midwestern moment Borden saw as a “mass funeral … the community coming together … that the police showed up at.” What transpired over the next five days was captured by Borden through his camera, and 10 of the resulting images now hang in downtown Great Barrington, where “this could have happened … and we wouldn’t stand for [it either].”

“It’s all about leaps of faith,” Borden told me Tuesday morning in the garden outside Avalanche Art Space. “You have to just jump and catch yourself along the way,” he added, paraphrasing advice he received from Stanmeyer early on in his career. “I didn’t really expect my first foray into society [after being in quarantine] to be a riot,” said Borden, who did not travel to Minneapolis with press credentials, rather “a person first with journalistic intentions.” After buying airline tickets the Wednesday following Floyd’s death, Borden had myriad questions: where he would sleep, would he be putting himself or others at risk, and would the riots still be going on topped the epic list. Then he landed and it became “very surreal.” Borden rented a car and headed straight to the Minneapolis 3rd Police Precinct that he watched burn on CNN the night before; when he pulled up, the building was still smoldering.

“It wasn’t really hard to find the action upon arrival,” Borden recounted, adding, “the whole city was in flames.” He spent the entire first night on the streets, joining with protesters who planned to defy the city’s 8 p.m. curfew. What appeared violent at first glance was suddenly humane: Borden found himself standing next to priests and mothers with children; young student volunteers were suddenly juxtaposed against heavily armed military personnel; and girls in sweaters and jeans — sans proper equipment — attempted to pick up glass on the street, remnants of the previous night’s destruction. What Borden saw unfolding was much more than a racially and politically motivated reaction: Through his camera lens, he saw “a memorial to a man who had been lost in the city” taking shape.

“I realized it was something that would be bigger than this one event,” Borden recalled, citing what the media largely called riots as the “culmination of years of multiple social movements — Black Lives Matter, police brutality — [and] trying to get ahead of it.” Borden found a delicate balance: He was able to blend in with protesters and gain their trust while showing he was not a threat to those with clubs. He watched National Guard and state police troops being unloaded from armored vehicles; he witnessed the moments before curfew, these same individuals “pulling back, retreating, creating space, then lobbing tear gas” into the crowd; he captured frame after frame as protesters held their ground, pushed forward, confronted authorities and got arrested; he participated in a parade “for three miles up [Chicago Avenue] to the 5th Precinct”; he listened to the deafening whir of helicopters looming overhead and police sirens screeching on the ground; and he documented residents of Minneapolis, passing by Black-owned storefronts (many of which were marked), choosing instead to loot chain stores and set things on fire.

Borden connected with other photographers whose work he knew from Instagram, and he reached out to a handful of editors who all responded similarly: “We’ll take your work, but can’t take you on [as a freelancer],” calling him a liability. (Borden is currently enrolled in Hostile Environment Training to help change that conversation.) Borden is no stranger to visiting places of societal upheaval. Since 2017, he has been working on a series of personal projects in the United States and internationally, focusing on the long-term effects of conflict. He won first place in the Tbilisi Photo Festival; was a finalist for the 2019 Burn Emerging Photographer Award; and has been published by the BBC, Reuters and Vice News. In fact, Borden traveled to Korea last September and traversed the entire demilitarized zone along the border with Gabriel Edward Adams, known for site-specific installations among which he counts Avalanche Art Space on Elm Street in Great Barrington, which he founded a year ago. Adams, who grew up enjoying “summers of art and culture” in the Berkshires, returned to his hometown of Great Barrington “kind of curious to see what it would be like to bring some crazy force of culture back to the Berkshires.” He is using the small, relatively unknown space in the building where Yellow House Books resides to “test the waters to see if what I do in the world can exist here,” he explained. As to his gallery’s moniker? “What is more powerful than an avalanche?” Adams began rhetorically before leading me to his interpretation. “It’s sudden, all-consuming, inspiring [and] can also be destructive. Culture is [also] a force of nature, and we need as much exposure to that as possible.”

At the moment, Borden’s photography fits the bill. As a photojournalist, he is meant to be a storyteller or, as Borden put it, “a conduit to spread awareness and information.” In short, there are ethics and guidelines that do not apply to a simple artist, which means he is tasked with how to responsibly report on an issue as objectively as possible from as many angles as possible. “Any photograph is a curation of the world,” he explained in a nod to a split-second, subjective decision that comes with each 35mm frame that is captured. The journalistic obligation becomes to tell the whole story objectively, which is influenced by how a photographer comes upon a particular scene, a process that is constantly evolving. “With more experience being able to predict those scenes and get there before they happen [is the goal]” Borden explained, adding, “I am still a person, I have emotions, [and] I am going to react — I am not a robot there with a camera.” Borden captured some “beautiful, apocalyptic scenes” in what felt to him “like a war zone.” Adams pointed to the artist’s ability to “unlock the images” for the viewer through anecdotes and highly descriptive captions, each of which offers the viewer a split-second look into the photographer’s mind, namely: “How far am I willing to go [to get this image]?”

Borden estimated to have taken anywhere from 7,000 to 10,000 images during his five days in Minneapolis; Adams helped him whittle that number down to 10, each of which is for sale as a limited-edition, signed and numbered print. All proceeds from the sale of this show will go toward funding future trips, like Thursday’s flight to Portland, Oregon. “I’m following the action,” Borden said, noting, “especially here, [in the Berkshires], it’s easy to put [one’s] head in the sand and think [these events are happening] elsewhere …” adding, “the way we consume media can be voyeuristic.” So for the moment, Borden is watching how news outlets cover the nation’s unfolding events, and then he is showing up to experience it for himself. “Everyone is on the same corner getting the same angle, and yet we walk away with different perspectives,” he pointed out, having gone from Minneapolis to Washington, D.C., to New York City in the weekends following Memorial Day. “I’m not trying to chase car accidents,” he said, “but this feels like a culmination of human rights issues … and the story is evolving.”

NOTE: Avalanche Art Space presents “Jake Borden: Minneapolis,” an exhibition of images created between May 28 and June 8 that follows the Black Lives Matter movement demanding justice for the killing of George Floyd. The collection includes images from the burning of the Minneapolis 3rd Police Precinct, subsequent clashes with protesters and the solidarity held among individual demonstrators within a national awakening. This is Borden’s first solo show. Open nights this week only: July 23,24 and 25 from 6 to 9 p.m. and any time by appointment. In accordance with social distancing, the gallery has a maximum capacity of two persons; masks are mandatory. The exhibition is also on view remotely via @avalancheartspace on Instagram.