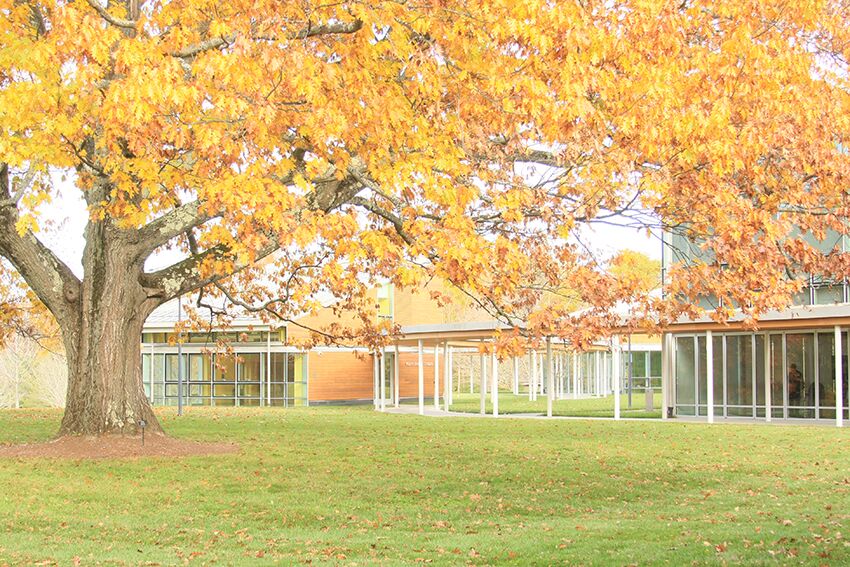 The famous 100-foot-tall red oak tree in front of Studio E at the Linde Center for Music and Learning at Tanglewood in Lenox. Photo: David Noel Edwards

Lenox — For more than eight decades, the Boston Symphony Orchestra’s summer home has reigned supreme as the most idyllic place on Earth to hear outdoor classical music performances. (Ravinia is lovely, too, but it’s no match for Stockbridge Bowl). Recently, however, there has been a shift, and it’s a game changer: Summer at Tanglewood has ceded its title of “most gorgeous outdoor venue” to an inveterate glory hog, the audacious and shamelessly flamboyant Autumn at Tanglewood. In other words, Tanglewood has eclipsed itself aesthetically (and not for the last time). What happened? The advent of year-round programming, made practical in 2019 by completion of the Linde Center for Music and Learning, has established Tanglewood as a must-see destination for foliage fans who prefer a bit of Mozart with their maple leaves. It’s a winning combination that came together Oct. 27, when the BSO’s Zaretsky Trio brought a program of Mozart, Schumann, and Bruch to the Linde Center’s Studio E. Just as the group launched into Mozart’s “Kegelstatt Trio,” the Center’s famous mascot, a 100-foot-tall red oak, began to flutter in the wind, its leaves painted in shades of saffron, peach and tangerine. To be sure, such a spectacle had been half expected, but the audience sat spellbound. It was almost eerie.

Of course, the Tanglewood Learning Institute is just getting started. TLI director Sue Elliott and TLI program manager Emilio Gonzalez are professional educators (in addition to being highly competent musicians) and are full of fresh ideas. So when it comes to future TLI programming, we should expect the unexpected, because most bets are off. But one bet is most certainly on: October in Lenox, Massachusetts, will never be the same. Thus do the Berkshires continue to inspire admiration and envy throughout the world.