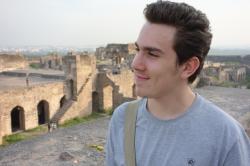 Victor Feldman studies political science at Brandeis University, and is the features editor of the Brandeis student newspaper, The Justice. He lives in Spencertown, New York.

Enrich the soil, cool the planet

Monday, 2 Sep 2019 - Walter Jehne argues that entirely eliminating our reliance on fossil fuels is unfeasible, and that even if we did, it would not reverse the impacts of climate change. Instead, Jehne believes that regenerative agriculture and eco-restoration are the only ways to rebuild our soils, which he argues will dramatically cool the climate as well as reverse many of the symptoms of climate change.

Tuesday, 24 Jul 2018 - Amatul-Wadud is running for Congress to address what she believes are some hard truths about the living conditions in the district that Rep. Neal and others won’t talk about.

NEWS ANALYSIS: In the Berkshires, what a difference a year makes for Senator Warren

Monday, 23 Jul 2018 - Warren adopted a new speaking tactic and abandoned her previous style. Instead she embraced the well-worn path of a campaigner—making a more cynical appeal for quick applause by promising to fight the Republicans and leaving the details of that fight for another day.

Saturday, 21 Jul 2018 - “I was incredibly surprised by the magnitude of their impacts myself,” said Williams College economics professor Stephen Sheppard. “If you live in the county, you think of Kripalu as this funky, interesting yoga thing.”

Wednesday, 18 Jul 2018 - CDCSB executive director Tim Geller told the Edge that his estimate is that construction on the new apartments will begin in the spring of 2021—a year later than currently scheduled—and that the rent will be “very affordable.”

Thursday, 12 Jul 2018 - “His love of rivers and his dedication to environmental justice play a very small part, but can be a lens through which to understand his fuller achievements. There is no better place in the world to tell this part of the story, at the very spot where he was ‘born by a golden river.’ ” -- Rachel Fletcher, founder of River Walk

Saturday, 7 Jul 2018 - Over the past decade, PS21 has built up a reputation in Columbia County and the larger upstate New York area as an ideal place for weekenders and locals alike to escape to on a Saturday night to absorb a bit of culture.

Thursday, 5 Jul 2018 - Nineteen states and over 800 cities and towns have passed 28th Amendment resolutions with cross-partisan support. In Montana and Colorado, voters have approved 28th Amendment ballot initiatives by 75–25 percent.

Wednesday, 27 Jun 2018 - Delgado will be the first Hispanic major party nominee for the district. He’s running on a simple message of fighting for health care and economic opportunities for workers.

Monday, 25 Jun 2018 - The project is just one in a series of efforts by Greenagers to teach teenagers and families sustainable farming practices and how to grow their own food.

Wednesday, 20 Jun 2018 - The separation of the families originally began when, on April 6, the Department of Justice announced the original “zero tolerance” policy requiring officials to prosecute as many immigrants illegally entering the country on the southern border as possible.

Wednesday, 20 Jun 2018 - The Democratic candidates debate lasted nearly three hours and covered issues from Trump's new tariffs, how to protect the EPA and deal with a shortage of farm workers as well as questions on immigration reform, gun control and health care.

Sunday, 10 Jun 2018 - “One of the main objectives of the festival is to include and engage the audience in new and exciting ways – and to include the wider Berkshire community.” --- Sandy Cleary, director of the Daniel Arts Center at Bard College at Simon’s Rock

Monday, 11 Sep 2017 - Often unscripted, Poundstone says that her favorite moments onstage are when she talks to audience members and uses their dialogue in the show.

Saturday, 26 Aug 2017 - Reclaim asks its audience to believe in its cause, but expects blind faith in the assumption that all local governments are deeply corrupt. “They have taken a great tool, the Freedom of Information Law, and weaponized it." -- Michael Kink, executive director of Strong Economy for All Coalition

Monday, 14 Aug 2017 - “How is this happening in America? I feel terrible for the people of Charlottesville. Just because the president hasn’t condemned the actions of the Alt-Right doesn’t mean I won’t.” -- Jeff Turner of Pittsfield

Radical anger in America: How Trump has changed public discourse — and Politicon

Tuesday, 8 Aug 2017 - The line for Ann Coulter trailed almost two city blocks around the convention center and, when she took the stage an hour later, she was greeted with applause worthy of a rock star.

Saturday, 22 Jul 2017 - “Tibetan is no longer an endangered language thanks to some of our efforts. You have to understand the works we are preserving are literature; they are like the dialogues of Plato.” --- Jeff Wallman, executive director of the Buddhist Digital Resource Center in Cambridge

At Pittsfield Town Hall U.S. Sen. Elizabeth Warren tells voters: ‘These fights are for our lives’

Monday, 10 Jul 2017 - “What they have is not healthcare; it’s a tax cut. Three out of four people in nursing homes rely on Medicaid, and what do the Republicans want to do, cut cut cut. They want to gut Medicaid because it’s the only way for them to produce tax cuts for the millionaires and billionaires.” -- U.S. Sen. Elizabeth Warren, at Town Hall meeting, Berkshire Community College

Monday, 3 Jul 2017 - Talbot built up what would become the largest inventory of Pan Asiatic art, and the largest Asian Art Megastore in America.

Friday, 23 Jun 2017 - Sixty Egremont residents, the minimum needed for a quorum, raised their pink slips in the cafeteria of Mount Everett Regional High School to cast their votes in favor of the proposed SBRSD budget, thereby ending the town's dispute with the school district -- for the time being.

Wednesday, 21 Jun 2017 - In the spotlight, State Senate President Pro Tempore Marc Pacheco kept his cool as, one by one, residents stood up to complain about the sound pollution and visual impact of wind turbines.

The Cove may be for sale, but sport of bowling isn’t in its twilight yet

Thursday, 15 Jun 2017 - “Part of me feels how difficult this is … but the other part of me says that this is going to be a great opportunity for somebody.” -- Tom Hankey, co-owner of The Cove Bowling Lanes

Saturday, 10 Jun 2017 - The Planning Board decided that it wanted updated renderings and more information on signage and the potential visual impact of the proposed hangars before they voted to approve the site plan. On Monday, June 12, the airport’s application for a special permit will be voted on by the Selectboard.

Wednesday, 7 Jun 2017 - “Conventional, over-the-counter cold remedies suppress symptoms but don’t treat the root cause. There is nobody out there using vitamin A, D, C, and Zinc in our combination or in our doses.” -- Dr. Alan Inglis

Alert: Where the sidewalk ends… ‘Be Seen, Be Safe!’

Wednesday, 7 Jun 2017 - In addition to safety presentations, there will be a free picnic lunch and safety vests for all participants.

Friday, 2 Jun 2017 - On Friday, June 2, Indivisible Chatham will be hosting a mock town hall on women’s rights in front of Republican Congressman John Faso’s house in Kinderhook. Can a motivated group of dismayed activists grow their grassroots movement into a coalition capable of winning elections? “It’s easier to resist when all the cards are against you, it’s very motivating. Now we just have to win some elections.” -- Indivisible Chatham, N.Y., founder Alan Gelb

Friday, 19 Sep 2014 - Edge correspondents Victor Feldman, the author of this story, and his Great Barrington Waldorf High School colleague Evan Seitz will be at the People’s Climate March Sunday. They will be filing their observations of the event on our Twitter feed, @BerkEdge, that is displayed on our home page as “This Just In.” On Sunday, for the duration of the demonstration, our Twitter feed will be titled “Climate March.” Please follow their accounts.

Thursday, 17 Jul 2014 - “This is also a wonderful chance for our members and the broader community to expand our knowledge of the different ways one can live a relevant Jewish life in the 21st century.” -- Ahavath Sholom Spiritual Leader Barbara Cohen

Sunday, 18 May 2014 - He argues that by exercising his rights as a citizen of the United States – in this case, to vote and be a free citizen even though he has chosen to remain homeless -- he serves as a model to strongly encourage others to exercise their freedom as well.