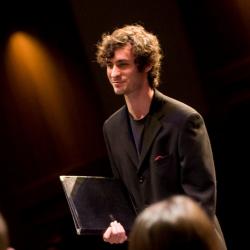 Simon Brown is a composer of music living in the Berkshires. An avid consumer of all things artistic, he can be found at galleries, concert halls and dive bars around the county. Simon is the energetic frontman for the group Polysonic Joy, based in Pittsfield. He is also a composer of music and founder of the Wesfield Festival of New Music, which features U.S. avant-garde music. He lives and teaches guitar and cello in Pittsfield. Simon is a graduate of Westfield State University and Berkshire Community College. He has studied composition with Steve Murray and Andy Bonnacci, guitar with Ed Flower and drawing with Nellie Fink.

Tuesday, 14 Jul 2015 - For anyone following the local music scene, Sounds and Tones is run in part by Christopher Hantmann, who is a major presence in North Adams’ Common Folk Artist Collective, the group that has been facilitating live music and art displays.

Friday, 12 Jun 2015 - Great Barrington — On Saturday, June 13,  the little white church in Housatonic known as the Guthrie Center will celebrate a union activist killed by a U.S. firing squad 100 years ago in Utah. Joe Hill, the Swedish-born songwriter of “Casey Jones,” among other labor songs, will be remembered by the “Joe Hill 100 Roadshow,” […]

The Music Scene: Nick Zammuto on North Adams, Gotye, polyrhythms, and The Books

Friday, 3 Apr 2015 - An interview with indietronics musician Nick Zammuto, with some very cool videos of his music. "I came out here to go to school [at Williams College], and then when I was a senior I moved to North Adams into an apartment over on Miner Street, which was fantastic. It was super cheap, and there were no distractions, so I got a lot of music done."

Monday, 8 Dec 2014 - The Pitts House Concert Series pledges to marry music and amenities this winter, and the first concert delivered.

Saturday, 6 Dec 2014 - "My goal in booking music is to be consistent in hiring local bands. Of course I will have bands from out of town coming in for events, but I don't ever want to stop being a destination to enjoy hearing the starving artists in our community." -- Tyler Stanton, of the Fallen Starlets, in charge of booking at Gedney Underground

A Rock Show at an art gallery: The Whitney Center

Saturday, 22 Nov 2014 - Check out the band Polysonic Joy's new video, and read Simon Brown's view of the music scene in Pittsfield where there is "somewhat of a revival in local music, with the Pitts House Concert Series spearheading the movement (more on that series soon). I'm excited because I think the stars are starting to align."

Band profile: Quiet in the Head

Sunday, 16 Nov 2014 - Music is rarely described as “brave,” but Quiet in the Head is that. They’re one of those rare trios that doesn’t care about what you think; they defy categorization. The best a baffled listener can do is mutter something about “neoclassical unplugged fusion” – accurate, some of the time. Smooth, melodic violin and cello playing […]

Traveling with the music underground

Sunday, 21 Sep 2014 - They squawked, banged and clanged their way through several Seussian numbers before the bar crowd was forced to stop blathering and pay attention.