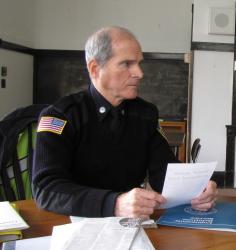 Larceny and treason in the early Republic

Thursday, 26 Mar 2020 - Not long after that encounter with Burr, letters from Barnabas to Mary began to include details of the suspected attempt by Burr to cede the Louisiana Purchase and create a country over which he could rule.

Saturday, 7 Apr 2018 - The [Civil War] soldier’s monument was built in 1867. Williamstown was the first to build one in Massachusetts, Stockbridge the second.

Sunday, 25 Mar 2018 - In the middle of the intersection, on what started out as a quiet Sunday morning 241 years ago, there was a call to arms.

Sunday, 14 Jan 2018 - In 1795, had President Trump uttered what he is said to have said about immigrants from Haiti and Africa, he would have been fined. At the time, of course, his relatives were in Russia.

Stockbridge Mohican wisdom on a life well-lived: A conversation with Mohican delegation in London, 1766

Monday, 8 Jan 2018 - ‘Your state of society is an endless source of wretchedness… in a state of society like yours those who labour most enjoy the least, and thou who labour not at all have the greatest number of enjoyments.’ -- Stockbridge Mohican Sachems Daniel Nimham, Jacob Cheeksaunkun, Solomon Uhhaunauwaunmut, John Naunauphtaunk, as recorded by John Trusler during their visit to England

LOOKING BACK: Is Stockbridge at an intersection?

Wednesday, 1 Nov 2017 - It is not without some irony that the town of Stockbridge, which harbors such an incredible history, has failed on so many occasions to preserve the symbols of that history.

Tuesday, 19 Jan 2016 - The brick Dutch Colonial Revival building currently housing Yankee Candle and The Image Gallery provided offices for the Board of Selectmen, TownClerk, assessors and the Police Department for almost 80 years.

Sunday, 6 Dec 2015 - Basketball, invented in December of 1891, quickly grew in popularity and Stockbridge was not immune. In 1910, voters authorized the raising of the main floor of Town Hall 12 to 15 inches to create a basketball court for the William High School team. It cost $500.

Sunday, 22 Nov 2015 - The Town House was built by subscription, rather than tax levy, in part because of the town’s poor financial condition.