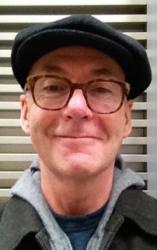 Robert Ayers has been a truck driver, factory worker, speechwriter and university professor in England, a performance artist in Australia, France and Scotland, an artist’s apprentice in New York City, a novelist and art critic in Seattle, and a journalist in Philadelphia, Toronto and San Francisco. He now lives in our part of the world where he just draws his dogs.

Tuesday, 13 Sep 2016 - Lulu and Hershey have an apology to make for abruptly ending their latest narrative: They're moving to Brooklyn, and will return once they settle in.

Monday, 12 Sep 2016 - "A Change of Place" is nothing less than a major cultural event. We are genuinely fortunate that it is happening in our part of the world.

Thursday, 8 Sep 2016 - Lulu and Hershey begin to explain the elephant mosaic they were given during their vacation last week.

Wednesday, 7 Sep 2016 - Lulu and Hershey, those intrepid Dogs News Network correspondents, are back from vacation in England. And they've brought something back.

ART REVIEW: Splendor, Myth, and Vision: Nudes from the Prado

Friday, 26 Aug 2016 - Because it is right here in Berkshire County, perhaps it is easy to forget what a major art museum the Clark is, and how highly it is regarded internationally.

Tuesday, 23 Aug 2016 - After their furious coverage of the Democrat and Republican conventions, Dogs News Network (DNN) correspondents Lulu and Hershey are taking a well-deserved vacation.

Thursday, 18 Aug 2016 - In the latest Lulu 'n' Hershey, Doktor Herschlich and Lulu are confounded by the attitude of their new patient, Donny.

Thursday, 11 Aug 2016 - The latest dispatch from Lulu and Hershey about Donald Trump on the presidential campaign trail.

Tuesday, 9 Aug 2016 - Lulu and Hershey return to covering the presidential campaign for Dogs News Network (DNN). They find a demoralized -- some would say -- panicked Donald Trump coterie, as these three panels relate.

Sunday, 7 Aug 2016 - For the past week, Hershey has been revisiting his past as a rock star (see panels below)… but now it’s back to business in the coming week… as he and Lulu, correspondents for DNN (Dogs News Network) revisit the volatile American political scene.

Tuesday, 2 Aug 2016 - If you’ve ever thought that “the contemporary art world is in many respects a criminal enterprise,” then you shouldn’t miss this talk on August 6, for this is exactly the sort of idea that Richard Vine will be exploring.

Wednesday, 27 Jul 2016 - The alien robot, Don-L, deploys his ultimate weapon in the campaign to win the U.S. presidency and conquer Earth.

Tuesday, 26 Jul 2016 - The Don-L robot from the Planet Komovur, having secured the Republican nomination, boasts about his military connections.

Monday, 25 Jul 2016 - With a message from the alien overlord from the Planet Komovur, Dogs' News Network (DNN) correspondents Lulu and Hershey continue their coverage of the presidential primary season, as the Democratic National Convention gets under way in Philadelphia.

Tuesday, 19 Jul 2016 - As reporters for DNN (Dogs' News Network) Lulu and Hershey are working the Republican Convention in Cleveland where there's a sinister back story to the presumptive nominee.

Friday, 15 Jul 2016 - At Dogs' News Network (DNN), anchors Lulu and Hershey are stunned and horrified by the terror attack in Nice, France.

Wednesday, 13 Jul 2016 - The rulers of planet Komovur are delighted with the success of their robot Don-L in inflaming violence on Planet Earth.

Tuesday, 12 Jul 2016 - At Lulu and Hershey's coffeeshop, the Cafe Perspectivo, there is frustration and puzzlement over how to respond to the shootings in Louisiana and Minnesota.

Monday, 11 Jul 2016 - Patrons and staff at Lulu and Hershey's coffeehouse, the Cafe Perspectivo, react to the shootings across in Dallas, Baton Rouge, Minnesota, Chicago.

Sunday, 10 Jul 2016 - The alien scientists on Planet Komovur have encountered a bit of a glitch with the robot Don-L which is to help them conquer Earth.

Thursday, 7 Jul 2016 - Now the alien plot uncovered by Dogs' News Network reporters Lulu and Hershey is revealed. The aliens on planet Komovur have created a robot to invade earth. It's name is Don-L.

Wednesday, 6 Jul 2016 - As reporters for the Dogs' News Network (DNN), Lulu and Hershey have uncovered a diabolical plot for world domination.

Tuesday, 5 Jul 2016 - Dogs' News Network correspondents Lulu and Hershey report on strange happenings on another planet that could have an influence on presidential election politics on Earth.

Saturday, 2 Jul 2016 - Editor’s Note: Outraged by the BRexit vote and inspired by the lunacy of the looming presidential election — with the spectacle of the Republican convention soon upon us —  Lulu ‘n’ Hershey, those fearless anchors of Dogs News Network (DNN) and the creation of cartoonist and visual arts commentator Robert Ayers, are making a return engagement […]