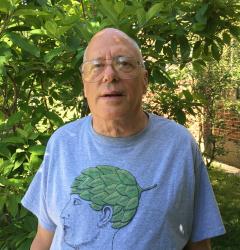 For 38 years Nick Diller was the morning host of WSBS Radio in Great Barrington, and then a cameraman for CTSB Television. When not behind the microphone or camera, Nick pursues his true passions: Weather watching, using weather records of Great Barrington dating back to 1965. He’s been brewing beer since 1994. He’s a master at barbecuing and grilling and often teaches others how to grill. And he makes various types of barbecue sauces under his Griller Diller label. (He grows his own hops for brewing) and being the nanny (Manny) of his granddaughter.

Wednesday, 1 Jan 2020 - This December was the 5th rainiest and 8th snowiest, making December the third straight month with above average precipitation.

Tuesday, 1 Oct 2019 - As far as temperatures went, this September was slightly above average.

Sunday, 1 Sep 2019 - August was the third straight with much below average rainfall. The rivers and streams are showing it.

Tuesday, 2 Jul 2019 - June’s average temperature ended up 1 degree below average and that made it the seventh coolest.

Monday, 3 Jun 2019 - Believe it or not, this year’s May rainfall was a quarter of an inch below average, despite 19 days of measurable rain.

Thursday, 23 May 2019 - I have recorded only three completely (midnight to midnight) fair days this month.

Thursday, 2 May 2019 - The month turned out to be the eighth warmest and eighth wettest since the beginning of my weather keeping in 1965.

Monday, 1 Apr 2019 - The 10 inches of snow brings our running total to 54 inches for the season. The average is about 65; we probably will not make last year’s total of 95 inches, which included 42 inches for March.

Friday, 1 Mar 2019 - This year, there were only 9 inches of snow, which melted to less than 1 inch of water—that made this February the 17th driest.

Friday, 1 Feb 2019 - We average five below-zero days in January and generally about seven a year, though in the winter of 2001–02, I recorded none at my station.

Wednesday, 2 Jan 2019 - That humidity translated into a very wet year with the most precipitation seen in this young century of 63.72 inches, which was nearly 20 inches more than last year and 24 inches more that the drought year of 2016.

Wednesday, 19 Dec 2018 - In cold weather you will need more fuel to maintain proper temperature, so make sure you have a full bag of charcoal and, if you’re cooking your rib roast on a gas grill, at least three-quarters of a tank of propane.

Saturday, 1 Dec 2018 - November temperatures were the second coldest this century.

Thursday, 1 Nov 2018 - The warm, humid and wet weather did a job on the foliage, not only in the Berkshires, but also in many other locations in the Northeast.

Monday, 1 Oct 2018 - An article in the Washington Post sited high Atlantic Ocean temperatures in the 70s and 80s as the reason for the extreme humid conditions this summer.

Wednesday, 1 Aug 2018 - Weather people tell us August will start out the way July ended: warm and humid. My gardens love it!

Friday, 1 Jun 2018 - The month finished as the fourth warmest and ninth driest in the now 53 years of weather recordkeeping.

Sunday, 13 May 2018 - I knew temperatures would only be in the 50s for most of the day so that would necessitate more time needed to cook this bad boy to an internal temperature of 200F.

Tuesday, 1 May 2018 - Precipitation reflected the cool temperatures with twice the amount of snow.

Monday, 2 Apr 2018 - The temperatures for March were colder than average with a mean of 33 degrees, which turned out to be the 11th coldest in the 53 years of record-keeping with a temperature of 33 degrees compared to 34.5 degrees.

Thursday, 1 Mar 2018 - Twenty-two of the 28 days came in above average, producing seven days of 50 or above temps and three of those hit 60, including two record highs.

Thursday, 15 Feb 2018 - I brought the chicken into the kitchen to add to fresh beets and baked sweet potatoes as well as a delicious salad.

Thursday, 1 Feb 2018 - January snowfall was just about average at 17 inches. But we received well above rainfall.

Thursday, 14 Dec 2017 - It's interesting to note that the daily high temps in November 2017 were warmer than average while the lows were colder.