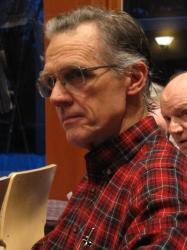 A resident of Great Barrington, Michael Wise served as co-chair of the Master Plan Committee and is vice chairman of the town Finance Committee.

Thursday, 21 May 2015 - If we could cut the tax bills for 80 percent of the homeowners living in Great Barrington, and cut them by 20 percent for most of Housatonic village, yet we decide not to do it, then we should be able to give those people a good explanation of the costs that compelled that decision.

Tuesday, 31 Mar 2015 - Eighty percent of Great Barrington home owners would see their property taxes decrease. For the median home, valued at $294,400, the residential exemption would cut the tax bill 11 percent. Benefits would be concentrated in Housatonic village and Risingdale, where most tax bills would drop at least 20 percent.

Friday, 17 Oct 2014 - Most of the costs of the renovation plan are actually repair and code-upgrade costs. No realistic scenario can avoid paying the principal costs of sustaining that building, sooner or later. in the meantime that building is going to need work, probably starting with that expensive roof. Postponing decisions about facilities ... means educating a generation of students in a decaying building.

Toward a more affordable Great Barrington

Friday, 2 May 2014 - To address our tax burden directly and make living in Great Barrington more affordable, the town could adopt the “residential exemption,” which would reduce the tax bill substantially for those who most need relief.