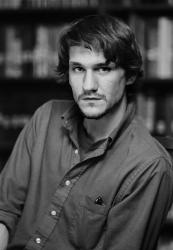 Matthew Vernon Whalan is a writer living in Southern Vermont. He has written political commentary and other nonfiction for OpEd News, CounterPunch Magazine, The New York Journal of Books, eoinhigginswriting.com, The Brattleboro Reformer, The Berkshire Record, The Berkshire Edge, and other magazines and newspapers. He has also published fiction and poetry in Foliate Oak, Hitherto MUIC, Thunderdome, Aberration Labyrinth, Literary Orphans, and other literary journals.

Open letter to American youth: Calm down, freak out

Monday, 14 Nov 2016 - In his letter to the editor, Matt Whalan writes: “If you are afraid, calm down. You are not trapped. We are not stuck with Trump. Trump is stuck with us.”

Lessons from the Democratic convention

Sunday, 20 Dec 2015 - He sent me letters from Iraq. He told me stories that seemed he needed to get down on the page or else he would explode.

A reflection upon the Charleston, South Carolina shootings

Monday, 9 Mar 2015 - “Well, I prolly don't have much time left. That's why I wrote it to her. So I prolly wouldn't be able ta stop waitin on her ta write back before I had the chance ta do anything, before the old bucket kicked me. Guess everybody dies waitin for somethin they ain't gonna get though.”

Sunday, 14 Dec 2014 - For the most part he enjoyed the secrecy, as though he were absurdly undermining the conventions insisting upon his loneliness — his lostness, his girlfriend, his future in the world, his security, the shame upon his habit.

Part II: The heroin epidemic in our town, and our culture of cruelty

Sunday, 3 Aug 2014 - I hate heroin. I hate that it disappeared some of my childhood friends, killed others, and left still others straggling down our Main Streets with those shadows in their cheekbones.

I think my Blue Neighbor is screaming

Sunday, 27 Jul 2014 - A poem by Matt Whalan, with an illustration by Alison Lee, about a particular terror in Housatonic.

Part I: The heroin epidemic in my town

Wednesday, 23 Jul 2014 - We cannot dismiss the problem of heroin and the underlying, mysterious madness of the youth here. What do people need to escape from when they need to escape this much, this far?

Monday, 14 Jul 2014 - It is far easier to have a teaching disability than a learning disability. Kids who are both intelligent and a bit rebellious are usually the kids who end up struggling in school.

A poem: In My Town

Tuesday, 17 Jun 2014 - In my town the youth congregate to complain about their futures and Try their hand at drinking away their worries. They want more than their imaginings of the future can give them