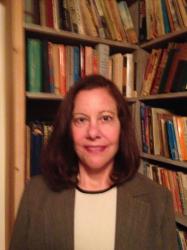 Mary Stewart Douglas is an environmental lawyer who has worked at the Environmental Protection Agency, private firms, and, most recently, with an association representing the state and local administrators of the Clean Air Act. Before law school, she worked as an editor for John Wiley & Sons. Although she has lived in Washington, D.C. for 30 years, Mary can frequently be found in Massachusetts – Boston, Amherst, Great Barrington, and Northampton – visiting friends, relatives, and her three children. Mary holds degrees from Smith College and Hastings College of the Law.

Sunday, 16 Jun 2019 - "At EPA there’s a big morale issue at the staff level. It’s awful. Some employees wouldn’t normally think of leaving, but after two years of this, they wonder what they should do. I was counseling people in their 30s to hunker down for the longer run. But how can the EPA people work for a President who lies every day?” -- Jim Murphy, former Community Involvement Coordinator for Environmental Protection Agency Region 1 that comprises New England

Monday, 22 Oct 2018 - For now, at any rate, no interstate pipeline is on the horizon, nor are any other projects such as federal highways or railroads that might threaten Article 97.

Thursday, 9 Aug 2018 - “I definitely share in the disappointment about the lack of net metering increases. I understand there are a lot of folks in the Berkshires and in my district who are vocal proponents of lifting and even eliminating the cap on metering credits." -- State Rep. William "Smitty" Pignatelli

Hostile Takeover at the EPA

Monday, 18 Jun 2018 - Anti-democratic governments, which thrive on obfuscating truth, seek to delegitimize and suppress scientists and other authoritative voices that offer accurate information that can be used to hold the government to account… So people who live near facilities that emit carcinogens or other hazardous pollutants are likely to be breathing more of them than before.

EPA initiates second round of mediation on Housatonic River cleanup

Monday, 14 May 2018 - Berkshire County residents have been vehemently and consistently opposed to dumping PCB waste in any of the three locations that GE has proposed – Woods Pond, Rising Pond, and Lenox Dale. EPA’s final permit required GE to transport all PCB waste off-site to a licensed PCB disposal facility.

PCB landfills can be avoided if EPA cleanup plan for Housatonic River is revised, appeals board rules

Sunday, 4 Feb 2018 - If the Region were to roll up its sleeves, as it were, and revise the remanded permit, the Housatonic could yet remain free from the risks and burdens of PCB landfills.

Saturday, 18 Nov 2017 - Tennessee Gas Pipeline Co. was left with highly contaminated water that the company had not expected – and a big disposal problem.

Thursday, 9 Nov 2017 - New England ratepayers paid $3.6 billion more for electricity due to capacity withholding. The utilities appear to have had an additional motive for withholding gas. Not only did the practice raise rivals’ costs in the electric generation market, but the artificially created gas shortages and high energy prices also lent credibility to the arguments for natural gas pipelines.

In spite of Trump, states and cities rally in support of Paris Climate Accord

Sunday, 9 Jul 2017 - The hazy nature of the notice coupled with the confidentiality agreement may evidence Kinder Morgan’s wish to delay, as long as possible, the public outcry that previously helped sink the NED project.

Sunday, 11 Jun 2017 - Front and center in the arguments was GE’s insistence on site disposal at Woods Pond on the Lee-Lenox border, Rising Pond in Great Barrington, and near Forest Street in Lee.

Saturday, 6 May 2017 - So where were the Massachusetts officials who could have negotiated with Connecticut to save Otis State Forest because the gas wasn’t really needed after all?

Tuesday, 25 Apr 2017 - Congressman Richard Neal has demanded that decisions made by FERC regarding the Connecticut Expansion Project be deferred until a quorum of FERC commissioners is reached and all vacant FERC commissioner seats are filled: “It is my belief that the rehearing [on the permit] should occur before a single tree is cleared and construction on this project commences.”

Monday, 24 Apr 2017 - Although EPA’s final remedy requires the General Electric Company to transport and dispose of PCB waste in a federally approved landfill, the company is fighting tooth and nail to dispose of contaminated waste locally.

FERC deals a blow to pipeline opponents, but some options remain

Wednesday, 19 Apr 2017 - Is there a significant need for natural gas in Connecticut to cause Tennessee to proceed [with the pipeline] despite the fervent opposition? The answer appears to be “not anymore.”

Sunday, 2 Apr 2017 - On March 15, the Court held that the Natural Gas Act does not allow pipeline companies to leapfrog over state administrative procedures in order to expedite their projects. This is the first time a federal Circuit Court has interpreted the relevant language in the Natural Gas Act.

The people vs. FERC: Where is the oversight of gas pipeline risks?

Tuesday, 20 Dec 2016 - “Trump doesn’t like to lose. If he doesn’t make renewables a priority, he will lose to the countries that are working to be clean energy leaders.” -- Maya van Rossum, head of Delaware Riverkeeper Network

Tuesday, 27 Sep 2016 - In their legal filing to the Massachusetts Department of Environmental Protection the complaint of the Citizens alleges that “the proposed pipeline would permanently degrade and impair water uses and quality for waters located at the heart of [8,500 acres] of interconnected, valuable open space.”

Thursday, 18 Aug 2016 - “The Court’s decision makes clear that if pipeline developers want to build new projects in this state, they will need to find a source of financing other than electric ratepayers’ wallets.” -- Attorney General Maura Healey

ANALYSIS: Could Otis State Forest be saved on appeal of court pipeline ruling?

Monday, 16 May 2016 - The Berkshire Court’s order granting the easement and injunction was arguably premature and, in legal parlance, unripe. An appellate court could overturn the injunction on this basis alone.

NED gas pipeline killed by lack of demand and customers, and intense opposition

Saturday, 23 Apr 2016 - If Kinder Morgan had taken a close look at the Commonwealth before launching NED, the company would have seen that Massachusetts has cut energy demand so dramatically that it has little need for more natural gas.

Saturday, 23 Apr 2016 - When a settlement is reached, New England ratepayers are expected to get rebates for the unfair transmission rates paid.

FERC to Kinder Morgan: ‘Sandisfield pipeline? Not so fast.’

Saturday, 26 Mar 2016 - The Federal Energy Regulatory Commission is now requiring, among other things, clarification “that Tennessee would not fell trees in areas where it has not obtained an easement or purchase of property…including lands protected under Article 97 of the Massachusetts State Constitution.” “This is very exciting news. While very few people see the need for this gas line, all that we have ever asked of Kinder Morgan and FERC is to follow the process, be open and be fair to this beautiful community of 800 residents." -- State Rep. William "Smitty" Pignatelli

Sunday, 20 Mar 2016 - "The purchase of this spectacular property [Otis State Forest] ensures its lasting protection and is an example of our prudent investment in the Commonwealth’s rare and irreplaceable natural resources.” --- Gov. Deval Patrick, in 2007 “We’ve been FERC’ed!” -- Rep. William “Smitty” Pignatelli, upon learning that the Federal Energy Regulatory Commission had approved a Tennessee Gas Pipeline route through the protected lands of Otis State Forest in March of 2016

GE welcomed in Boston; will PCB dumps bloom in the Berkshires?

Friday, 19 Feb 2016 - Massachusetts could have conditioned the move to Boston on an expeditious, cooperative cleanup of the Housatonic River; there is no evidence that that happened. On the contrary, GE appears to have received benefits and incentives in the East, and no reminder of its responsibilities in the West.

Sunday, 10 Jan 2016 - The Federal Energy Regulatory Commission (FERC) has extended the deadline for commenting and for intervening as a party to the proceedings to January 15 at 5 p.m. Intervener status allows full participation in hearings on Northeast Direct (NED), including cross-examination and the submission of briefs.

Thursday, 29 Oct 2015 - A public hearing in Boston on Tuesday, November 10, before the Joint Committee on State Administration & Regulatory Oversight, will consider a bill to remove conservation restrictions from Berkshire and Hamden counties' state forests and protected lands. State Rep. Smitty Pignatelli and state Sen. Ben Downing urge Berkshire residents to attend this hearing to oppose this measure. The Sandisfield Taxpayers Opposing the Pipeline have chartered a bus to go to the hearing.

Sunday, 18 Oct 2015 - “We have before us a [cleanup] that allows significant concentrations and volumes of PCB-contaminated sediment, soils and water to remain in the water after completion of remediation activities…” -- Rest of the River Municipal Committee, composed of Lenox, Lee, Stockbridge, Great Barrington, and Sheffield

Saturday, 19 Sep 2015 - The export of liquid natural gas (LNG) now expected to be a major component of the Northeast Direct natural gas pipeline project is likely to result in higher domestic prices. “The very facts surrounding the need for additional gas capacity are highly disputed.” -- Massachusetts Attorney General Maura Healey, who is also challenging the legality of the ratepayer-funded pipeline