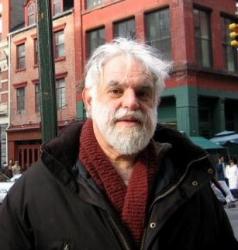 LEONARD QUART: Living with the plague

Wednesday, 25 Mar 2020 - For the moment, I am thinking of how the country will deal with the agony of the present.

LEONARD QUART: ‘Sorry We Missed You’ is Ken Loach’s version of the gig economy

LEONARD QUART: A few takes on the state of America and New York City

Tuesday, 11 Feb 2020 - I know it’s self-evident, but what strikes me is how differently we treat idols of the popular culture, and famous writers who die.

LEONARD QUART: On politics and films

Tuesday, 21 Jan 2020 - I’m struck by how different the very personal and deeply felt Akerman film is from the Golden Globe-winning and Academy Award-nominated “Joker.”

Dark times are upon us

Thursday, 2 Jan 2020 - "I still live with a faint sense of possibility that public life can progress, and that the forces of liberalism and social democracy (and hopefully decency, but that’s never guaranteed) will take power."

Thursday, 12 Dec 2019 - As always, I muse about the city, which, these days, I explore less extensively.

Tuesday, 22 Oct 2019 - In fact, the wing keeps on shifting some of its paintings, which gives museumgoers a chance to see pieces of the immense collection that the Met has been warehousing for years.

Saturday, 12 Oct 2019 - Ta-Nehisi Coates’ book . . . appeared at just the right moment, when the media was saturated with cases of police acting unprofessionally, destructively and sometimes murderously in their dealings with young black men.

Saturday, 28 Sep 2019 - For Trump, lying is like breathing — it’s instinctive and devoid of shame or guilt.

Saturday, 7 Sep 2019 - Much of the city’s urbanscape gains its character from the people and dramas that can provide solace, however dark one's personal mood.

On the death of an artist and friend: Jonathan Baumbach remembered

Saturday, 3 Aug 2019 - It’s not Jonathan the man I want to write about, but how he defined himself as an artist, which he saw as a moral imperative—his life’s prime and most passionate commitment.

Sunday, 14 Jul 2019 - When I am in the city l still try to walk a great deal, closely observing the people who pass by me on the street.

Friday, 7 Jun 2019 - As he always has done, Scorsese spoke about film with passion, encyclopedic knowledge and a belief in the greatness of the medium.

Thursday, 25 Apr 2019 - The solution to the problem of store vacancies is hard to achieve. In 2017 there were 200 empty storefronts on Broadway alone.

Friday, 15 Mar 2019 - Rackstraw Downes' paintings would best be described as realist with his sustained, meticulous and intensive outdoor working process, and paintings that draw attention to what is characteristic of the 21st-century cityscape.

Saturday, 23 Feb 2019 - There is nothing unique or wrong in de Blasio’s mix of an affirmation of progressive principles and acting as a practical politician.

Saturday, 19 Jan 2019 - I wanted to leave my parochial Bronx and take greater risks, care less about a secure future, and act out some of the wilder dreams I harbored.

Sunday, 9 Dec 2018 - Predictably, once the artists settled on these streets, this small neighborhood with cobbled streets slowly gentrified.

Thursday, 8 Nov 2018 - One result of the election is that the country is even more divided between rural and suburban, big-city America—not so different than Europe where right wing parties have their support in small towns and rural areas outside cities like Warsaw, Berlin and Budapest.

LEONARD QUART: Hobbling about and Kavanaugh

Saturday, 6 Oct 2018 - What is troubling is not Trump’s predictably crass and sadistic behavior, but the support Kavanaugh has aroused from a sizable portion of the public.

Saturday, 15 Sep 2018 - Of course, there is the political world, which somehow I continue to obsess about -- aching and all.

Tuesday, 21 Aug 2018 - Spike Lee's new film "BlacKKKlansman" contains some flaws but, though set in the 1970s, often transcends its weaknesses to heavy-handedly but powerfully evoke our current Trump-dominated era, one in which an unembarrassed racist is in power and the alt-right, including neo-Nazis, has been resurrected.

Saturday, 11 Aug 2018 - When I feel the need, I often invoke images of my prosaic East Bronx neighborhood, which was then an intact, primarily Jewish working-class and lower-class/middle-class mix of a few Art Deco apartment buildings, a few private homes, and many five-story red brick walk-ups and gray tenements.

Tuesday, 24 Jul 2018 - My encounter is the kind that you could easily have in the city if you ask the right questions, and have the patience to sit and listen closely to another person’s revelations.

Friday, 13 Jul 2018 - His aggressive intrusion into British politics only heightened the anger of a large portion of the British public.

Saturday, 7 Jul 2018 - I often stopped there for a latte from one of its kiosks, or just sat there either reading the Times or observing people before class.

QUART: Journey into the past

Sunday, 27 May 2018 - My wife is a painter enamored with color, so we visited a number of London’s art museums.

Wednesday, 25 Apr 2018 - I like the way the city and Central Park interact — the feeling that one can find both seclusion and peace as well as communal excitement.

LEONARD QUART: Marching with the young

Sunday, 25 Mar 2018 - My political anger towards those who hold power remains intact. But today on an NYC March I began to feel something has changed.

Tuesday, 6 Mar 2018 - “I think that the greatest thing that our art does and our industry does is to erase the lines in the sand. We should continue doing that when the world tells us to make them deeper." -- Oscar-winning director Guillermo del Toro