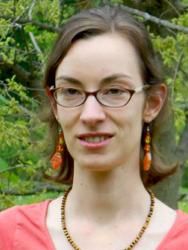 Kateri Kosek grew up in the Hudson Valley but has lived in or near the Berkshires for several years. She teaches English and writing at various colleges, and at the Renaissance Arts Center in Great Barrington. Her lifelong love of birds has always found its way into her poetry and essays, which have appeared in many literary journals, including Orion.

Friday, 7 Sep 2018 - Over 50 local cultured vendors are slated for this year, including many new ones such as NYrture Food talking about natto (fermented soybeans) and Maple Valley Creamery making special batches of cultured ice creams for the fest (including pickle ice cream!).

IN THE FIELD: Two birds, two extremes of habitat

Tuesday, 28 Aug 2018 - Neither bird I was after breeds in the Berkshires, but the places that contained them—a mountaintop, a grassland—struck me as reflective of the diversity of habitats around us.

IN THE FIELD: Attracting birds in warm weather

Monday, 16 Jul 2018 - Thrushes are not particularly known for eating suet, or for coming to feeders of any kind, but it hung around for five days or so, even flying out from under the porch steps one day.

Sunday, 20 May 2018 - These poems don’t demand pity; their tone is strong like the women ultimately are. She is reading her poems this Tuesday, May 22, at the Lee Library, along with the renowned poet Charles Rafferty. The reading is at 5:30 p.m.

IN THE FIELD: Horned larks and waterfowl

Monday, 23 Apr 2018 - Similar to many open grassland birds, larks have declined about 2 percent a year since the 1960s, making the 2014 State of the Birds list of “common birds in steep decline.”

IN THE FIELD: Sandhill cranes

Saturday, 17 Mar 2018 - This is not a bird one associates with the Northeast. Sandhill cranes breed across most of Canada into Alaska, dropping down into the upper Midwest and the Mountain West.

IN THE FIELD: Birds of winter

Monday, 5 Feb 2018 - It is refreshing to hear these noisier-than-usual sparrows chattering this time of year when it is otherwise so quiet.

IN THE FIELD: American Woodcock

Monday, 10 Apr 2017 - The woodcock begin their displays at dusk, usually right around the time it turns dark enough to not see things very well. The show is mostly auditory.

Thursday, 8 Dec 2016 - Hannah Fries, former poetry editor of Orion magazine in Great Barrington, is the first Berkshire author to be published by Hedgerow Books, an imprint of Levellers Press in Amherst. She will be reading at The Bookstore in Lenox at 5:30 p.m. Friday, Nov. 9.

Scoby? What’s a scoby? Fermentation comes to the Berkshires

Tuesday, 11 Oct 2016 - Fermentation is an ancient strategy for food preservation, and brings health benefits and unique flavors. Many fermented foods are so common, they aren’t described as such. Think bread, yogurt, beer, even cheese.

IN THE FIELD: Revenge of the lawn

Saturday, 20 Aug 2016 - If our goal is to surround our homes with sterile patches of uniform green, in pursuit of some vision of suburban perfection, even while raising cancer risks for our children, we should probably reevaluate our priorities.

IN THE FIELD: Why birds?

Tuesday, 14 Jun 2016 - I can’t remember a time when I wasn’t interested in birds. When I was eight, I started keeping a little journal of the birds I saw. I love how birds have an “otherness” emblematic of the natural world as a whole

IN THE FIELD: Birds close to home

Tuesday, 24 May 2016 - The combination of predictability and surprise makes a well-known route rewarding, whether one is birding or enjoying it in some other way.

IN THE FIELD: Hermit Warblers and Rusty Blackbirds

Saturday, 26 Mar 2016 - Right now, Hermit Warblers should be in tropical wintering grounds in Mexico or Central America, but one little vagrant was spotted in Connecticut in February.

Renaissance combines arts with wellness — for all ages

Saturday, 20 Feb 2016 - “Our goal has been to make a difference in the cognitive and emotional wellbeing of children and adults of all ages.” -- Pat Navarino, director of Renaissance Arts and Wellness Center

IN THE FIELD: The Great Horned Owl

Sunday, 7 Feb 2016 - One early field guide accused the Great Horned Owl of suggesting “every form of dark emotion by its voice.”

IN THE FIELD: The scourge of light pollution

Sunday, 3 Jan 2016 - One of the joys of living in a largely rural area is supposed to be the darkness of the sky, the sharpness of the stars on a clear winter’s night.

IN THE FIELD: Common nighthawk

Friday, 27 Nov 2015 - Common nighthawks have one of the longest migration routes among North American birds, wintering all the way in South America.

Saturday, 26 Sep 2015 - Giannini creates a pleasing blurring of lines, a moving between worlds ... it is not your world, but it is.

IN THE FIELD: Migrating songbirds, calls in the dark

Sunday, 20 Sep 2015 - While we may be able to predict which species, how many, when, observing birds in the wild is still at heart about the sheer pleasure of their unpredictability.

Sunday, 23 Aug 2015 - “More people are getting what it means to be out in nature. We get so keyed into electronic stuff, but the literature is out that there’s such a mental health benefit to time spent in nature. -- Deborah Phillips

IN THE FIELD: Indigo bunting, the dazzling songster

Thursday, 13 Aug 2015 - Indigo buntings are easier to see than many birds, because, in addition to living in open habitats, they like to find the highest perch and stay there, singing.