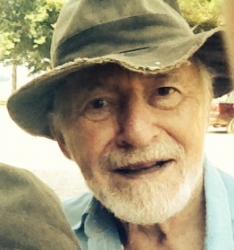 Jon Swan is a poet, translator, and journalist, who lived for forty
years in the Berkshires and now lives in Maine. His website is
jonswanpoems.com

POEM: Get Over It, Kids!

The Sandwich Board Man at the Corner of Bolsonaro and Fifth

Wednesday, 20 Nov 2019 - and the heat underfoot is getting hotter, as if the street’s on fire, and nobody can put it out

Saturday, 13 Jul 2019 - A dash of doggerel about dystopia, dictators,  and an Airedale.

Wednesday, 12 Jun 2019 - Spinal Tap! The Back Story of a Crippling Disease   When the article describing moral fibrosis, (including the protocol for diagnosis) appeared in the pages and under the aegis of the New England Journal of Medicine a century ago,   who knew? who could possibly know that the disease would wait latently to break out blatantly […]

Poem: Conzoomerism, as the World Burns

Saturday, 12 Jan 2019 - The press is in on the consumer game, hustling glamor, bewitched by fame.

Poem: Dumb as a Rock

Monday, 19 Nov 2018 - Everyone agreed it was a bad hair day… And the president chose to watch TV, high and dry and far from the fray...

POEM: The King of Bedlam

Saturday, 10 Nov 2018 - The King of Bedlam is a portly tun whose three-legged stool he takes for a throne.

POEM: The Launching of the Slingshot Ride

Tuesday, 23 Oct 2018 - you grip the sides and start to scream with something that is akin to laughter

POEM: The reading of the deed

Tuesday, 25 Sep 2018 - Don’t just stand there staring when water’s seeping in under the kitchen door

Thursday, 23 Aug 2018 - “When our slippery ancestor wriggled onto shore   it could not guess what lay in store”  (Anon.)

Thursday, 19 Jul 2018 - the main difference is one was entertaining fiction, the other factual and deeply creepy

POEM: Portrait of POTUS at Play

Friday, 23 Mar 2018 - Jon Swan's poem about the relationship between Trump and Putin that may not speak its name.

POEM: Witness for the Prosecution

POEM: In the Waiting Room of the West Mountain Clinic

Wednesday, 17 Jan 2018 - “We are here because one odd group of fishes had a peculiar fin anatomy that could transform into legs for terrestrial creatures…” -- Stephen Jay Gould

Shrinking the sanctuaries and ‘the last Trump’

Monday, 8 Jan 2018 - Now whatever was gained in the past is being lost at record speed, with neither Trump nor Interior Secretary Ryan Zinke showing any interest in being a good steward of the Almighty’s creation.

Tuesday, 19 Dec 2017 - With a friend like the United States, what freedom-loving people – from the native tribes of New England to the self-liberated people of the Philippines – needed an enemy?

POEM: Heroes of the Senate!

Saturday, 2 Dec 2017 - While the President Unraveled, They Stuck to their Knitting

Two Tough Guys and “The Course of Empire”

Monday, 13 Nov 2017 - The president’s men are lining up, waiting to see who’s next in line to follow the norms out the window and crash-land on the White House lawn.

POEM: It Happened One Night … in Alabama

Monday, 2 Oct 2017 - The crowd unzips like the Red Sea back in the day – and the dog bounds up onto the podium and gripping it with both paws, becomes POTUS!

Sunday, 3 Sep 2017 - Two poems about President Donald Trump: “Of him it can truly be said he is all bully and no pulpit.”

Two POTUS poems: Face-off in the Nursery Ward; One for the Groper

POEM: Face-off in the Nursery Ward!

POEM: Dreams of a Leader

POEM: Taking a Spin in a Fine-Tuned Machine

Saturday, 25 Feb 2017 - Treating the rules of the road with executive scorn, he gives the finger to drivers and leans on his horn

Wednesday, 15 Feb 2017 - The boy only grinned and shouted back, “Backward goes faster than forward. Look how fast I’m going already!”

POEM: From George to Donald — The Countdown

Thursday, 19 Jan 2017 - Washington to Trump: From Founding Father to the Liars Club.