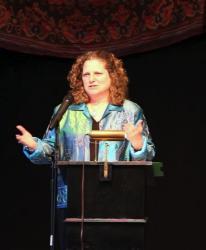 Jennifer Browdy, Ph.D., teaches comparative literature, gender studies and media studies at Bard College at Simon’s Rock. She is the Founding Director of the Berkshire Festival of Women Writers, the co-publisher of Green Fire Press, and blogs at Transition Times. Her new book, What I Forgot…And Why I Remembered: A Purposeful Memoir of Personal and Planetary Transformation, will be published in 2015.

Thursday, 3 Dec 2015 - I want to be able to write a letter to future generations that tells proudly how in my time, we stood up in the face of impending disaster and made the necessary changes in lifestyle, industry and economy.

EDGEWISE: On this Thanksgiving generosity for refugees — past and present

Thursday, 26 Nov 2015 - Let us remember the real roots of this holiday: The generous spirit of the indigenous ancestors of America, who welcomed the first European refugees.

EDGEWISE: After Paris, searching upstream for the source of terrorism

Thursday, 19 Nov 2015 - If we really want to defang the terrorists, we should stop selling them weapons, for starters.

Thursday, 12 Nov 2015 - Goliath is now us, ordinary citizens linked together through the Internet, working together to make our dreams and visions real.

Thursday, 5 Nov 2015 - It was no accident that the realization of equality for gay Americans was preceded by a good decade of arts activism.

Thursday, 29 Oct 2015 - The silver lining of this autumn of our discontent is that the streets and proverbial water coolers of Great Barrington are suddenly buzzing with neighbors newly engaged with the civic life of our town.

Thursday, 22 Oct 2015 - We are the stewards of our community, and every decision we make matters. Letting our high school slide into disrepair…letting the character of our Main Street be lost.

Thursday, 15 Oct 2015 - When I look at myself objectively, I have to laugh at my stubborn belief that those in power have the best interests of the general public in mind. You’d think that by now I would have learned to be suspicious and watchful of everyone who makes decisions on behalf of the rest of us. On […]

Thursday, 8 Oct 2015 - It’s time to do whatever it takes to stop these horrendous massacres by tightening up the sale and possession of firearms, making sure that only those who are well trained and mentally sound can legally possess them.

EDGEWISE: The President, the Pope, the women of the world

EDGEWISE: The Pope, the equinox and the moon

Thursday, 24 Sep 2015 - Pope Francis, in his impressive Encyclical on the environment, shows himself to be fully aware of the interlocking cause and effect of politics, industry and environmental destruction.

Thursday, 17 Sep 2015 - "It should not take a burning Torah or a flaming cross to make us form a bucket brigade." -- Letty Cottin Pogrebin

Thursday, 10 Sep 2015 - I wonder, would we in the Berkshires respond to a sudden influx of several thousand newcomers from a faraway war-torn land?

EDGEWISE: Owen Labrie, ISIS, and the culture of rape

Thursday, 3 Sep 2015 - I want to live in a world where this kind of treatment of women would be unthinkable to any man.

EDGEWISE: Bernie Sanders: Is a new American Revolution at hand?

Thursday, 27 Aug 2015 - Bernie Sanders may be an unlikely hero, but he’s got the guts to be out there speaking truth to power in ways that no one else in the Democratic Party seems willing to do.

Thursday, 20 Aug 2015 - St John, just across the Bay of Fundy in New Brunswick, has been expanding its deepwater port, serving as a tanker depot for oil and gas. This is where the disputed gas pipeline that would run through Berkshire County would end up.

EDGEWISE: StoryCorps, storytelling from the heart

Thursday, 13 Aug 2015 - “If we spent more time listening to each other, instead of screaming at each other, we’d be a much stronger, happier country.” -- David Isay, founder of StoryCorps

EDGEWISE: Somewhere over the rainbow, a sustainable future

Thursday, 6 Aug 2015 - Maybe all the rainbows we’ve been seeing lately have a message for us about the pots of gold, both real and metaphorical, that await us on the other side of the storm of climate change.

EDGEWISE: Cultivating confidence, women and girls leaning in to leadership

Thursday, 30 Jul 2015 - I believe that if more women had the confidence to step into their potential as creative leaders, our world would be a more interesting, vibrant, and kinder place.

Thursday, 23 Jul 2015 - The power of the human imagination to empathize deeply with others is our most valuable trait. It holds the seed of the vision of world peace and ecological harmony.

EDGEWISE: Keeping teenagers healthy, happy by putting them to work

Thursday, 16 Jul 2015 - In a time when too many teenagers seem to spend an inordinate amount of time exercising only their fingers — playing video games — it’s good to see a funded jobs program for teens that demands physical fitness, and leaves the participants with a healthy tiredness at the end of the day.

Thursday, 9 Jul 2015 - The Vancouver final game was watched by 25.4 million viewers on Fox — a record for any soccer game, men’s or women’s, shown on English-language television in this country.

Thursday, 2 Jul 2015 - What a month it’s been! In just the past couple of weeks, the Pope made a passionate argument underscoring the need for humans to respect not only other humans, but other species and all life on Earth, while the U.S. Supreme Court affirmed the right of all Americans, no matter their sexual orientation, to civil […]

Thursday, 25 Jun 2015 - Today, I am grieving the beautiful souls gunned down in their place of worship, where they were working together to build a better world.

Thursday, 18 Jun 2015 - The American working world is rarely family-friendly. The Pew study found that “16 percent of working mothers and 15 percent of working fathers say it is very difficult” to balance the responsibilities of work and family life.

EDGE WISE: Peering beneath the mask of masculinity

Thursday, 4 Jun 2015 - The film, ‘The Mask You Live In,’ establishes clear connections between what one expert called “the pandemic of violence in America” and the repressed anger and hurt of boys and young men, as well as a narrow definition of masculinity that equates “being a man” with physical force, sexual conquest, and economic success.

EDGE WISE: It’s On Us — Reflections on campus sexual assault

Thursday, 28 May 2015 - College-aged women are four times more likely than any other age group to face sexual assault and in 90 percent of reported cases, the victim is acquainted with his or her attacker.

Thursday, 21 May 2015 - Now, as never before, we have an opportunity to come together as a global society to wage peace in the name of survival…and beyond survival, prosperity. It will take ordinary people like you and me acting each in our own locales.

Thursday, 7 May 2015 - This Mother’s Day, by all means shower your mother with flowers, chocolates, and love. But let’s also think more deeply about the tremendous contribution mothers make every single day, and how we might work together to ease their burdens and give them the recognition and rewards they so heartily deserve.

Thursday, 30 Apr 2015 - Disasters make us wake up and realize all over again how precious life is, and how important health and security are to human happiness. Even here in the placid Berkshires, we need to think about disaster prevention and preparedness. No, we don’t live in an earthquake zone, and no, I don’t see any riots on the horizon in quiet little Great Barrington. But there are some big issues brewing that we do need to be paying attention to now, before they become runaway disasters.

Thursday, 23 Apr 2015 - Joanna Macy calls our time “The Great Turning,” a critical transition time in human history on the planet, during which we will either learn to live harmoniously and sustainably as stewards of the Earth, or we will be swept away into the maelstrom of the Sixth Great Extinction, caused by our own carelessness and ineptitude.

EDGE WISE: The future is ours to create…or destroy

Thursday, 9 Apr 2015 - Can anyone doubt that climate change is real and upon us, already melting the glaciers, acidifying the oceans, and setting off droughts, floods and storms of Biblical proportions? The question is, now that we are aware, what are we to do?