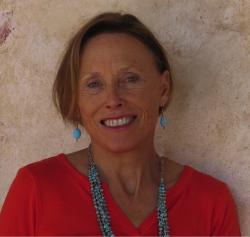 Honey Sharp settled in the Berkshires full time many moons ago when she
opened Honey Sharp Gallery and Ganesh Cafe in Lenox, Mass. Married to
David Lippman she had three children and kept serving on various nonprofit boards. With a love for gardens, the environment and design, she became a landscape designer and worked for 14 years as the garden editor for Berkshire HomeStyle. She divides her time now between the Berkshires and Mexico where she rediscovered her passion for photography. Visit her at her blog at: www.honeysharp.com .

Saturday, 15 Aug 2015 - I love how Alford has managed to maintain its identity, call it cachet, since the 18th century. With its perfectly proportioned, white steepled church, clapboard town hall and one room school house, it appears set in a time capsule.

Monday, 27 Jul 2015 - I love how cairns possess a borderline quality – not just by defying gravity or remaining anonymous but in straddling randomness in nature with creativity.

OVER THE BORDER: Cacti and politics

Tuesday, 20 Jan 2015 - "This is about justice. We have a responsibility to both nature and people. As a bridge to the community, we are paying attention to what’s going on in Mexico and in the world. -- Mario Hernandez, director of the El Charco del Ingenio botanical garden in San Miguel de Allende, Mexico

The Bottle Bill: An Ongoing Battle

Monday, 27 Oct 2014 - According to the Massachusetts Sierra Club, the added incentive of a nickel deposit has enabled 35 billion bottles to be recycled in the Commonwealth.

Harvesting the sun, or how we ‘went solar’

Thursday, 16 Oct 2014 - I decided to investigate the solarize program launched by Gov. Deval Patrick and spearheaded locally by Malcolm Fick with the town’s Energy Committee as well as Juliette Haas of Egremont. Calculations showed that a free-standing structure with 20 photovoltaic panels would provide 100 percent of the electrical energy that we typically consumed.

Reflections on the People’s Climate March in New York

Saturday, 27 Sep 2014 - "Notwithstanding the daunting prospect of climate disruption, we now know that the troops are there for the long fight, and they're in good spirit!" -- Tom Stokes of Stockbridge, coordinator of the Pricing Carbon Initiative, and one of more than 300 Berkshire residents who took part in the Climate March.

Monday, 1 Sep 2014 - Over the past decade or so, Great Barrington has emerged as a mini-culinary capital in New England. Michael Ballon has been at the forefront of our growing culinary awareness, appreciation and practices.

The Carrot Project: Helping farmers, one microloan at a time

Thursday, 28 Aug 2014 - “There is a generation of young people eager to farm; however, they do not know where to turn.” -- Lisa MacDougall of Mighty Food Farm, a 2009 Microloan recipient

Gideon’s Garden: So others may eat

Wednesday, 16 Jul 2014 - “Gideon’s Garden is the best thing. It’s such a pleasure partnering with them. They have a big heart; they care about everybody.” --George Laye, director of the Guthrie Center

After the flood, restoring the Mount’s gardens — again

Thursday, 3 Jul 2014 - 'There’s been a huge outpouring of support from our members and the community. Many have offered to volunteer but we really need to focus on our existing team. Most importantly we need to emphasize to the public ongoing events such as the Jazz Café on weekends, the lecture series and theater. We’re known now for our many programs and been called the literary hub of the Berkshires.' -- Susan Wissler, executive director, The Mount

Food Justice: So others may eat

Thursday, 26 Jun 2014 - According to the Food Bank of Western Massachusetts, roughly one in eight people continues to experience hunger in this part of the Commonwealth, an eye-opening fact. Furthermore, one in five children lives in food-insecure households.

Friday, 30 May 2014 - Eighty-one trees will be planted from Taconic Avenue to Cottage Street, more than doubling the number of trees that currently border Main Street.

Thursday, 15 May 2014 - The bottom line is that Bradford pear trees can become a hazard and as many towns across the U.S. have discovered, these somewhat fad-like cultivars did not make for good street trees, especially if planted en masse.