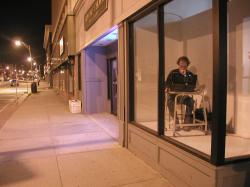 Gary Leveille’s ‘Legendary Locals’: Who we’ve been, who we are

Monday, 15 Jun 2015 - In its 127 pages containing 150 profiles, and references to many more South Berkshire residents, past and present, the answers to who we are may surprise you.

Wednesday, 3 Jun 2015 - “This is an investment by local people. And we’ll be creating a shared environment for our customers and for the town, a virtual downtown resort, where our visitors will find destinations for entertainment, culture, shopping and dining within walking distance." --- Chrystal Mahida, owner of 79 Bridge Street Realty, the future developer of the Searles School

Friday, 29 May 2015 - "It’s easy to think that if you don’t come from a big metropolitan area, you don’t have a shot. But I’ve conducted all over the world. You have to believe that it’s possible. Nothing comes easy. The true joy in life is to be at your best because you’ve worked hard to develop your craft. Then when you nail it, nothing is better than that.” -- Conductor Matthew Savery, who grew up in Lee, Massachusetts

Wednesday, 20 May 2015 - Five-term Selectman Deborah McMenamy, a determined advocate for new Police Chief Robert Eaton and his style of running the department, was defeated in her quest for a sixth term. Her opponent, Ernest Cardillo, who campaigned as “the voice of the people,” won the 3-year term on the Board of Selectmen by a margin of 52 votes, 334 to 282.

Sunday, 17 May 2015 - Rogue Angel Theatre is local, live and outrageous. Its next production is "The Lift," a multimedia event that takes place in an elevator in a Pittsfield warehouse.

Wednesday, 13 May 2015 - Usually, the so-called “baby” town meeting attracts little attention and less attendance. This year, however, the session was far from routine, very contentious, and packed with concerned citizens. The Town Hall conference room was jammed to capacity with more than 100 residents, and if this session were any indicator, next week’s May 18 Annual Town Meeting could be a real donnybrook.

Friday, 10 Apr 2015 - “The Pillow build audiences for dance year-round, and one of the ways in which we do that is through our partnership with MASS MoCA. Audiences will be wowed by KEIGWIN + COMPANY’s unstoppable energy and style.” -- Ella Baff, Executive and Artistic Director of Jacob's Pillow

Thursday, 19 Mar 2015 - In keeping with the annual appearance of this trying period that tests our talent for nimble handling of the steering wheel to dodge those pesky chasms in the pavement and to vault the rolling frost heaves, we invite our readers to send us photos of worst pothole they’ve encountered.

Wednesday, 18 Mar 2015 - Joan was very active in the community: She was a weather spotter, founding member of ambulance squad, a member of Thursday Morning Club. the Alford Gardening Club, the Alford Cemetery Commission, and a member of the Ski Patrol at Stratton Mountain, Vermont.

Monday, 16 Mar 2015 - After graduating from Pace University, he went on to become the Chief Executive Officer of Stakelum-Lints Inc., a prominent oil delivery company based in Cedarhurst, Long Island.

Monday, 23 Feb 2015 - "Gilded Age estates are the Berkshires. They are the distinguishing characteristic of our region, like the great country homes of England." -- Laurie Norton Moffatt, Director and CEO of the Norman Rockwell Museum "Restoring Elm Court in this way is like embalming a corpse. It's a trade off, more than a fair trade." -- Gregory Whitehead, speaking for the Old Stockbridge Road Neighborhood Association

Thursday, 19 Feb 2015 - "We have to find a way to make it possible -- and attractive -- for families with children – young families – to come into town and settle here. That’s my first priority." -- Bill Cooke, on one of the reasons he is seeking to run for the Great Barrington Selectboard

Desegregating the Berkshires – 54 years ago

Monday, 16 Feb 2015 - "My Tanglewood roommate, James Tranks, an African American double bass player from Philadelphia, walked into a barbershop in Great Barrington which immediately pulled down its blinds and told him the barbershop was closed. The same thing happened at a second barbershop in Great Barrington shortly thereafter and in Lee the following day." -- Tanglewood Fellow Jim Levinson, recalling an incident in the summer of 1961

Luxury hotel to be proposed for Searles School complex

Thursday, 12 Feb 2015 - "You could imagine that demolition is anathema to historic preservation. On the other hand, you could get a new structure that pays homage to history. It all depends on what the Selectboard is willing to do.” -- Town Planner Christopher Rembold

Saturday, 31 Jan 2015 - "Sustainable economic development will occur because our regions will be far more attractive to young entrepreneurs and investors when we are connected again by passenger rail to New York, and to the world.” -- Train Campaign founder Karen Christensen of Great Barrington

Wednesday, 17 Dec 2014 - "We’re a theater company that develops new plays. So it stood to reason (at least in my mind at 1 a.m.) that we should at the very least be entertaining in our appeal and do what we do best … present new plays. And thus, a fund-raising idea was born." -- BPL Artistic Co-Director Joe Cacaci

Monday, 27 Oct 2014 - "The show investigates and documents the apparent American need, or drive, for war, from the day the first settler arrives from elsewhere." -- Writer Phil Johnson

Bits & Bytes: Food for the homeless, Farm Games, and an Autumn Social

Thursday, 23 Oct 2014 - "We set up a table at the Farmers Market in Pittsfield with a full place setting and a sign that simply says ‘support our farmers while caring for our homeless -- buy something today and leave it on this table.’ " -- Eddie O'Toole, Social Responsibility Committee of Unitarian Universalist Church

Monday, 20 Oct 2014 - Among the opportunities at the FilmColumbia festival is a screenwriting panel during which audience members are invited to submit a scene from an original screenplay that the panel of actors will read through live.

Sunday, 19 Oct 2014 - At the Great Barrington Fairgrounds, October 25, a day of pre-Halloween festivities, including the screening of Tim Burton's "The Nightmare before Christmas." On Tuesday, Oct. 21, there's a Berkshire Hills School Committee candidates forum at the Senior Center; and an exhibit of work by Jacob Fossum opens at Simon's Rock.

Wednesday, 15 Oct 2014 - BerkshireSpeaks: Seven pioneering speakers will present their visions of what it will take for the Berkshires to thrive and prosper in the coming decades.

Tuesday, 14 Oct 2014 - This year’s Berkshire Shorts will feature a block of contest entries in “The 30 Day Film Challenge,” a contest in which local filmmakers had 30 days to write, shoot and edit short films.

Tuesday, 30 Sep 2014 - The fund is in honor of the class instructor, Bob Landau, for his ultimate dedication to health and wellness, and for connecting people with a common purpose. -- Berkshire South Regional Community Center Executive Director Jenise Lucey

Promenade to celebrate the season

Sunday, 21 Sep 2014 - The audience moves from location to location through the majestic property of Gedney Farm.

Monday, 15 Sep 2014 - Polio is something I never talked to anyone about. Since the age of 10 I’ve not had this conversation with another person who’s had polio. -- Karen Chase, author of "Polio Boulevard."

Tuesday, 26 Aug 2014 - "Great Barrrington is the only community in Berkshire County with a large business center that does not employ a split tax rate." --School Committee member Richard Dohoney

Fizz, boom and read at the Mason Library

Traffic, traffic everywhere, and not a place to park

Tuesday, 12 Aug 2014 - "We have identified 79 parking spots – 60 in lots and 19 along side streets – but I need more help in selling this to merchants." -- Parking Task Force Chair Jennifer Clark

Tuesday, 5 Aug 2014 - 'We are not against Elm Court. We encourage smart growth, but this is the commercialization of a rural neighborhood.' --Old Stockbridge Road resident Barney Edmonds

Friday, 25 Jul 2014 - “It’s a cycle. We’re at the end of the automobile cycle. It’s now cutting edge to realize that a private company can make a buck at passenger rail service.” -- Housatonic Railroad President John Hanlon