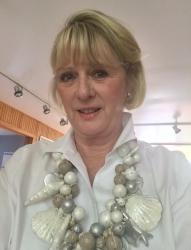 Dianne Salamon has resided in Mount Washington and Manhattan for many years but most recently spends much of her time in the Berkshires. Dianne is involved in numerous volunteer activities. It started when she got involved with Volunteers in Medicine Berkshires (VIM), 10 years ago, fulfilling many roles in the planning and execution of the Annual Galas.
More recently she was worked with The Council on Aging (COA) of Egremont and Mount Washington, creating events for area seniors. Most recently she was elected to Vice-President of the Mount Washington Historical Society. Dianne enjoys activities such as golf, gardening and the gym. She lives with her husband Lenny Salamon and new Doberman puppy, Bodie. Her son , Zachary, lives in New York City working in the Financial world.

Sunday, 26 Jan 2020 - A new brewing company, restaurant and bar gets the seal of approval from U.S. Representative Antonio Delgado.

Saturday, 15 Oct 2016 - The seniors of both towns were celebrated, but particularly nonagenarians (90-year-olds) Abbey Rubinstein and Kenneth Frye.

Monday, 26 Sep 2016 - 'Town Among the Clouds,' which was produced in 2003, about the past and present lives of the uniquely bonded community of Mount Washington still resonates in 2016.

Sunday, 5 Jun 2016 - Throughout the walk and lunch, people had the chance to reconnect with old friends but, more importantly, to make new friends.

Celebrating the life of Beverly Almond of Egremont

Saturday, 9 Apr 2016 - Beverly Almond was posted at a secret location called Station X outside London which, today, is acknowledged as Bletchley Park, the code-cracking operation that intercepted numerous key communications from the Axis powers.

Program offers advice to seniors about being scammed

Friday, 13 Nov 2015 - Egremont Chief Police Brian Shaw came by to add his support and concern about scamming. He was so informative about the different approaches "The Scammers" take.

Monday, 26 Oct 2015 - Egremont Selectman Charlie Flynn presented a citation of recognition from the State of Massachusetts to our five present nonagenarians.

Friday, 25 Sep 2015 - On a glorious fall day, recreating the experience and setting of school days in the early 1900s in Mt. Washington.