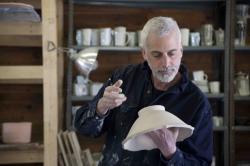 Veteran Berkshire journalist Daniel Bellow has written for newspapers and magazines hereabouts since 1987, but is perhaps better known for his more recent work as a ceramic artist. He lives in Great Barrington with his wife Heather, children Stella and Benjamin, and his faithful dog Ringo.

BOOK REVIEW: ‘FDR on his houseboat’: A president in the making

Saturday, 10 Dec 2016 - “There he [FDR] was, flat on his back with nothing to do but think. He began to read, he began to think, he talked, he gathered people around him, his thoughts expanded, his horizon widened. He began to see the other fellow’s point of view.” --- Louis Howe, friend of FDR

By 1 vote, Sheffield returns to an appointed Finance Committee

Tuesday, 4 Aug 2015 - “The Finance Committee is an advisory board. I prefer to choose my own advisors rather than have them chosen for me by three people.” -- Mark Bachetti

Thursday, 2 Jul 2015 - "We were a paper making town. It was our bread and butter. Now it’s gone. There’s nothing we can do about it. We’d like to see something useful here instead.” -- Lee Selectman David Consolati

Thursday, 4 Sep 2014 - The latest Boston Globe poll shows the Democratic and Republican front-runners Martha Coakley and Charles Baker in a virtual dead heat, should the election be held today.

‘Polio Boulevard’: A courageous account of illness and recovery

Wednesday, 3 Sep 2014 - The strength required to survive such an ordeal is more than ought to be demanded of any nine-year-old girl at any moment in history.

Tuesday, 17 Jun 2014 - Northeast Utilities had proposed to construct the world’s largest pump storage hydroelectric facility, drowning Plantain Pond on the heights of Mount Washington and most of Sheffield south of the village under two lakes.

Part I. Big, bad things that never came to pass: A short history of environmental activism in the Berkshires

Wednesday, 4 Jun 2014 - In 1964, Mount Greylock Tramway Authority planned to transform the highest mountain in Massachusetts into a downhill ski area with a 100-foot tower on the 3,491-foot summit of Mount Greylock for the “world’s largest” aerial tramway.