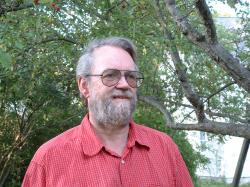 Bernard A. Drew, his wife, Donna, and daughters have lived in Great Barrington since 1977. He is a newspaper editor and columnist and the author of local Berkshire histories including books about Great Barrington, Monument Mountain, Lake Buel, Beartown, the Knox Trail and, nearing completion, 18th and 19th century waterpowered industry on the Housatonic River. He likes to explore the woods and find the unexpected in plain sight.

Articles by Bernard A. Drew

Saturday, 18 Jan 2020 - Hilary Russell weaves the tugboat history into a telling of his personal quest to learn more about his family

A conversation with Lonnie Bunch, now head of the Smithsonian Institution

Monday, 3 Jun 2019 - He plans to deal with the issues of slavery and racism head-on, yet in a creative and, for whites, comfortable manner.

The Rubber Bridge must bounce back

Sunday, 23 Dec 2018 - That Day came up with such a bold housing plan is remarkable; that he did so in concert with the priest is further amazing, allowing as he did the opportunity for the parish to sell building lots to help fund its church construction.

Saturday, 16 Jun 2018 - There are still 10 of these purpose-built showrooms in adaptive reuse in Great Barrington. They now house a variety of businesses.

History markers in curious places: A quiz for Berkshire explorers

Monday, 23 Apr 2018 - Why are we honoring a massacre? On the other hand, how many monuments are there to Native American maltreatment? It’s a rare admission of how fiercely we wrestled New England from its indigenous people.

Sunday, 11 Mar 2018 - While few of us will miss the tollbooths on the Mass Pike, it’s fascinating to learn that some two-centuries-old tollhouses are still intact in the greater Berkshires.

Architect Hugh Hardy, who restored the Mahaiwe Theatre, dies at 84 in Manhattan

Monday, 27 Mar 2017 - Architect Hugh Hardy’s Berkshire roots ran deep. When redemption for the Mahaiwe was in the offing, a better architect couldn’t be imagined than Hugh Hardy. As a child, he had attended movies at the Mahaiwe during summers.

Monday, 12 Dec 2016 - … Ye Holidays are just upon ye Towne and ye Boyes, of wh I counte mine owne selfe as I have beene payntinge ye Towne a gorgeous Crymson and have whooped it uppe...

Taconic Avenue: The year the town made a wise decision

Sunday, 2 Oct 2016 - There was public pressure for a better way to reach the Berkshire Heights interior. The grade-level Castle Street/railroad crossing was extremely dangerous.

Monday, 23 May 2016 - In the shadows of big brothers and sisters, very small buildings served important purposes and have stories to tell. Sometimes rich stories.

The river bridges (20) of Stockbridge

Tuesday, 23 Feb 2016 - Stockbridge — with the accent on “bridge” — has had more bridges over the Housatonic River than any of its neighbors, a remarkable 20 highway, foot, trolley and railroad spans. That’s as many as many as Great Barrington and Sheffield combined. Ten of Stockbridge’s bridges are still in use.

Friday, 25 Dec 2015 - The good news of the trains was, they took our textile, paper, dairy and other products to market. The bad news was, the tracks crossed country roads.

The Brooklyn of the Berkshires – and its four bridges

Thursday, 26 Nov 2015 - The neighborhood known as Brooklyn was so-called because many guests at the Berkshire House hotel at the corner of Main and Bridge streets were from Brooklyn, N.Y., and it was hoped they could be persuaded to buy land and build homes there.

Great Barrington on the move

Thursday, 8 Oct 2015 - The earliest recorded moving of a house in Great Barrington is in 1793, when the town no longer needed its old courthouse, which stood in front of present Town Hall, and Captain Walter Pynchon moved it across the street to behind the Wheeler & Taylor office.

Friday, 21 Aug 2015 - Town police had brought in machine guns from Hartford and kept them in the Town Hall basement, just in case violence erupted. Ted Hitchcock said an FBI agent hid in his attic — his house was encircled by the U-shaped park — with binoculars trained on the proceedings.

Friday, 7 Aug 2015 - It is a fictional character created and drawn by a one-time Great Barrington resident who is most sought by comics collectors: Plastic Man, or Plas, as he's called by his sidekick, Woozy Winks.

Is it plagiarism? Fake homes of famous authors in the Berkshires

Monday, 13 Jul 2015 - There’s a recreation of the Little Red Cottage in Stockbridge where Nathaniel and Sophia Hawthorne lived for a couple of years on the north slope above Lake Mahkeenac, across from the present Tanglewood.

Monday, 25 May 2015 - Many of the very oldest stones in the cemetery are unreadable today. If you rub some of the lichens off, you can still make out Ephraim Porter’s stone, though. He was a militiaman who died in a later conflict, Shays’ Rebellion.

A fly on the wall. Really.

Friday, 1 May 2015 - Wasn’t entertainment so much simpler in 1925? Just scramble up the side of the building, and everyone in Great Barrington and their neighbors from Egremont, Sheffield and Monterey turn out to ooooh. (I know, they really had a little blood lust; they wanted to see if he’d fall.)

W.E.B. Du Bois: In his own words, at Mason Library celebration

Sunday, 1 Mar 2015 - We are very anxious to have you attend and take the role of principal speaker of the evening. We also hope to have a short talk by Judge Hinman and Dr. Charles H. Painter, both of whom I think you know. You will find many of your old friends in attendance, and we think we can assure you of a good time. -- Clarence Sweet, superintendent of the Monument Mills in Housatonic, in a letter to W.E.B. Du Bois in 1925, inviting him to speak before the Alumni Association of Searles School

Monday, 8 Sep 2014 - “The arrival of that first train is an event to be remembered; it had been expected in the afternoon of the preceding day, and hundreds of people had gathered in the street to witness it.” -- Historian Charles J. Taylor

Walk In the Footsteps of Du Bois July 12

Monday, 9 Jun 2014 - The public disdained using the new roadbed for several years. You can improve our roads, but you can’t make us use them, people declared silently. -- Reaction in 1812 to improvements in what would become Route 7

Wow, it's like paying taxes makes you able to do whatever you want. That, however, is not the case as there is actual law regarding quarantine and isolution

I keep going back and reading the original message trying to be offended by it, but it's just simple and direct language that echoes the pleas of state government leaders to limit ...