Aimée K. Michel is Associate Professor of Theater at Bard College at Simon's Rock. As a free lance director she has directed at Capital Repertory Theater, Berkshire Theater Festival, The Hangar Theater, Actors Theater of Louisville and Williamstown Theater Festival as well as serving as Artistic Director of the New Orleans Shakespeare Festival for more than 10 years. 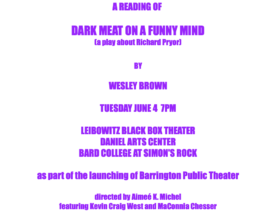 At Barrington Public Theatre ‘Dark Meat in a Funny Mind,’ Wesley Brown’s play about Richard Pryor, the King of Comedy

“I started listening to recordings of his old club routines in my car… I was laughing so hard I had to pull over. It occurred to me that I had to do something with this.” -- Wesley Brown, on