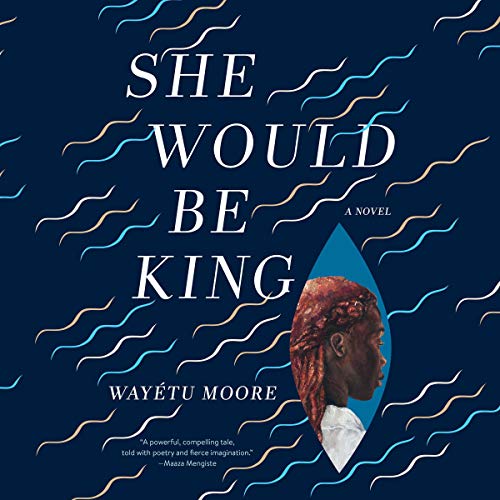 This week we travel to Africa and Saudi Arabia before traversing a jagged political landscape. Please remember that all titles are available in your local bookshop or library.

She Would Be King
Wayetu Moore; read by the author
Brilliance Audio, nine hours and 38 minutes, www.audible.com, $29.99

When Americans tackle magical realism, the result is often little better than “Herbie the Love Bug.” Moore, a Liberian-American, has happily changed that vista. Her ambitious novel relies on history, romance and magical realism to weave together the stories of three people caught up in the drama and warfare surrounding the founding of Liberia in the 1800s. Moore reads with an energy and clarity that enhances an already captivating story. She not only reels us in with her expressive dialogue and descriptive prose, but she is on equal footing with the most experienced audiobook narrators working today. Her African dialects are superb, and she manages a passable British accent. (This novel contains adult themes, though sparingly so.) Grade: A

In the Land of Invisible Women: A Female Doctor’s Journey in the Saudi Kingdom
Qanta A. Ahmed, MD; read by Nicola Barber
Brilliance Audio, 14 hours and 45 minutes, www.audible.com, $29.99

This is a few years old, having been published in 2012, but is more relevant than ever these days. Ahmed is a Muslim doctor who left the relative freedom of life in Great Britain and the United States to work in Saudi Arabia. While some time is spent discussing her profession, the bulk of this memoir is a fascinating account of life behind the veil, both socially and from a religious standpoint, offering insight into a culture of traditions and beliefs that are little known in the west. It does lack some focus, however, leaving us wanting to know more about some subjects, such as the Saudi reaction to 9/11. Barber, a British actress with a lovely voice, conjures up many accents, both regional and international. Grade: B-plus

This is a mixed bag. Manji has some powerful things to say about the disintegration of our national discourse surrounding politics. Unfortunately, she does so by talking to her dead dog. It is a cloyingly simplistic conceit that greatly distracts from her thesis. Even worse, Boorman, who has a high-pitched and rather grating voice, arrives as the dog to offer her view of life from doggie heaven. It’s too bad Manji took this route, because it interferes with a discourse that could do us all some good as tribalism and bigotry creep into the viewpoints of our increasingly partisan country. Manji is an adequate narrator, but the sound effects are nothing short of corny. Grade: C-plus