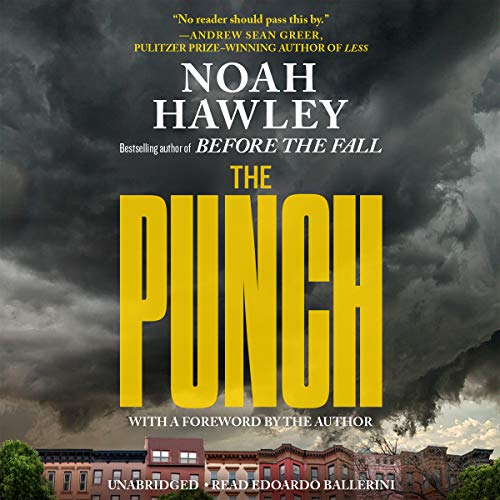 A humorous novel about a dysfunctional family starts us off this week, followed by a collection of scary stories and a sparse, dystopian novel set in England. Please remember that all titles, including downloads, are available at your local bookstore and library.

Darkly funny, a bit frenetic, offbeat and entertaining, this novel is about family dynamics, personal disappointments, familial intolerance, and grief. It is an odd story, but a weirdly entertaining one that stays with you, probably because it mirrors the messiness that so often surrounds family dynamics. The only flaw in his storytelling is that sometimes Hawley digresses, which disrupts the flow of the narrative. Ballerini has an Everyman quality that makes this all the more effective as he expresses the angst and anger and sorrow of a man whose life is spiraling out of control. The production contains a short but thoughtful foreword by the author. Grade: A-minus

Eh. Like any collection, this is a grab bag of a few really entertaining and compelling stories, a few duds, and most that fly through that middle territory of diverting us without being memorable. The stories arrange from a few never-before-published to some we have previously heard, and they cover all manner of subjects from zombies to World War III to manufactured turbulence. Narrators range from professional actors such as David Morse, Corey Stoll and Norbert Leo Butz to seasoned audiobook narrators to King, whose reading has improved immeasurably over the years. Especially interesting is “Nightmare at 20,000 Feet” by Richard Matheson. Most people will have seen the episode of “The Twilight Zone” starring William Shatner, but the original story is intriguingly different. Grade: B

Lanchester, the author of the sublime if weird “A Debt to Pleasure,” penned this futuristic, dystopian novel about the community guarding a border wall in what was once Great Britain. It is an odd novel, sparse and repetitive; guarding a border wall is dull, and so are some of the passages describing it. The ending improves somewhat and then just peters off. Frankly, one wants to know what happens to the protagonist once he reaches an interesting locale, but the novel just ends. Poulter reads dispassionately in a smooth, deep voice with a pleasant English lilt. He sounds as austere and grim as his surroundings, which works better than it sounds. Grade: B-minus