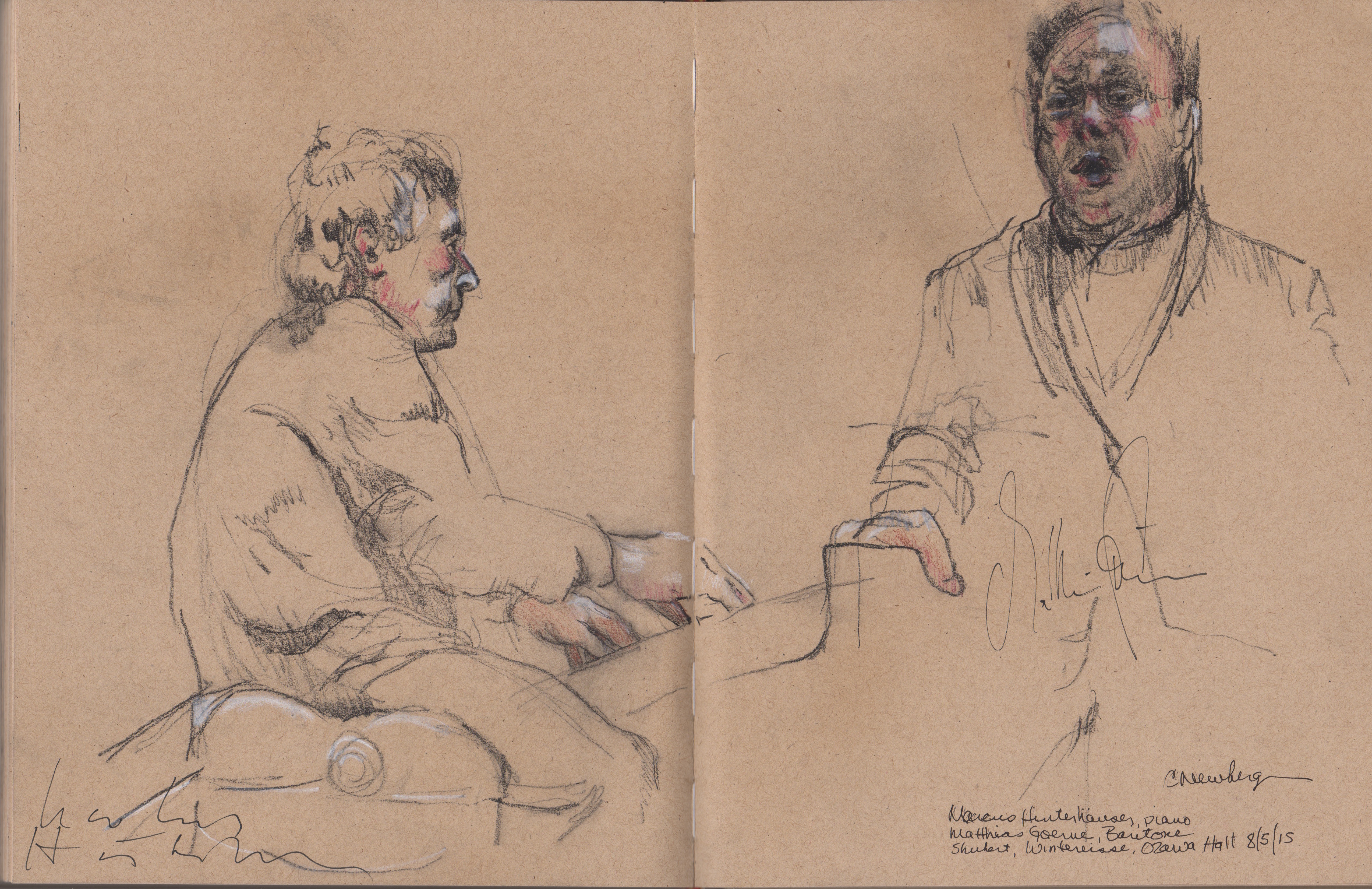 Lenox — Franz Schubert’s Winterreise (“Winter Journey”), D. 911, set to poems by Wilhelm Muller, can be understood as an ultimate expression of mournful gloom’ Schubert’s friend, Joseph von Spaun, is quoted in the Tanglewood program notes on Schubert’s performing them for him at the home of their friend, Franz von Schober, in Reflections and Notes on My Friendship with Franz Schubert: “We were utterly dumbfounded by the mournful, gloomy tone of these songs, and Schober said that only, ‘Der Lindenbaum,’ had appealed to him. Schubert replied, “I like these songs more than all the rest, and you will come to like them as well.”

This masterpiece of Viennese lieder was written as Schubert wasted away from a chronically debilitating illness. He died in the year that the song cycle was first published.

The 24 songs were sung with penetrating intelligence by bass-baritone, Matthais Goerne. They comprised the entire program on August 5 in Ozawa Hall. Sung seriatim, the cycle can indeed sound gloomy. Indeed, to a pediatrician impressed by the development, delights, and depredations of masculinity, the songs can also be understood in light of what’s known about the clinical manifestations of depression in men: An experience that provokes an obsessively negative view of the world; prolonged sadness that may be expressed in rage and isolation from others; an inability to acknowledge one’s and others’ feelings and reluctance to talk about them; and a seeking through sex to fill the hole in one’s heart and one’s “dependency needs” from caring others. (Promotional disclosure: several pertinent chapters from your reviewer’s book on male character development may be read here),

Many such men, in the words of the French poet, Anais Nin, inhabit “a world dry to tears and bleached of color.” Her humorous take on men’s emotional struggles in her 1950 autobiographical novel, “Four-Chambered Heart” is well worth the read:

How heavy this life, the life of men! Is it true they cannot raise one eyebrow without the other? So weighted with their work, eagerly curving their shoulders to the contours of the yoke. A world dry to tears and bleached of color. One never hears the wind chimes or the music of jewelry. In the mornings they brush away their dreams like flies. There is no carpet and no grass over the rough brown boards of their existence. Perhaps, never owning more than two pairs of shoes, the richness of life has escaped them.”

Poets, philosophers, and for that matter, composers, however, aren’t burdened by the static strictures, criteria, and catch phrases, of contemporary psychiatric diagnosis. Nin and the existentialist Spanish philosopher, Miguel de Unamuno, best known for his 1913 book, “The Tragic Sense of Life,” are both deeply perceptive on the tragedy of life itself, and its inextricable connection to the mysteries of attraction, attachment, and love.

Regarding the spiritual crises that engaged and affected both composer Schubert and poet Muller (and inevitably, ourselves), de Unamuno’s words carry striking relevance:

“There is no true love save in suffering, and in this world we have to choose either love, which is suffering, or happiness. Man is the more man, that is, the more divine, the greater his capacity for suffering, or rather, for anguish.

“For it is the suffering flesh, it is suffering, it is death, that lovers perpetuate upon the earth. Love is at once the brother, son, and father of death, which is its sister, mother, and daughter. And thus it is that in the depth of love there is a depth of eternal despair, out of which spring hope and consolation.”

Matthias Goerne and his knowing collaborator, pianist Markus Hinterhauser gave special emphasis to the melodic and harmonic richness of Schubert’s music and the allusive highlights of Muller’s poetry. They left this listener and audience with a sense of sadness, yes, but also of the glowing beauty of the many shades of life and love.

Beginning with a series of carefully articulated chords in warm C-minor, Hinterhauser set a reflective tone for the opening song, “Good Night,” where the self-described “stranger” arrives and departs in the month of May:

“A stranger I arrived,

A stranger I depart.

With many a flower garland.

The girl spoke of love,

Her mother even of marriage —

Now the world is so desolate,

The path veiled by snow.”

In the verses that followed, metaphors of extreme cold and unbearable heat gave voice to surging emotions and exquisite yearnings. The last verse of “Good Night,” sung to the same melody as the first, commingled both C-major and –minor chords before its final resolution in the minor tonality. Goerne sang it sweetly and caringly, suggesting mature concern for a loved one who might not share his affections:

“I will not disturb your dreaming,

It would be a shame to spoil your rest,

You shall not hear my footsteps;

As I pass by, I write

“Good night” on your gate

That I thought of you.”

Goerne’s tender singing is beautifully nuanced. His use of dynamics to subtly accentuate the text focuses special attention on evocative words and syllables.

His use of the advanced vocal technique called messa di voce, (“placing of voice”), was evident from the beginning. This distinguishing feature of Goerne’s mastery involves alighting quietly on a particular pitch, subtly increasing its volume, and becoming quiet again. His intonation, in every register, was infallible. Many of those pitches were very high, and they were indeed begun very softly.

As well, both Goerne and Hinterhauser were able to convey the rainbow of emotions suggested in the poems, as illuminated in Schubert’s powerful harmonic sensibility through the vehicles of melody, counterpoint, and chords.

These included feelings that were name-able and many that were not: sorrow, joy, shame, elation, embarrassment, rage, humor, hiding, seeking, freezing, sweating, and perhaps above all, yearning. This concert addressed not only the complexities of unrequited love and the prospect of emotional life beyond it. It spoke to the mystery and tragedy of life itself.

Highlights of the evening drew together Schubert’s gorgeous musical settings and the expressive virtuosity of each performer:

“He should have noticed sooner

Then he would never have sought

A faithful woman within the house”

both singer and pianist shifted to a more legato flow. In lowered volume, Goerne uttered the thoughtful sentence,

“Inside the wind is playing with hearts,

As on the roof, but not so loudly,”

which summoned the sense of lovers sheltered with in a storm. But then, an emotional lightening bolt struck suddenly! In a tumultuous, and angry crescendo, Goerne sung a fierce and accusatory thought about the callousness of the parents of the woman who now belonged to another:

“Why should they care about my grief?

Their child is a rich bride.”

Have I not noticed

That I have been weeping?”

In its final stanza, powerful symbols of heat and cold chart the excursions, depths, and mystery of his thwarted passion:

“And yet you well up so scalding hot

From your source in my heart,

As if you would melt,

All the winter’s ice.”

The third line was sung with affecting, diminishing, volume. But as Goerne and Hinterhauser turned up the volume massively in their buildup to the last word, “ice,” the mystery was unveiled. Was this the melting power of love? The searing power of love not returned? A man’s profound fear of fully experiencing his most powerful feelings? (And acting them out instead?) The existential threat, from infancy, of being abandoned, and the rage toward whomever is doing the abandoning?

“By the well, before the gate,

There stands a linden tree,

In its shade I dreamt

Many a sweet dream

I carved in its bark

Many a word of love;

In joy and sorrow,

I was ever drawn to it.”

The linden’s balm of solace was evident even in the dark of night, when he walked sadly by it, in two verses sung to the same melody in the minor key, becoming quieter and quieter, down to a pianissimo near-whisper, in which Goerne leaned down, confidingly:

“Today too I had to walk

Past it by dead of night;

Even in the darkness,

I closed my eyes.

And its branches rustled,

As if they were calling to me:

‘Come to me, companion,

here you will find rest.”

The word rest, however, was sung over an F major, not minor, chord, signaling, perhaps, optimism just prior to an agitated phrase as protagonist moved on courageously.

“The cold wind below

Straight into my face;

My hat flew from my head;

I did not turn back.”

In the final stanza, sung at a slighter brighter tempo along with richer and more varied dynamics, the linden’s enduring meaning as a symbol of comfort was given voice, finally echoed by Hinterhauser’s prayerful recapitulation, culminating in a quiet, major cadence.

Hinterhauser’s musical mastery is noted in the New York Times today in an article on the Salzburg Festival’s pinning its hopes on him: A Festival Expresses Its Bounty in Music and Drama.

“This is a time of artistic transition for the festival. Helga Rabl-Stadler, its president since 1995, has had trouble keeping her last two artistic directors on the job. The appointments are for five years. Jürgen Flimm left the post in 2010 a year before his contract ended to take charge of the Berlin State Opera. Alexander Pereira, who arrived in 2012 with big ambitions, left after last summer’s session two years early following protracted disputes over budgets and artistic priorities. He argued that the festival should present mostly new opera productions, including regular commissions. The board pushed back, citing the expenses involved.

In the fall of 2016, the Austrian pianist Markus Hinterhäuser begins a five-year term. In an interview in her office, Ms. Rabl-Stadler expressed confidence in his vision and predicted he would serve two terms. As a pianist he won admirers last year at Alice Tully Hall for his exquisite playing in the baritone Matthias Goerne’s performance of Schubert’s “Winterreise,” a staged version of the cycle directed by William Kentridge.”

Note this stunning performance, in the video below, played before Kentridge’s striking imagery, of the final poem in the cycle, “The Hurdy-Gurdy Player.” This brings forward both artists’ virtuosity in interpreting what appears superficially to be a simple melody, sung over a repetitive, mechanical accompaniment.

This verse is still more tragically metaphorical. Sung with many nuances, it develops very, very softly, rising only to mezzo forte at its the final question.

“There beyond the village

He plays as best he can.

Barefoot on the ice,

He totters to and fro,

And his little plate,

No one wants to listen,

No one looks at him,

And the dogs growl,

Around the old man.

And he lets it all go on

He plays, and his hurdy-gurdy

Shall I go with you?

Will you turn your hurdy-gurdy

These words cry pain, hunger, and hopelessness. The observer appears to be asking, “Where is the meaning in life?” And to this listener, answering, however obliquely, in giving love, respecting the frailest human connections, and in giving back. Surely, Schubert has done this in leaving us this marvelous and profound song cycle.

After a long silence, it appeared as if the Tanglewood audience, too, acknowledged Schubert’s generosity in the face of life’s travail, so finely actualized by these two masters of his lieder.