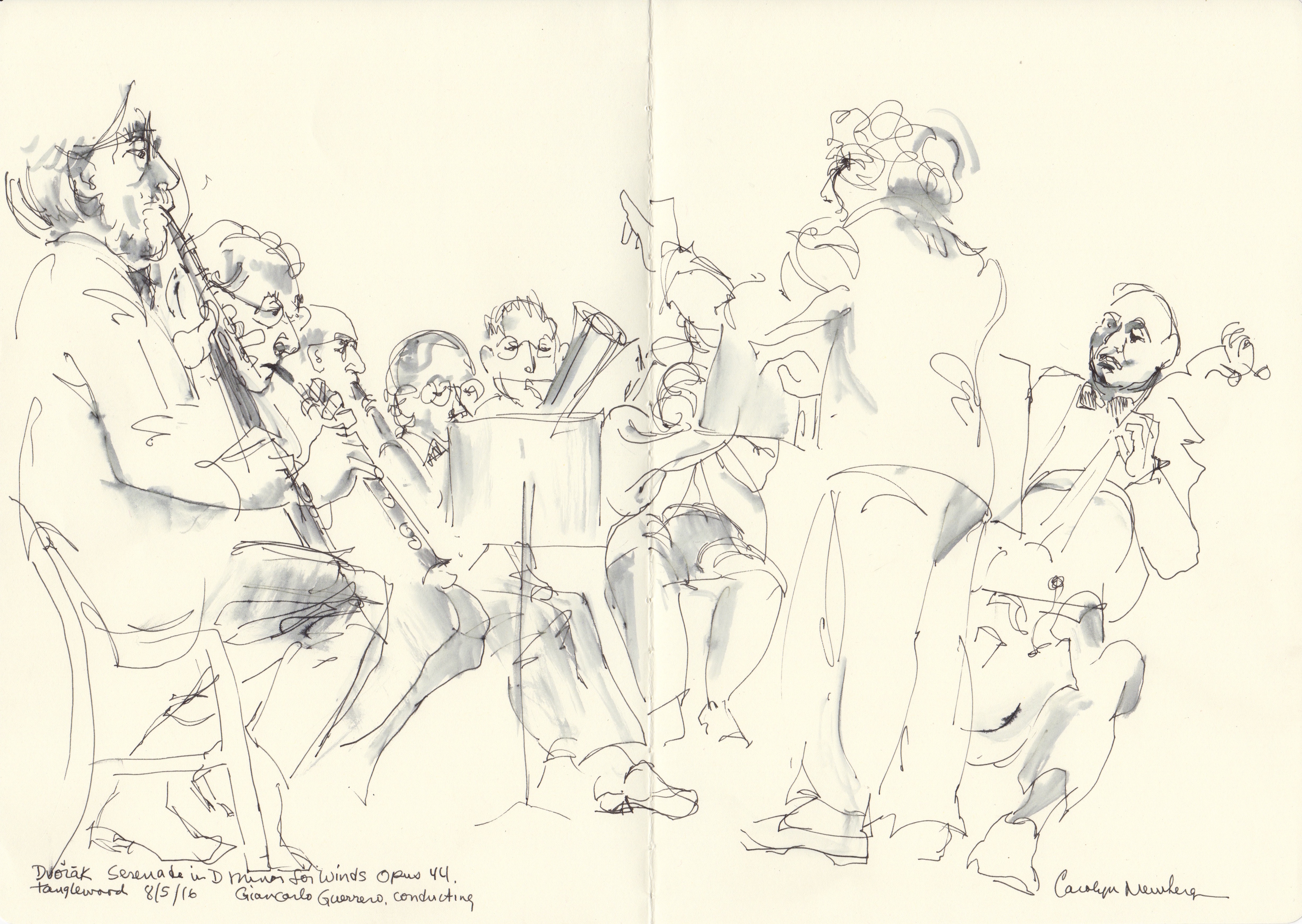 Lenox — Three summery outdoors pieces by Dvořák, Mahler, and Brahms offset beautifully a virtuoso extravaganza by the pianist Yefim Bronfman in the Tanglewood Shed on August 5, 2016. The Boston Symphony Orchestra, conducted by Giancarlo Guerrero, really dug in in support of his masterful, nuanced performance.

It was the main event that made the concert most memorable, although the lighter works offered charm and a welcome extra exposure to the orchestra’s superlative strings and woodwinds. Guerrero appeared to rely on the individual players’ readings of the scores, and his seeming inattention to many dynamics, accents, and opportunities to vary the tempos somewhat flattened the musical experience. He was a capable timekeeper, and we enjoyed some stunning solo- and section-work.

At the outset of the concert, Principal French horn, James Sommerville stepped forward and offered several useful insights into what pulled the concert’s outer edges together. (In addition to being a renowned master of his instrument and a popular conductor, Somerville is an engaging public speaker with a wry sense of humor.)

He noted that the composers (other than Liszt) took long working vacations in the woods and mountains, beginning their days with rambles, and only after late breakfasts took to their studios to write until the evening. “Thus,” Sommerville described, “the natural world is the source of this music.” As well, he noted, colloquially, “You get a chance to see the woodwinds and strings up close and personal. Usually, from the expensive seats over here (gesturing), you see lots and lots of violins . . . They play more notes in a single concert than the tuba player in an entire season!” (Fans of the Orchestra’s principal tuba, Mike Roylance, were this question to be posed, would surely reply: “But what fabulous notes come out of that horn of his!”)

Antonín Dvořák’s Serenade for Winds, Cello and Double Bass (1878) evokes the 18th century, late-baroque, tradition of outdoor performances on the grounds of the nobility’s castles for the amusement of both the aristocracy and its serfs. Its march-like beginning signals various themes of a happily balanced social order, with lots of question-and-answer short phrases that shift from D minor to F major.

The Allegro molto Finale took the form of a vivid Slavonic Dance, reminiscent of Dvořák’s popular suite of the same name, which he composed shortly after this Serenade. He used the startling tritone, the interval all but forbidden in the counterpoint of the 18th century, to emphasize this lively beat, which resolved upward to the dominant tone. (Imagine, or play, the interval D and G sharp, followed by D and A, and you’ll get the drift.) Where previously, the clarinets distinguished themselves in sensitively coordinated, bristling upward and downward thirds, with the oboes piercing the ceilings and exploring the depths in runs and accents, everyone pitched in in a riot of exuberance at the end.

With a quiet, stately progression of chords (B flat, G flat, C7, F7, G minor) the second Liszt piano concerto lays down a harmonic sequence that returns as a familiar trope through the piece. This, and the astute use of woodwinds to predict and echo the melodies that are played by the soloist, produces in the hands of a master a running conversation and a sense of structural coherence.

After Yefim Bronfman sounded the first, nuanced melodic fragment in his left hand and embellished it delicately in his right, the oboe picked it up before tossing it to the clarinets and bassoons, even as Bronfman rose to the high register with a series of virtuosic decorations.

Then, suddenly, there was drama, which drew on Bronfman’s signature power, a battery of repeated left hand figures that morphed into martial chords, which in turn were magnified by rhythmic pickups in his right hand. All was in control, although conductor Guerrero seemed unaware of the massive increase in the orchestra’s volume.

But as Bronfman arched across the keyboard, covering the entire piano range, it seemed hardly to matter. Blazing octaves, startling dynamic shifts, and smoldering pianissimos sustained interest on the piano. This was playing from the Lizstian wheelhouse, and the soloist was in total command. This man and this music were made for one another.

“Where had such authoritative performance and leadership been heard before?” your reviewer wondered. Recalling a magnificent performance by Rudolph Serkin of the Beethoven 5th Emperor Concerto with the Philadelphia Orchestra under the baton of Eugene Ormandy, and checking Bronfman’s own website, it came as no surprise that among his teachers at the Curtis Institute was Serkin himself, along with Rudolph Firkusny, and Leon Fleisher (the artistic director of the Tanglewood Music Center from 1984 to 1997).

But it was in the near-silence of the softer sections of the piece, and especially in an extended duet with cellist Martha Babcock, that Bronfman’s equally convincing tender side emerged. Here, the audience sat in rapt absorption of Babcock’s nuanced phrasing and the elegant string of pearls that emerged from Bronfman’s piano. These will surely count among the season’s most emotionally affecting passages.

Subsequently in the powerhouse department, Bronfman gave his all, but never banged on his instrument. He offset a repeated, accented orchestral rhythm of 1, 2, 3, 4, 5, SIX! after this duet by sounding a series of enormous block chords across the keyboard, followed by wild up-and-down glissandos. Then, a Turkish march crossed the stage with the now-familiar “B flat, G flat, C7 F” harmonic underpinning, followed by a cadenza that was both quiet and rhythmic. Every impulse was meaningful and moving, and the lovely, distinctive voice of principal flute, Elizabeth Rowe, preceded the return of Martha Babcock in yet another moving duet.

Toward the end of the last movement, after another cadenza of increasing intensity, Bronfman, backed by the entire orchestra, whizzed single notes, ripped glissandos, and dazzled the crowd with faultless fortissimo octaves that extended to the very top and to the bottom of the keyboard. A sudden reprise of the Turkish march and a glimpse of the B flat, G flat, etc. harmonic armature brought the work to a close. To say the least, it hung together splendidly, inspired most by its Titanic soloist.

Surely you will enjoy, gentle reader, this four-minute taste of Bronfman’s pianism in this video clip of his performance of this Liszt concerto at last month’s Bravo! Vail Music Festival.

After the intermission, an unusual arrangement of a Gustav Mahler work was offered. To say the least, the composer was no slouch when it came to orchestration, and his sound was nothing if not distinctive. But as a conscientious objector to World War II, Benjamin Britten took on the task of addressing Mahler’s Minuet from the Third Symphony. He succeeded in producing a most interesting concerto for orchestra. Eloquent solos by English horn principal, Robert Sheena, (as “Pan awakens” in Mahler’s programmatic story), associate concert master, Alexander Velinova, principal French horn, James Sommerville, and principal trumpet, Thomas Rolfs, were especially praiseworthy. Britten adorned Mahler’s familiar work not only with solos, but also with unexpected sound effects, from the soft snare drum, to the harp counterpoised with string pizzicatos, and to lush orchestral textures that evoked a mossy rain-soaked forest.

With the flutes positioned in the concertmaster’s desk, and the piccolo seated just behind them, and clarinets and oboes continuing the flute rank, one could really enjoy seeing the woodwinds as well as listening to them in the Brahms Serenade that concluded the concert. They played magnificently. The violins in Brahms’s composition were absent.

Woodsy sounds often emerge from Elizabeth Rowe and Clint Foreman’s flutes, from Cynthia Meyers’s piccolo, and from Richard Svoboda and Suzanne Nelson’s bassoons, but in this performance, they cast a leafy aura with odd bursts of sunlight that illuminated the deciduous forest.  Both at the beginning and in the lively buildup to its sudden ending, Richard Sebring’s French horn gave a lucid and penetrating light of its own to this sweet Serenade.