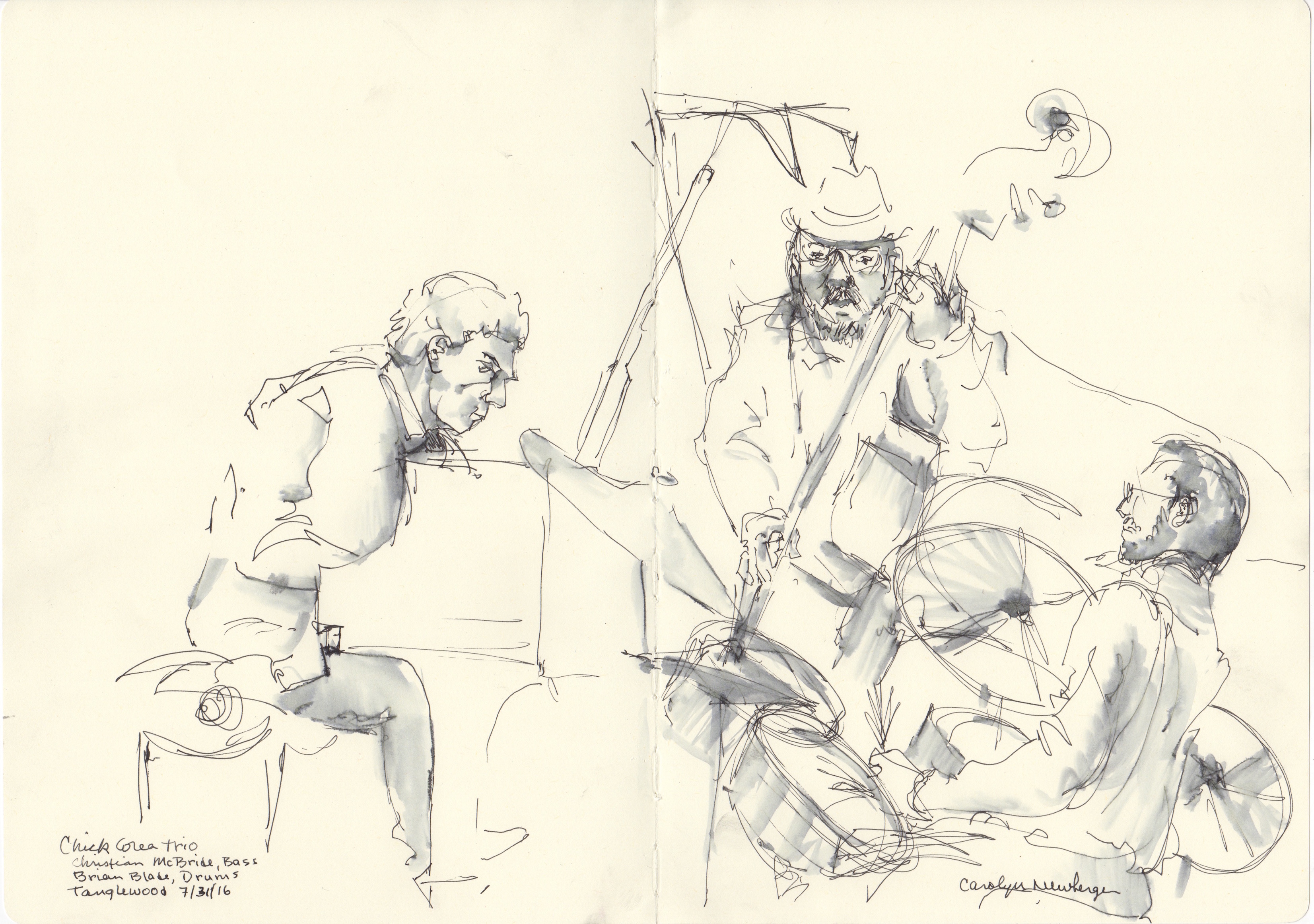 Lenox — Not just at the beginning but at the end of the last concert of his trio’s four-year, worldwide tour, the renowned jazz pianist, Chick Corea, brought in the audience at Ozawa Hall on August 1. When he asked us to sing, the sense of delight was palpable.

First, after noting that his guys (stand-up bassist, Christian McBride, and drummer, Brian Blade, virtuosos both) were already prepared to perform, he played the standard A 440 tuning note on the piano and asked the crowd to sing it. Then, without missing a beat, he sang a simple, 2-note interval and motioned, “come on!” The response from the audience was close to perfect, but after a few more intervals and three-note phrases, the solfege assignment got a lot harder. Soon, the fulsome chorus was picking up higher, more difficult intervals, complex four-note loops, and swirling phrases with trills!

This audience scatting wasn’t half bad, if not up to Clark Terry’s or Bobby McFerrin’s, good enough from the musical point of view for concert-opening purposes. Indeed, it served to provide the straightforward armature for the trio’s first improvisation, on a simple melodic and harmonic 4/4 frame.

Who knew such a “Tanglewood Choir,” as Corea put it at the end of the concert, even existed? (Note to next year’s Contemporary Music Festival planners: consider this composer and his unique creative propensities.) Corea’s major debut on the classical music stage was a performance of his first Concerto for Piano with the London Philharmonic Orchestra in 1999. His String Quartet, No. 1, was written for, and performed by the Orion String Quartet in 2004, and he participates in contemporary music festivals around the world.

One of the pioneers of a movement begun by the late composer and TMC director, Gunther Schuller, who called it “Third Stream,” and as President of New England Conservatory created a department to advance it, Corea’s 2006 “fusion” recording, Ultimate Adventure, won the following year’s Grammy Award for Best Jazz Instrumental Album.

Each set of the concert consisted of spellbinding trio and individual improvisations, which displayed not only delicious two- and three-way instrumental conversations but also foot-tapping swing. Some of precise endings made one’s jaw drop; so ineffable was their telepathy.

Flights of solo brilliance were equally startling: Corea himself paid tribute to pianist Bill Evans, performing Alice in Wonderland (“not his composition, but he owned it!”) with bursts of unison right-and-left-hand octaves and a gallop of 6/8 rhythm with accents on beats 2, 4, and 6. Dusk in Sandi, a tip of hat to its composer, bebop pioneer Bud Powell, featured expressive scratches of Corea’s fingernails and fists on the piano strings while he held the loud pedal down. You could hear in the overtone series echoes of Thelonius Monk harmonic oeuvre (the two pianists were friends), to which Corea added Monk-inspired sweeping downward runs. A convincing rendition of the beginning of the Scarlatti Sonata in E major devolved into concise, plausible, jazzy wisps of classical improvisation and an improvising platform of changes reminiscent of pianist Duke Jordan’s Jor-Du.

Through and through, drummer Brian Blade listened keenly, somehow knowing exactly where to give emphasis to an idea, to pick up syncopation, and to invent a new rhythmic underpinning. Both the Miles Davis favorites, On Green Dolphin Street, and All Blues, brought out Blade’s subtle tuning in to Corea’s changing rubato and laying down a jumping sequence of “fat fours,” as the the argot of the day characterizes the West Africa-inspired anticipations of the first beat of the measure in New-Orleans street-bands and revival ensembles.

Toward the end of “All Blues, Blade executed an elegant mysterious trick with his brushes. He pushed them forward on his snare drumhead in anticipation of every measure’s downbeat.

In so doing, he subtly magnified the underlying New Orleans shuffle. The resulting, swinging, sandpaper slither pressed into the trio’s palette of propulsions.

In the 1920’s, a new dance craze built on Blade’s innovation might well have challenged the fancy footwork associated with James P. Johnson’s “The Charleston” and precisely to the point, Louis Armstrong’s “Don’t Forget to Mess Around When You’re Doing the Charleston.” It’s not hard to imagine “Sandpaper Slither.” (Note to Brian Blade: We hereby donate the naming rights to you.)

Blade’s work and the extraordinary vision of bassist Christian McBride, may be witnessed in the video below of your reviewers’ selection as the musical highlight of the evening, Fingerprints, that Corea described as the answer to Wayne Shorter’s composition, Footprints.

If you’ve never heard a contrabass sounding like a guitar, smearing like a trombone, reaching for high harmonics at the top of the piano range, both near the bridge and at the top of the fingerboard, that’s what we heard in Ozawa Hall. This video below of Fingerprints features as well some fabulous single-note and improvising by Corea, and an inspired solo by Blade. Remember, please, that this resembles the concert under review only in outline and elements of harmonic structure. This is a music that the performers make up, on the spot, in real time.

Once again, at the end of the evening, Chick Corea charmed the audience on his encore, another sing-along, equal in delight to the first. In an additional bonus, Christian McBride reciprocated Corea’s earlier Scarlatti quotation with his own variations on Joaquin Rodrigo’s Concierto de Aranjuez. He bowed them, simultaneously keying the harmony with delicate pizzicati.

Several trio hugs and selfies with the Ozawa Hall crowd in the background celebrated the finale of the trio’s long tour. What a privilege it was to share this loving collaboration, which brought to close a notable phrase in the arc of musical history!