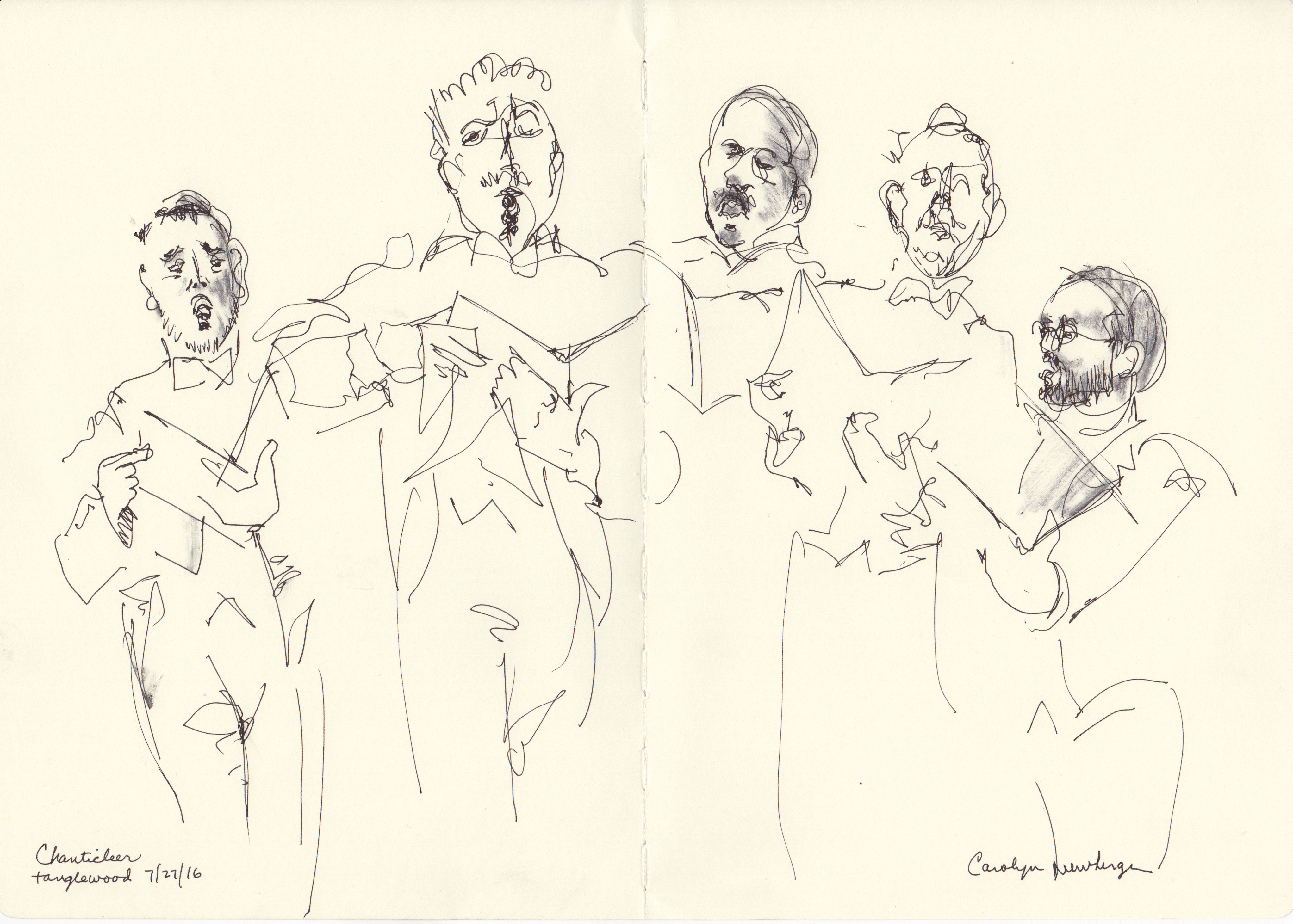 Lenox — “Over the Moon” was the theme of a luminous and enlightening performance by the all-male a cappella ensemble, Chanticleer, at Tanglewood on July 27. Just as the songs reflected the group’s aesthetic objectives and its members’ exalted life experiences, the designated announcer noted that they intended the concert to expand our “worldly and extraterrestrial perceptions. We’ll see you on the other side! “

And did they ever!

Each member of this group is a masterful vocalist, equipped both to sing across his range in precise intonation, and to comport with the sustained, indeed astounding, collaboration across the ensemble to create seamless dynamic nuances, and textured attention to texts ranging from Maori traditional song to 15th century madrigal to 21st century polyphony. To meet the challenges of culture, style, contrapuntal and harmonic sensibility, and especially, to sound explicit and intended dissonances, requires not only fine training but also dedicated rehearsal. If these attributes are rare in instrumental performance, they just don’t exist in the cultural paradigm for male ensemble singing, the Whiffenpoofs and their counterparts across the collegiate landscape. (We say this as long-term admirers, from the table down at Mory’s, which now admits women.)

The arrangements feature excursions across the inner and outer dimensions of the SATB (soprano, alto, tenor, bass) range. And many come across as otherworldly, in the reaches to the very top of the soprano range and beneath the bottom of the bass range.

Cortez Mitchell’s sweet, supple, penetrating tessitura graced both a Monteverdi masterpiece in the first set, ringing without vibrato solo lines that wove courageously through intersecting melodic fragments and exposed narrations, and the astounding Liebst du um Schonheit by Gustav Mahler that preceded the intermission. Here, the task was not only to give voice to the deeply felt text (“If you love for beauty [its title], Oh, do not love me! . . If you love for love, Oh yes, love me!”), but to manage the extravagant, transcendent reharmonizing of arranger and former Chanticleer director, Joseph Jennings. He doesn’t take lightly the modernization of Mahler, and he, and the chorus, succeeded brilliantly.

Liebst was followed by another song from Mahler’s Rückert-Lieder, often referred to as his very best, Ich bin der Welt abhanden gekommen (“I am Lost to the World”) Appropriately to the audience’s recognition of the melody and harmony from the Adagietto movement of Mahler’s Fifth Symphony (not exactly a quote, but instantly recognizable) the arrangement, by Clutus Gottwald, was straightforward and consistent. You could hear a pin drop as the first portion of the concert drew to a close with the moon-struck words “I live alone in my heaven, in my loving, in my song.”

There is Sweet Music by Edward Elgar (Opus 53, No. 1) was a splendid contrast to those who see the English composer through a lens refracted by his Pomp and Circumstance and Enigma Variations. This was harmonically more daring and contrapuntally fine-grained, with interstitial canons, and gave musical substance to text like “of shadowy granite,” “cool mosses deep,” and “from the craggy ledge the poppy hangs in sleep.” No small challenge, you’ll agree.

Elgar’s way of doing so was to interpose and overlay diatonic chords, as Paul Hindemith did so resoundingly in his Symphonic Metamorphosis of Themes by Carl Maria von Weber, and more colorfully by Richard Strauss in the Presentation of the Rose scene in Der Rosenkavalier. The final cadence, for example, simultaneously presented C minor over G major, and A flat major over G major, before resolving gorgeously to G.

This was fine, modernistic stuff from the man who said that he came to hate Pomp and Circumstance. Dare I say that no few of us share Elgar’s sentiment, having recently been subjected to its repeated, out-of-tune, jejune, June expostulations while each and every college graduate was serenaded as a baccalaureate by what passed as a wind ensemble on today’s campus?

What pleasure and delight to hear yet another breath of fresh air from Chanticleer!

The resplendent, confident voice of bass-baritone, Eric Alatorre, shone from the depths in the low, low (some would say unbelievable) B flat in the Mahler and in a powerful low D flat in Jaakko Mäntyjärvi’s The tide rises, the tide falls. The latter sounding gave special, now-familiar meaning to the composer’s repeated D flat pedal-point through the piece, both high and low, which served to give permission and accessibility to his exotic harmonies, adorning such text as “The traveller hastens toward the town, And the tide rises, the tide falls, Darkness settles on roofs and walls, But the Sea, the sea in darkness calls.”

Alatorre also featured mightily in a movement, Illusions, from a longer work, The Lotus Lovers, which was commissioned by Chanticleer from the late and lamented contemporary composer, Stephen Paulus. Here, in a striking compositional device in which he used repeated words (“endless,” “never,” “call for you,” “my heart,” “the night,” “I long,” to summon deep feelings, this marvelous bass sang elegant, resonant octaves from low D down to low, low D, on the words, “never, never.” This technical tour de force brought the suite to a dramatic close, “Only the echo answers, to mock me in the night, And the sleep I long for never, never comes.”

Three Moon Songs: Harlequin, Moon Drunk, and The Alphabet, by the contemporary composer, Nico Muhly, followed the announcer’s command that the audience must “Step into the lunar module right now!”

One small step later, the first verses of Harlequin conjured a remarkable image:

And rumples her great cape.

To quiet her quick temper

He makes a sequin shine.

Richly voiced, chromatic chords backed the rising, arching melody of the last phrase. But ancient, early-music harmonies resonated back to earlier in the concert beneath the following verse:

Brings Columbine to the roguish knave.

A silhouette against the turquoise sky,

He sings out gleefully,

The “silhouette” phrase was graced with a musical metaphor of crossing melodic lines, and the “Gleaming” in the ending was voiced with sublime, ethereal, delicious sparseness.

Stepping out of the lunar module to a giant step for mankind,
the discovery of the alphabet, and with it, words, the astonishing soprano, Kory Reid, uttered perfectly a continuous string of nonsense syllables in single notes even as the chorus ascended and descended with actual sentences and concepts which brought the cycle to its close:

Dreams of Harlequin from Bergamo,

Tracing of a body arc-in-cielle (a rainbow)

The eloquent alto, Adam Ward, surveyed the words beyond the letters with relish, aplomb, and exquisite countertenor.

Bass-baritone, Marques Jerrell Ruff, offered a chantey of oceanic metaphors in the Moondrunk movement of Three Moon Songs. With swells in volume and intensity, he summoned our fears and wants in love, as well as its many moonstruck mysteries:

Swim in swarms in the falling philter,

The wine we drink with our eyes,

Flows from the Moon in green ways.

Ruff’s performance of the spiritual, There is a Balm in Gilead, just made one weep in its beauty, and a sense that its feeling descended not only from personal experience, but a knowing comprehension of generations of African-American struggle, aspiration for freedom, and sense of triumph in Gospel and musical performance. Words cannot quite capture the beauty of his melismas and the subtlety of his profound expression.

Fortunately, there’s a video of his performance of this beloved hymn with Chanticleer, taken earlier this year (See below).

To say the least, the Ozawa Hall audience, justly enthralled, did not want to let Chanticleer go. They responded to the ovation with a gem, L’Amour de Moy, sung in traditional French. Here it is, recorded in 2014 at the Marinsky Theater in St. Petersburg. It was a perfect, reflective conclusion to a sublime evening of song.