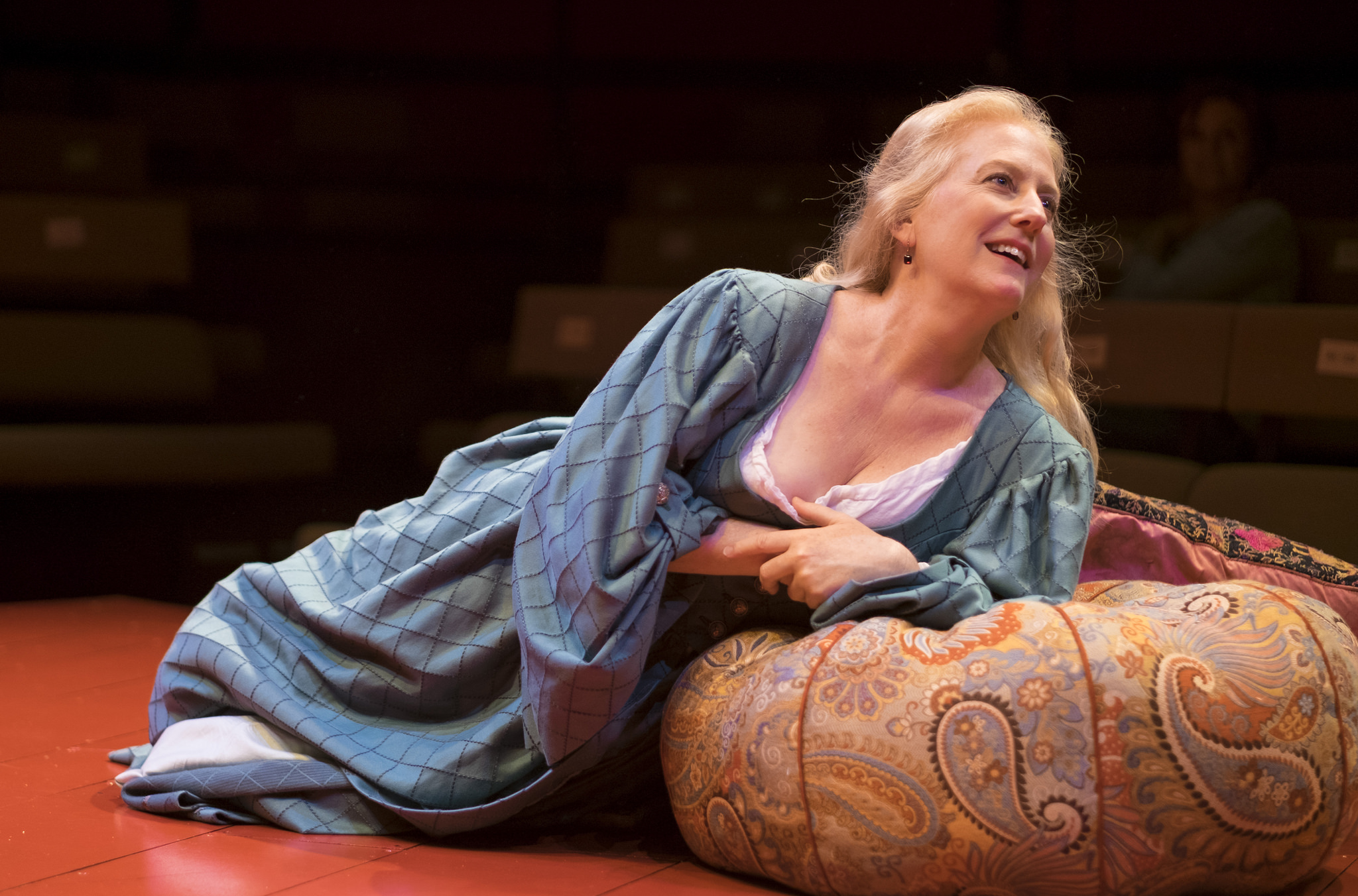 Lenox — Once upon a time, there was an ambitious, hard-working woman named Aphra Behn —- or Aphra Johnson, or Cooper, or Amis, or…? She worked as a spy for Charles II in Antwerp or Surinam — or maybe not. She was a widow — or perhaps she never actually married the Dutchman, Johan Behn — who was possibly from Hamburg and might have died of plague, or in a fire. It was the 1600’s and between population-decimating plague and the Great Fire of London, many records were lost. And Aphra herself seems to have discouraged having her biography pinned down.

But we do know from her many plays, novels and poems that she was a monarchist, a feminist and sexually liberal. During her childhood and young womanhood, the Puritans had closed the theatres as part of their general repression (All of which made her fear the tyranny of popular rule.), but considering the dismal lack of opportunity available to women in her time, Aphra made a stubborn, and possibly wrong-headed decision: “I’ll be a playwright…. I’ll earn my own bread or go hungry.” As if that strategy worked for many men.

Because Aphra became the first female English playwright to publish plays in her own name, because after at least a hundred years of neglect, various literary and critical luminaries (exemplified by Virginia Woolf in A Room of One’s Own) in the Twentieth Century praised her work, we can call her career decision a success. Because what we know and don’t know about Aphra is intriguing, playwright Liz Duffy Adams used her imagination to write “Or,” a raucous send-up of a Restoration Comedy, fictionalizing the beginning of Aphra’s adventures as a writer. Because the play is brilliant fun and full of enduring ideas, the director Alice Reagan advocated for bringing it to Shakespeare & Company. This led to the current production of “Or,” at the Tina Packer Playhouse.

In an interview the day of its opening, Reagan told me, “We want the audience to feel very close to these people. They’re living bold lives in terrible times.” Indeed they are! And “Or,” honors all of that. Tod Randolph begins her tour de force as Aphra in debtor’s prison, surrounded on all sides by bars that come down from the ceiling. Allyn Burrows as a masked, totally dashing Charles II pays her a salacious visit. How often does one find such an utterly delicious prisoner, wielding a pen and demanding more ink of her cockney jailer — also played by Burrows? One may partially account for Burrows’ ability to play three completely different characters, and flawlessly pull off the impressive physical comedy of each rapid costume change, and disappearances and re-appearances seemingly all over the theatre to his training with the Jacques Lecoq school of movement and performance language in Paris, but the authenticity of his emotional fireworks with Randolf and his completely believable and terrifying transformation before our eyes from a dissembling, scruffy, drunken spy into a physical and psychological menace are pure acting ability.

When Randolph spoke to me about the play at the interview, she emphasized being ensorcelled by this Aphra — brave and sensual, determined to write no matter what goes on in the outside world, or who among her lovers and friends interrupt and make over-the-top demands. That night, I was ensorcelled by Randolf as Aphra, making me believe every subtle emotion, each wild turn of the plot. As Alice Reagan had said at the interview, “We’re not sure any of it did happen, but there’s no reason to think that any of it didn’t happen.” The play is fast paced; the jokes come at us from all directions. Through the indiscriminate kisses, the supposed Catholic plot, the off-stage murder, the wonderful portrayal of three different and completely differentiated female characters (actress Nell Gwynne, Maria the servant, and Lady Davenant, the owner/manager of The Duke’s Company) by Nehassaiu deGannes, Randolph, Burrows and deGannes had the audience by the heart. They shook it with belly laughs, appalled it with Aphra’s vulnerability, frightened it with Burrows’ other character, the spy William Scot’s violence, and gave it the gift of a totally satisfying ending.

The demands of performing in the round seem to have brought “Or,” to a heightened level. I was impressed by the smart, allusive set, the subtle, almost subconscious lighting. The lighting designer, Jeanette Oi-Suk Yew had been at the interview and explained the technological magic which allowed her to suggest how seductive Aphra’s desk and writing implements are for her, but I won’t spoil it by passing that on. I’ll simply say audiences should pay close attention: They are in for a treat. And Govane Lobauer’s costumes are so beautiful, so evocative and ingenious as to take your breath away. Liz Duffy Adams raised the stakes for the performers by attending opening night. She said she was “very happy with the performance.” Judging by the extended applause and the excited comments of other attendees as they filed out, she wasn’t alone.

What did it take to make this theatre experience? Aphra was born in 1640, so it has taken nearly 400 years of history, social changes, the individual educations and personal development of everyone involved — from the writer and director to the actors and technical artists who contributed their talents. It took will power and coincidence, choices and dreams. So much study, so many musings, so much isolation to think, so many hours of labor intensive cooperation went into this night, and eventually into this completed run of collaborative art this September.

It also required the preparation and receptivity of each member of this particular audience. It came off to the best of everyone’s ability. And then it was gone — to be replaced by the next performance, and the next — until closing — each one individual yet absolutely connected to the others. The aggregate of shows will tell us many things about this Aphra Behn, Liz Duffy Adams’ Aphra Behn, Alice Reagan’s Aphra Behn, Tod Randolph’s Aphra Behn, but the real Aphra Behn will not be “captured”; she will still not be known. By continuing to spring from her long ago, semi-mysterious life, she will have inspired additional people, and helped to make yet another artistic work 376 years after her birth, and all may arc forward into other works as yet unimagined. Not bad for a barber’s daughter born in Sturry or Canterbury — maybe.