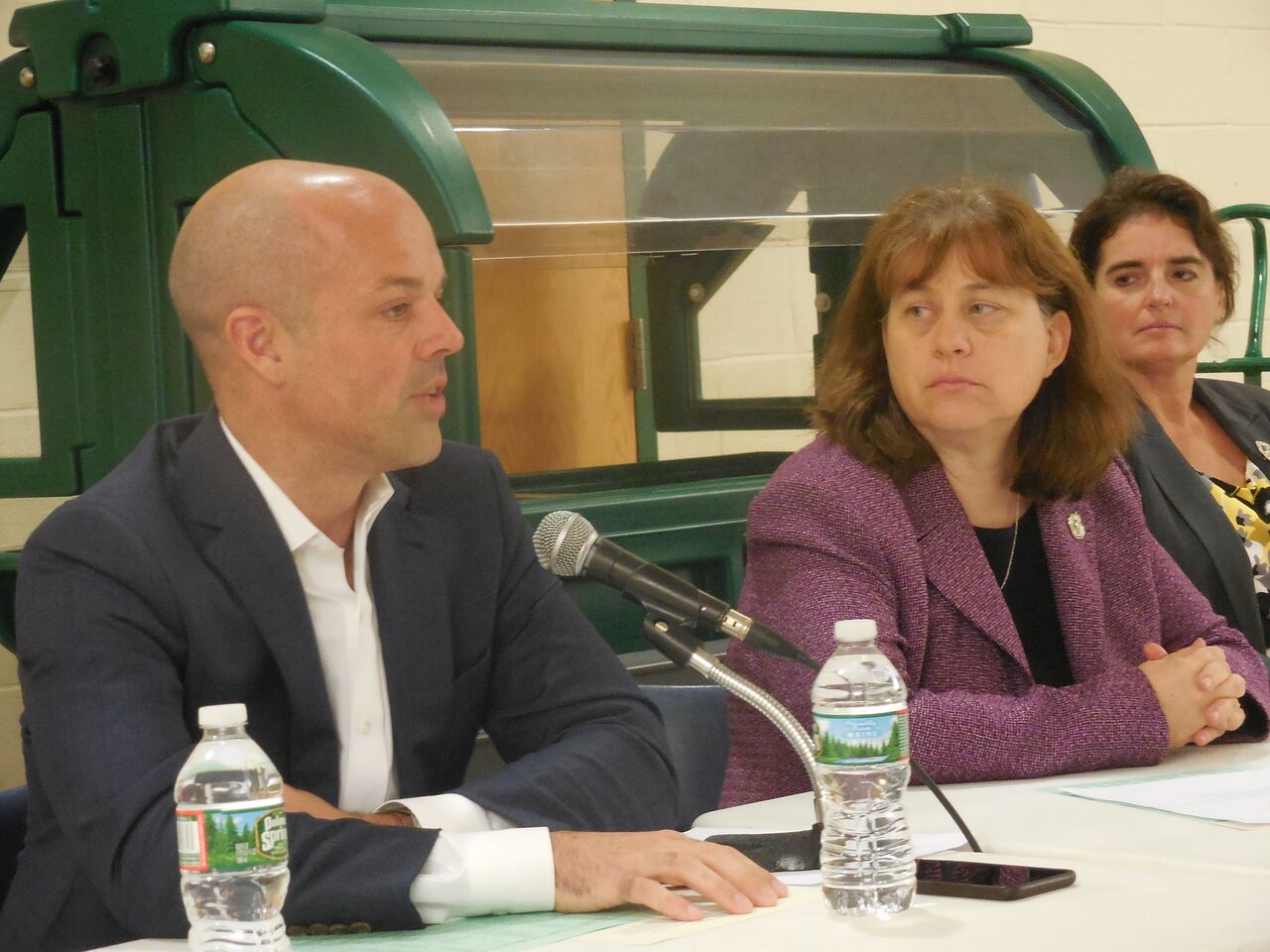 Lee — The state needs to reform the way it funds public K-12 education and more revenue is needed in order to accomplish that feat.

Lawmakers and school officials at the Massachusetts Association of School Committees legislative forum agreed on those two major problems — and more — last night in Lee Middle and High School cafeteria.

Foremost on the minds of the 75 or so people in attendance was Chapter 70, the state’s largest program of aid to public elementary and secondary schools. In addition to helping to fund the operating budgets of school districts, Chapter 70 also establishes minimum spending requirements for each school district (known as the foundation budget) and minimum requirements (known as the minimum local contribution) for each municipality’s share of school costs.

See video below of an explanation of Chapter 70 and the foundation budget, along with a comparison of how the state views the eligibility of Lee and Lenox for funding, based on the two towns’ relative wealth. The speaker is Glenn Koocher, executive director of MASC:

“Nobody’s really happy with this foundation budget system, except it does have a rational basis in fact,” said Glenn Koocher, executive director of MASC.

Koocher explained that the ability of a school district’s population to fund local education determines how much state aid the district gets from the state. As an example, he pointed to the fact that Lenox has 43 percent fewer students at an economic disadvantage compared to Lee, which is why the latter received significantly more aid than Lenox, even though the two towns are comparable in size.

In addition, Lee has 15 percent more students than Lenox but receives 61 percent more Chapter 70 funds from the state. Click here to see a more detailed comparison.

Koocher said another problem is that disadvantaged student counts are often lower than they should be. Many undocumented students remain uncounted by the state “because, if they come forward, they might be deported,” Koocher explained.

“When something is not as complicated as it seems to be, we say, ‘Look, this isn’t brain surgery,’ ” Koocher said.

To break the ice, Koocher told a story about how he once asked an actual brain surgeon how he uses the phrase. The doctor told him he says it’s not rocket science.

Koocher then asked a school committee member in North Andover, who also happened to be an astrophysicist for NASA, what he says if a subject is not terribly complicated. The rocket scientist replied, “We say, ‘It’s not Chapter 70 state financial reimbursement.'”

“Now comes the debate: How do we fix Chapter 70 and where do we get the money?” Koocher asked.

Answering that question was mostly left to the lawmakers in attendance. They pointed to an attempt that was made to reform the foundation budget. That effort failed, which caused some school districts in the Berkshires, including Pittsfield and Berkshire Hills, to write a letter to lawmakers on Beacon Hill complaining that the legislature “has violated the public trust by failing to revise the foundation budget funding for Massachusetts public school districts.” Click here to see an Edge story from last month on the letter.

See video below of the panel discussion, including questions from the audience:

The MLC (Minimum Local Contribution) is the local revenue source that funds the foundation budget. The state calculates each town’s MLC based on its perceived wealth and ability to pay. The state then backfills the difference between the MLC and foundation budget with Chapter 70 funding, which came into existence as a result of the Massachusetts Education Reform Act of 1993 that overhauled how education was funded in the state. So the higher a school district’s foundation budget and the lower its MLC, the more aid it gets from the state.

But of course, any time state spending is increased, it must be cut in other areas, or new revenues must be found. One new revenue source was a ballot proposition to amend the state constitution that amounted to a special 4 percent surtax on Massachusetts residents with incomes in excess of $1 million. The estimated $2 billion in revenue that the tax would generate was to be set aside specifically for education and transportation.

When the Senate passed the bill, the proposition was still on the ballot. But about a month later, the state Supreme Judicial Court, in a 5–4 decision, essentially ruled that the measure was unconstitutional and that, as such, could not be on the ballot. That meant that a key funding component for foundation budget reform had disappeared, which made the bill less attractive to lawmakers. The House had its own version but the two could not be reconciled by the legislative deadline, so the measure died.

“We had to be done by midnight on July 31 in an election year,” said Rep. William “Smitty” Pignatelli, D-Lenox. “And the clock just ran out. We had a difference of opinion on how to fund it.”

Pignatelli said there are more conservative-leaning members of the House than in the Senate, so restraint was required in the face of such a large spending increase whose funding source was questionable.

“Sadly, if we had a better revenue stream, we could have plugged it in place,” Pignatelli added. “But we don’t have the revenue stream to do that.”

“There was broad-based support for the millionaire’s tax,” said Rep. Tricia Farley-Bouvier, D-Pittsfield. “Now we have to start over again … What we know is we’re underfunding Chapter 70 by $2 billion a year.”

“The real solution,” Farley-Bouvier added, “is to get more revenue.”

“Enough is enough,” said Sen. Adam Hinds, D-Pittsfield. “That’s basically the way I’ve felt and it’s what I’ve heard from all of you. And yet still we come back disappointed.”

Hinds said he remains “slightly more optimistic” that something can be done in January, adding that “this and a few other issues have to be at the top of the list of this next session.”

Pignatelli said, like everything else, it comes down money. In his 16 years in the legislature, this last failed attempt was probably the third or fourth try at foundation budget reform.

“At the end of the day, there’s winners and there’s losers,” Pignatelli added. “The winners get more money; the losers get less money.”

As for a “magic bullet” that would provide the needed revenue, Pignatelli said there are several new revenue sources, thought to be “panaceas,” that have not yet come to fruition.

Casino gambling has finally arrived in Massachusetts, with the recent opening of the MGM in Springfield. The sale of recreational marijuana is now legal, though none of the stores have opened yet. He also cited online gambling as an “untapped revenue source” and “a real opportunity.” There are existing local-option sales taxes on meal and hotel rooms.

“I know what the hotel local-option tax did for the town of Lenox,” said Pignatelli, a former selectman in Lenox. “It saved Lenox from bankruptcy nearly 30 years ago.”

At the request of the town of Lee, Pignatelli has also filed legislation for a local-option gasoline tax that could generate an estimated $300,000 to $400,000 for the town of Lee’s roads and bridges. Pignatelli said the bill “finally got out of committee.” Click here to read it.

“We have to get really creative with our thinking,” Pignatelli. “But we need the money. Show me the money.”

Bill Cameron, who chairs the Berkshire County Education Task Force and is a retired superintendent of the Central Berkshire Regional School District, also spoke on the future of the task force, which, earlier this year, recommended the creation of a single countywide school district. Click here to read Cameron’s remarks or see the video below: