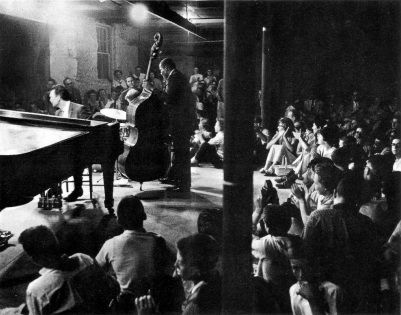 Lenox — It had all the makings of a 60’s-era college reunion whose invitees had no campus to return to. That’s because the legendary Music Inn in Stockbridge disappeared in the late 1970s.

But that didn’t stop a couple hundred people from filling the Lenox Memorial Middle and High School auditorium Friday afternoon (Aug. 25) for a tribute to the iconic Berkshire County music venue that over its nearly 40 years of existence featured some of the biggest names in the music business.

“All you old hippies — you look great,” said Olga Weiss, who with her husband Bob, along with David Rothstein, took over Music Inn in 1969. The audience, whose members’ heads included more than a few gray hairs, roared its approval.

Weiss was part of a panel that included Rothstein, publisher Larry Gadd, Boston University music Prof. Jeremy Yudkin, jazz drummer George Schuller and the “potting shed ladies” — so named because they were the denizens (or their descendents) of the bistro-like bar and restaurant on the grounds: Sarah Eustis (Rothstein’s daughter); Vera Lacocq; and Nancy Fitzpatrick, Rothstein’s former wife and scion of the Fitzpatrick family that owns the Red Lion Inn.

But the gathering and roundtable discussion at the Duffin Theater were more than just a vehicle for reminiscing about the good old days and lamenting a bygone era of musical history in the Berkshires.

Seven years ago Rothstein had a vision to capture the story and spirit of the Music Inn that still resonates in a wide community of people — not only among those who played there but among others who simply worked there or attended concerts.

In 2007 Ben Barenholtz, Schuller, Benjamin Barber, Casey Meade Rothstein-Fitzpatrick and others had collaborated to produce Music Inn, a documentary film, which has not yet been made available publicly but portions of which were shown at the event Friday.

Several attendees remembered Barber, the renowned American political theorist and author, an active and early contributor to the film and archives until his death last year. He was the son of playwright Doris Frankel and Philip Barber, director of the New York unit of the Federal Theater Project, whose second wife, Stephanie Barber, founded The Music Inn in 1959 and ran it in the 1960s.

“Ben has been to several reunions and so he is dearly missed today,” Najimy said.

The focus now is to launch a book project to document the Music Inn experience with photos and text — or what Najimy called “an upscale scrapbook.” Indeed, the Friday event raised money for that effort and for the The Mount, the Lenox estate of novelist Edith Wharton.

“This will all pass from memory if we don’t do something about it,” said Weiss, who also chairs the Lenox Historical Commission.

Publisher Larry Gadd explained the challenges in publishing a book of this sort and the expense that it will entail.

“We’re raising the money to do it,” Najimy said. “Today is the kick-off for that.”

To put the inn in some kind of historical perspective, Weiss cited a litany of events and important persons who gained prominence during the inn’s epoch: Rosa Parks; the Little Rock Nine; Betty Friedan, Martin Luther King’s “I Have A Dream” speech, the Gulf of Tonkin Resolution, the Great Society, the assassinations of Malcolm X and Robert F. Kennedy, and of course, Woodstock.

“The Music Inn was a kind of mini-Woodstock,” recalled Everett. “I think that’s what the town was afraid of — a hippie invasion.”

Everett noted the contrast in styles among the musicians playing at the Music Inn and next door at Tanglewood: “You had the Paul Butterfield Blues band playing at the same time as the Boston Symphony.” Further sharpening that contrast was the fact that the inn was located in the former barns and outbuildings of Wheatleigh, another muscular mansion put up in the Gay (18)90’s.

Indeed, there were incessant complaints about the inn from neighbors in both Lenox and Stockbridge. During the Inn’s last few years, Rothstein spent much of his time in the Selectmen’s offices and meeting with lawyers in an effort to fend off complaints, injunctions and lawsuits.

By 1979, disco was in its ascendancy, the hippie milieu was in decline, and beer began to replace weed as the drug of choice. A gate crashing event at an Allman Brothers show near the end of that summer convinced Rothstein it was time to end a proud era.

“Some still call that the day the music died, but in this case it was more like benevolent euthanasia,” says a history published in the Music Inn Archives.

Rothstein spoke of the urgency of further documentation of the inn’s history before the trail gets even colder.

“If you were there, you wouldn’t remember it,” Rothstein said. “And if you remember it, you weren’t really there.”

Others recalled the Lenox School of Jazz, which briefly existed in the same location. It was a place where promising young musicians learned from a faculty of the world’s greatest jazz masters: Dizzy Gillespie, Max Roach, Oscar Peterson, Jimmy Giuffre, John Lewis, and Schuller’s father Gunther, among others. Yudkin, the BU music professor, was a panelist on the roundtable discussion and was selling copies of a book he wrote about the jazz school.

Music Inn alumnus Eliot Osborn, a founding member of the The Outerspace Band, performed a tribute to Chuck Berry’s “Johnny B. Goode.” (See video below) There was a surprise appearance by folk singer and Berkshires legend Arlo Guthrie, who reminisced about the inn. Guthrie’s daughter Sarah Lee and her husband Johnny Irion took the stage and performed a Berkshires original: ‘When the Lilacs Are in Bloom.’ (See video at end of article)

The elder Guthrie approached the roundtable participants and told several stories, one of which was about how his father, Woody Guthrie, and Pete Seeger were among the first to “officially play at the Music Inn.” Indeed, Arlo himself played with Seeger in the late 70’s at the inn.

“The one recurring figure was Pete Seeger,” Guthrie said to applause.

Guthrie said Seeger reminded him only a few years before he died that folk music and jazz were “the original social media.”

At the end of the season in 1978, Guthrie approached the town of Stockbridge about doing a fundraiser concert with Seeger, but the town had forbade the inn from holding concerts after Labor Day. So Guthrie took them to court and won.

“And unlike my appearance at the Lee court, where I actually had to pay a fine and pick up the garbage, this one we actually won,” Guthrie recalled. “I had never won in court before. And so it sticks in my mind as one of the highlights of my life.”

It was a lighthearted reference to Guthrie’s now-legendary hit Alice’s Restaurant — so named for Guthrie’s friend Alice Brock — in which the singer was arrested and fined for littering in 1965 by Stockbridge Police Chief William “Obie” Obanhein.

The list of high-profile — and no-so-high-profile — musical acts that performed at the Music Inn is long and rather glorious. Two years ago, Edge history columnist Carole Owens provided a partial list in a splendid piece entitled The Music Inn, Tanglewood’s antithesis next door.

“There was a revolution going on,” Rothstein said. “The music predicted it, reported it and reminisced it.”

Sarah Lee Guthrie & Johnny Irion perform “When the Lilacs Are in Bloom.”