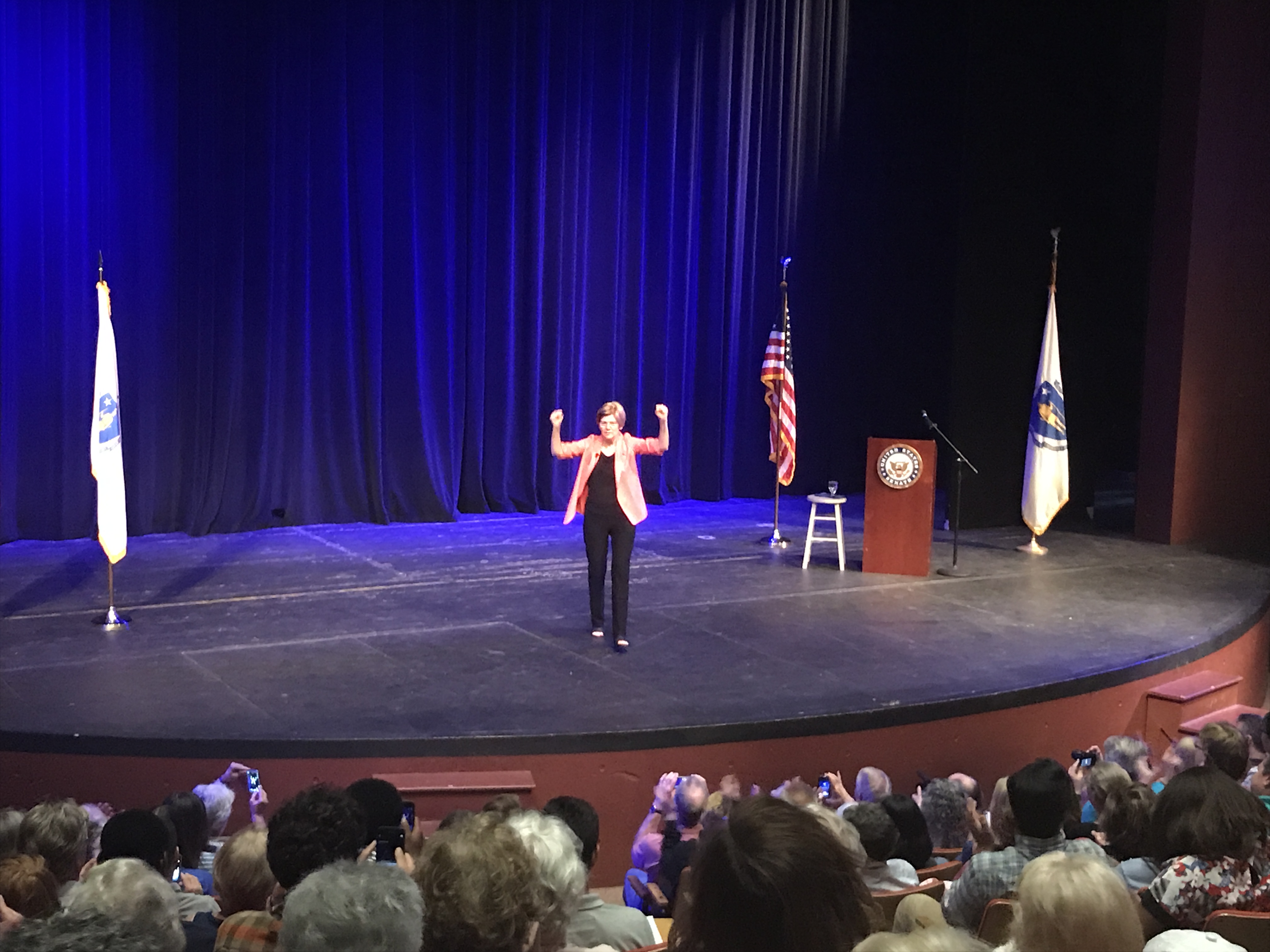 Pittsfield — Town hall events with senators and congressmen around the country have become theatrical as of late. Videos of U.S. Sen. Tim Flake (R-Ariz) being yelled at by a woman afraid of losing her healthcare and reports of people filing into crowded auditoriums only to find out that their congressman has fled the scene, have gone viral. If U.S. Sen. Elizabeth Warren’s (D-Massachusetts) town hall at Berkshire Community College Saturday (July 8) was a spectacle, it’s because it was vastly different from the ones in the headlines. Senator Warren took the stage Saturday morning not to boos or shouts of anger but to a standing ovation fit for a rock star. As she entered the stage, to the acclamation of the crowd, she proclaimed: “If this isn’t a moment to stand up and fight back, then I don’t know what it is.”

Before an audience of 600 in The Robert Boland Theater at Berkshire Community College and an addition 200 watching from monitors outside, Pittsfield Mayor Linda Tyler introduced U.S. Sen. Elizabeth Warren.

Wasting no time, Warren jumped right into policy, her first target being the GOP healthcare bill to replace Obamacare. “Let me be clear” she said, “What they have is not healthcare. It’s a tax cut. Three out of four people in nursing homes rely on Medicaid, and what do the Republicans want to do? Cut cut cut. They want to gut Medicaid because it’s the only way for them to produce tax cuts for the millionaires and billionaires.”

While Republican think-tanks like The Heritage Foundation argue that the GOP’s healthcare bill will lower premiums, the latest CBO (Congressional Budget Office) report found that the Republican proposal would throw 23 million people off their healthcare by 2026. As a result, the bill is widely unpopular, with Republican senators Rand Paul, Ted Cruz, Ron Johnson and Mike Lee all saying they are not ready to vote for it.

But Senator Warren cautioned: “This bill is not dead yet; it could still pass so we have to keep fighting.” She paused, her hands clenched into fists and a look of anguish on her face she held back her frustration. It was a rare moment for the audience to witness a politician overcome with genuine raw emotion on stage. Taking a deep breath, she continued, “America doesn’t want this bill, but the Republicans are pushing it anyway. If it wasn’t for people like you, people who go to town halls, people who show up at rallies, people who are engaged, the Affordable Care Act would be dead already.”

Continuing from that point, Senator Warren used the healthcare fight as an example of how activism could help resist the Trump agenda, getting to the crux of her address. “So here is the deal, here is why I wanted to be with you today,” she said. “These fights are huge. The days when we could assume what was going on in Washington and pay attention from time to time are over. Now we are in a world where Washington is in a fight, literally over our lives. A fight that measures what kind of people we are, how we treat our elderly, our children, how we treat our fellow human beings. Republicans have decided that America works for those at the top. We have to keep fighting. We have to reach out to our friends, to strangers at the supermarket, to Republicans and Democrats and show them how these fights affect their lives directly. The point is to be persistent.”

Following her remarks, Warren opened up the forum to questions. State Sen. Adam Hinds drew numbers from a lottery system to determine which questions would be asked. One by one, Massachusetts voters voiced their concerns about healthcare, student debt, and climate change. One woman even asked “How can we get rid of number 45,” declining, in protest, even to utter the President’s name. Warren cautioned that while impeaching Trump may sound enticing to Liberals, there are major policy fights now that demand more focus.

One of the toughest questions she faced was what the U.S. foreign policy in Syria should be. She acknowledged that she didn’t have a clear solution to offer, saying, “We need to fill the vacancies in the State Department first so that we have to tools necessary to deal with ISIS.”

One of the most striking moments of the morning came at the end, when a Latino student told Warren that his peers were “scared” to go to college because of the overwhelming financial burden it would saddle them with.

Student loan debt is one of the Senator’s more critical domestic issues, so she dove right in. “The Republicans would not let me take my bill, which would refinance student loans, to the floor,” she said, then continuing, with evident emotion: “Let me just put it this way, I grew up in a family that lived pay check to pay check. All I wanted was to be a public school teacher. When it came time for college I got a scholarship, but because I had it all figured out, I got married at 19 and dropped out of school,” she said, holding back laughter. “Luckily, I ended up living near a commuter college that cost $50 a semester so I went. I am the daughter of a janitor who ended up as a college professor and a United States Senator because America invested in education.”

Senator Warren lamented that the days when a college education was affordable have vanished. She pointed out that 70 percent of students graduate from public universities and that there is a direct correlation between a highly educated population and economic prosperity. One thing that gives the Senator hope, though, is that the American people will fight the Republicans and Education Secretary Betsy Devos who want to privatize education — effectively making it less accessible to middle and lower class Americans.

Before leaving the stage she declared: “Here is the deal, I was sent to Washington to fight for you. There are a lot of fights and we are going to lose some of them, I know that. But we are not going to go down on every one of them. We are going to win. And you bet I’m running for re-election in 2018.” Once again the audience stood up and applauded — this time with tears in their eyes.