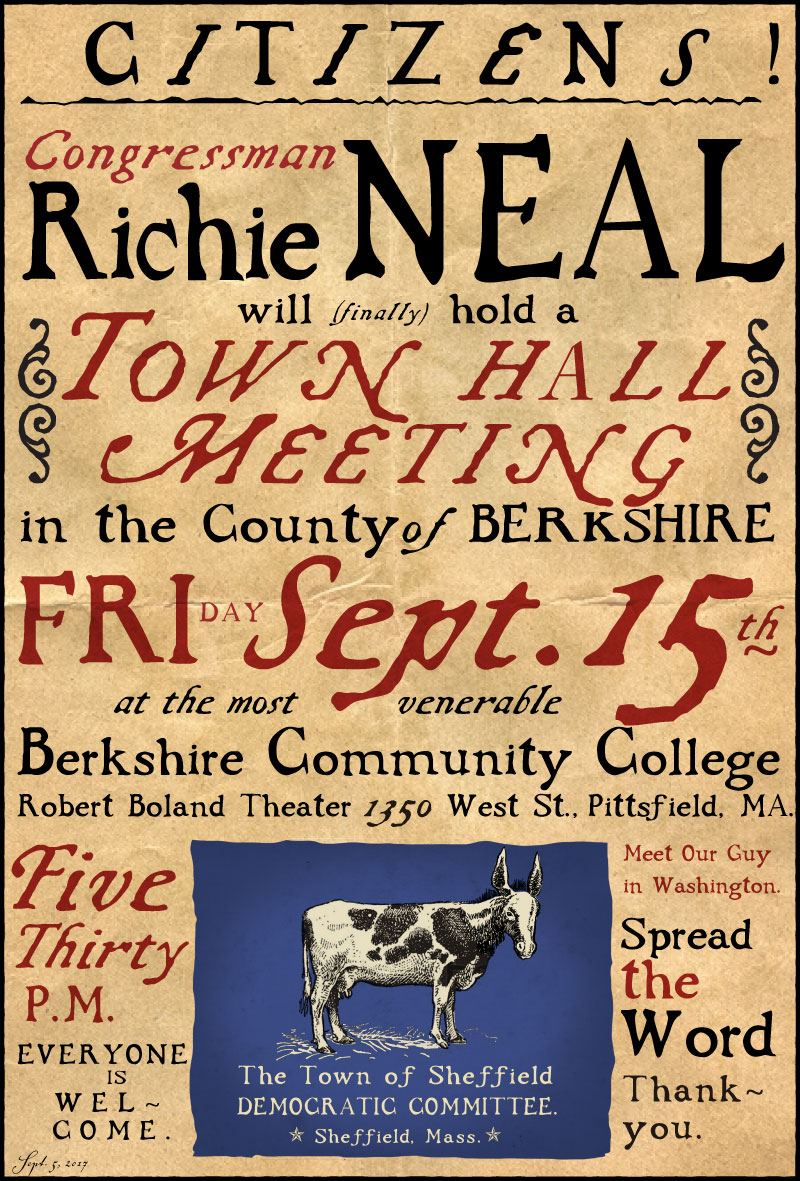 Pittsfield — After multiple requests from constituents asking him to come to the Berkshires to do a town hall-style meeting, Rep. Richard Neal is finally doing just that.

Neal’s Springfield office sent out a notice last week that the Democratic congressman who represents western Massachusetts would be in Pittsfield for the forum on Friday, Sept. 15.

Neal has the reputation of being more centrist than most Democrats in Berkshire County, so some of them have been skeptical of his motives in declining to hold a town hall-style meeting.

“My feeling is he has a reliably blue district and he needs to be much better about speaking with his constituents,” said Rick Brown, treasurer of the Sheffield Democratic Town Committee. “The majority are his supporters and he shouldn’t take them for granted.”

Brown added that, Neal, who is the ranking Democrat on the powerful House Ways and Means Committee, is a party leader.

“Obviously, we’re very pleased, as it took months of discussion to get to this point because he has concerns about the format,” Brown said. “I hope Friday is extremely use for him and the people he can help … I would hope he would see that as an opportunity.”

When Neal came to Great Barrington Town Hall in June to announce a $300,000 Brownfields Community Wide Assessment grant from the U.S. Environmental Protection Agency, this reporter asked him whether he would commit to doing a town hall in the Berkshires.

“We’ve talked about it. We’d like to do one in the fall,” Neal said. “I’m not averse to doing them and I’ve done them earlier on in my career.”

Neal quickly pointed to an experience he and fellow Congressman Jim McGovern (D-Worcester) had eight years ago at a town hall at the UMass Medical School in Worcester (see video at the bottom of this page). In a packed lecture hall, the two were heckled and booed by a hostile crowd while trying to rally support for the Affordable Care Act.

This event occurred at the height of the Tea Party’s feverish opposition to the initiatives of President Barack Obama, who had been in office only a few months. According to the Telegram & Gazette, “McGovern was likened by an attendee to Josef Mengele, the Nazi officer who performed experiments on concentration camp survivors.”

“He basically has said, ‘I don’t want to do this anymore’,” said Ben Hillman, who chairs the Sheffield Democratic Town Committee. “Some people are really annoyed that he doesn’t meet his constituents … He goes for photos ops, so this is a good development.”

In response to Edge inquiry earlier this year, Billy Tranghese, Neal’s chief of staff and press secretary said, “Congressman Neal has held numerous public forums in Berkshire County including the Act Now: Civic Participation Workshop on April 1st at Berkshire Community College and the 4 Freedoms March in Pittsfield in January. He also participated in two well-attended and highly publicized town halls recently in Chicopee and Boston.

“Despite an active legislative session in Washington, the Congressman returns home to western Massachusetts every weekend where he keeps an active public schedule,” Tranghese continued. “He plans to hold additional events in the district to continue to hear the interests and concerns of his constituents.”

Resistance activist Susie Kaufman of Stockbridge and Brown have both expressed concern about Neal’ lack of substantive engagement with his constituents.

“Our feeling was doing those [town halls] was part of a congressman’s job,” Kaufman said in an Edge interview. “In these perilous times, we especially need to be reassured that we are working together with the person who represents us.”

Kaufman observed that Neal’s visits to the area typically involve “dispersing money, which is a good thing, but it’s not the same as exchanging views on the issues.” However, she added that, “It is extremely gratifying that during the course of six months we have prevailed. I’m very pleased that the process worked.”

Michael Wise, who chairs the Great Barrington Democratic Town Committee, was not one of those who complained about Neal’s outreach efforts in Berkshire County. He said since South County was added to his district in 2013, “Neal has been out to Berkshire County reasonably often — which is to say, often enough for me to have had two or three non-trivial conversations with him over the last couple of years.”

“Although he has a reputation as a relatively conservative Democrat, he has come down on the right side of the big issues,” Wise told The Edge. “He’s been skeptical about the practical and political feasibility of single-payer health care, but progressive advocates on this issue report that he’s met with them to hear them make the case, and I think he’s open to persuasion.”

Still, Wise acknowledged that Neal has some work to do in terms of satisfying the demands of a politically active constituency, adding that, “I hope this town hall becomes an occasion for him to have a conversation with a wider audience.”

The Town Hall forum will be held Friday at Berkshire Community College’s Robert Boland Theater in Pittsfield. Doors will open at 5 p.m. and the program will begin at 5:30 p.m. Click here to RSVP. If you require any special accommodations, please contact Jonah Sykes at 413-236-2116 or email jsykes@berkshirecc.edu.

See video below of a Neal/McGovern town hall in Worcester in 2009: