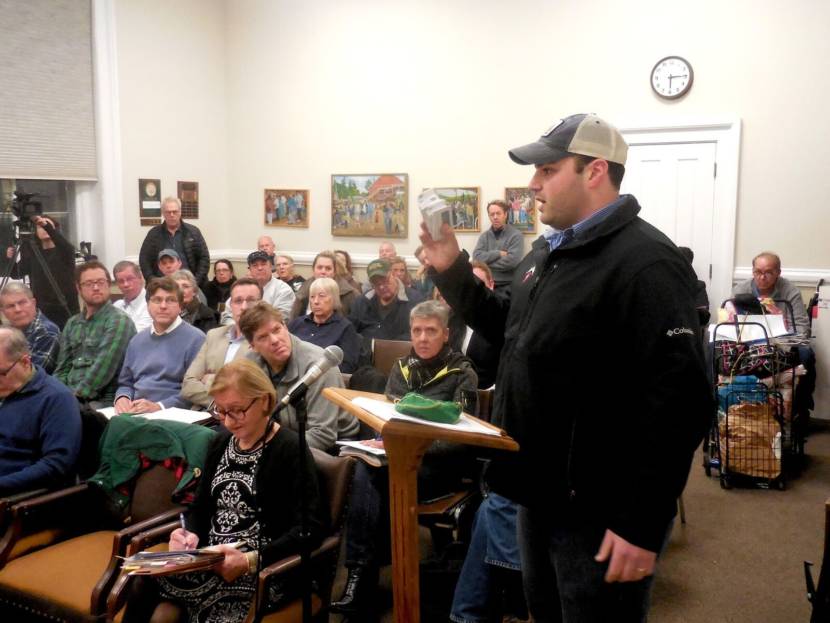 At the Nov. 26 meeting of the Great Barrington Selectboard, Joe Domaney, whose family owns the liquor store that bears his last name, held up a stack of fake identification cards he said had been confiscated in the store from would-be underage buyers. Photo: Terry Cowgill

Great Barrington — There hasn’t been this much commotion about alcohol in Great Barrington since the repeal of Prohibition. Or so it seemed last night as the selectboard tried to sort out its policy on liquor licenses and evaluate two new applicants for permits.

In the end, the board listened for an hour to merchants, members of the public and even a liquor lobbyist, Robert Mellion of the Massachusetts Package Store Association, who drove three hours to get to the meeting. Three board members disclosed the appearance of a conflict of interest but voted anyway, resulting in beer-and-wine licenses for the Berkshire Food Co-op and Rubiner’s Cheesemonger’s.

Furthermore, over vehement objections from current license holders, an identically divided board voted to abandon its current policy on the number of licenses until a new policy can be drawn up.

See video below of the discussion of a possible change in liquor license policy on the part of the Great Barrington Selectboard:

Both Ed Domaney and his son Joe, who own Domaney’s Liquors, cast the issue as a matter of public safety. As evidence of their vigilance, the younger Domaney held aloft a stack of fake identification cards the store had confiscated. Employees of new licensees such as Rubiner’s and the Co-op would not be as well trained to detect such fraud, they said.

Domaney further explained that, if he or his staff make a mistake, it could cost him his entire business, which his family has owned since 1973. But he urged the board to keep emotions out of its decision.

“My son has a bag of IDs we’ve confiscated,” Ed Domaney said. “It’s a bag of possible lives we’ve saved. We need you to take the personality out of this and we need to vote with your heads, not your hearts. You should be thinking with your heads for the safety of our children.”

There were other package store owners and managers who spoke in opposition, including Ray Almori (Plaza Package) and Joe Aberdale (Aberdale’s in Housatonic). Other were present but did not speak: John Tracy (Gorham & Norton) and Joe Smegal (Cellarbration inside the Big Y).

Also speaking was Great Barrington resident David P. Ryel, who owns Berkshire Liquors in Lee, though he did not identify himself as a package store owner. While offering little in the way of evidence, Ryel said more licenses would have a negative effect on a wide range of economic data points.

All the package store owners insisted they were not afraid of increased competition. But some observers were unconvinced.

Town moderator and zoning board of appeals member Michael Wise drew on his 15 years as a lawyer for the Federal Trade Commission as well as his work overseas with the Organization for Economic Cooperation and Development. At the FTC, Wise gave advice on, among other things, competition policy.

“I can’t count the number of times I heard somebody come into my office from an industry and say, ‘Competition is a wonderful thing but it doesn’t work in my industry,'” Wise recalled.

Wise said state law is one matter, but he questioned on philosophical grounds the idea of the town itself placing additional limits on the number of liquor licenses.

“This is exactly the kind of thing that the market will take care of,” Wise continued. “If it doesn’t work, somebody will leave. If there is an opportunity, somebody will enter. I would encourage the board to revisit and maybe remove any local limitation we have on the number of liquor licenses we have.”

Board Chairman Steve Bannon explained the history behind the current policy, which Selectman Ed Abrahams said wasn’t really much of a policy at all. He referred to a 2003 memo from former town manager Burke LaClair. Click here to read it, along with accompanying documents.

The state sets a quota for the total number of licenses based on year-round population. Census figures set Great Barrington at two all-alcohol licenses and five beer-and-wine licenses. Permits to serve alcohol in restaurants and bars are not included in that quota.

But the town currently has eight total licenses, only one of which is beer-and-wine only. According to Abrahams, this is because, many years ago, there were a few seasonal licenses that were converted to year-round.

At any rate, since the quota for beer-and-wine licenses is five and Great Barrington has only issued one, that leaves room for four more, which is why Rubiner’s and the Co-op felt emboldened to ask for one.

Still, Bannon said, he was advised by town counsel that, in evaluating applications for licenses, the board must consider whether the potential licensee would “serve the public need and protect the common good.” That, evidently, is why so many existing licensees came forward to warn of harm to the town if more members were let into their club.

LeClair had recommended to the board of selectmen, as it was known in those days, that it cap the number of licenses at the current level of eight. But that measure failed twice at town meeting, the second time by a margin of 218–62. So there is effectively no such constraint at the current time, other than the subjective judgment of the board on whether an applicant “serves the public need and protects the common good.”

So the board voted 3–2 to abandon its current policy until such time as it could come up with a better one. Voting for were Abrahams, Bill Cooke and Kate Burke. Bannon and Dan Bailly voted to keep the current policy on the books.

See video below of the selectboard debating the current policy before voting to abandon it:

That split repeated itself twice over the course of the next hour as the licenses for Rubiner’s and the Co-op were narrowly approved. The three who voted to approve the licenses—Abrahams, Cooke and Burke—disclosed perceived conflicts.

Both Abrahams and Cooke were until a few hours before the meeting, members of the Co-op. Both withdrew their memberships before the vote. Abrahams said he has during the course of his membership received rebates from the Co-op. The largest was about $7, so it never occurred to him that there would be any financial conflict.

Bailly, who was clearly sympathetic to the package store owners, laughed and questioned the timing, suggesting the two selectmen might renew their memberships the next day.

“That would be illegal,” Abrahams replied.

Burke said she had filed a disclosure form with town clerk Marie Ryan that she had worked for Rubiner’s from 2011 to 2016. In addition, as general manager of the Great Barrington Farmers Market, there are grants from the Co-op that pass through the market, but they do not affect her employment, she said.

Bannon said the disclosures were “cleared by town counsel.”

As expected, both Matt Rubiner, who owns Rubiner’s, and Dan Seitz of the Co-op’s board, spoke in favor of expanding the number of licenses. Rubiner acknowledged that he had applied for a beer-and-license 14 years ago and was denied. He did not recall exactly why.

Both Rubiner and Seitz also made presentations for their beer-and-wine license applications. Click here to see the Rubiner’s documents and click here to see the Co-op’s. After more than an hour of discussion, both were approved by the same 3–2 vote.