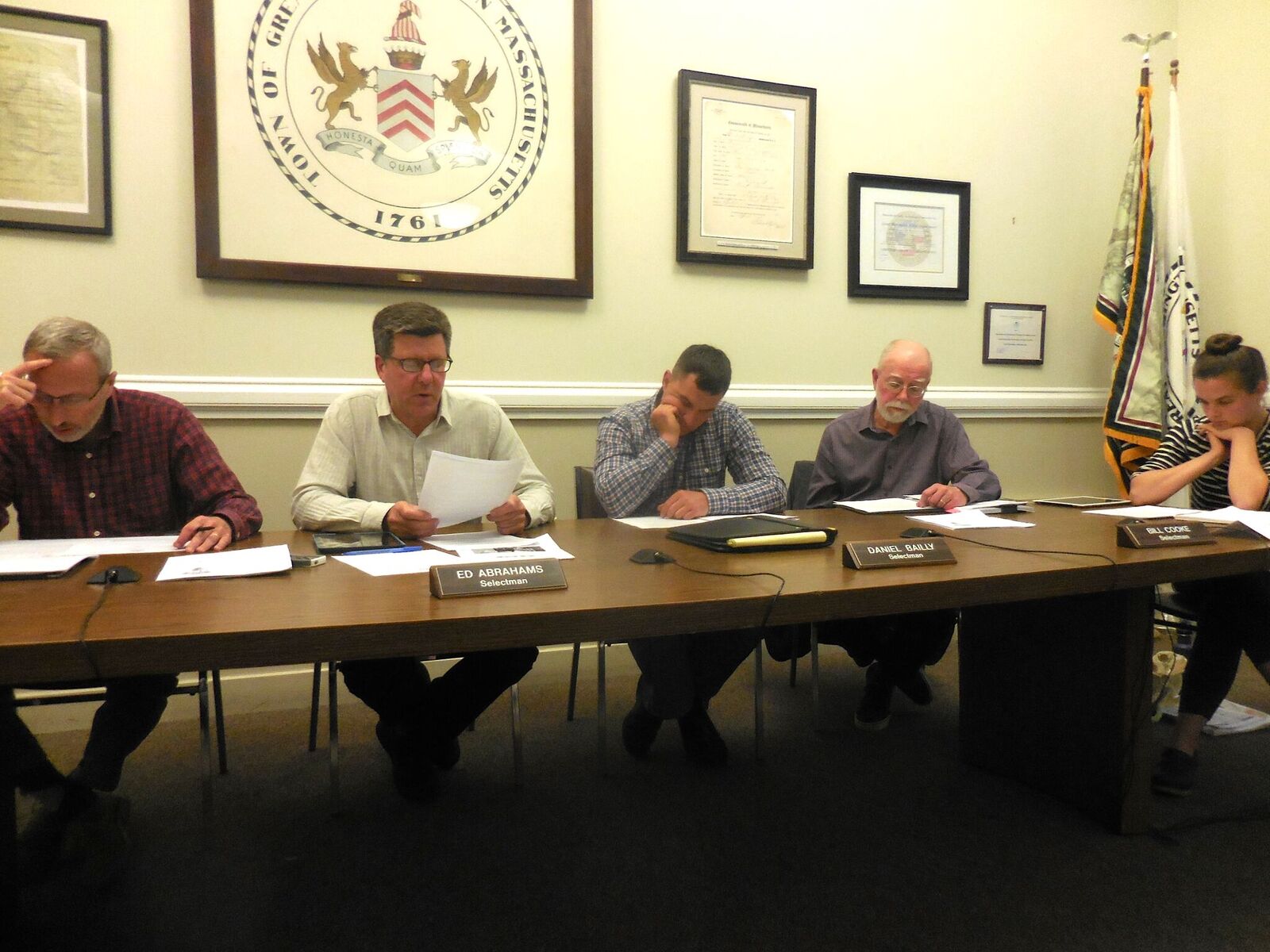 Great Barrington — If all goes according to plan, the town is on the verge of seeing two recreational marijuana retail establishments opening in a matter of months.

One of them, Theory Wellness, opened its doors last year as a medical marijuana dispensary, but will also offer so-called adult-use marijuana (21 and older) soon. Another, the fledgling Calyx Berkshire Dispensary, is looking to open its first recreational store in downtown Great Barrington.

Consequently, the selectboard has turned its attention to the host agreements all such operators of retail marijuana establishments must negotiate with the towns in which they are located. The agreements typically include a cut for the town of a percentage of the sales.

In anticipation that there could be more such establishments approaching the town in the future, the board, led on this issue by Selectman Ed Abrahams, is trying to come up with a template that will serve as a model for all host agreements that might come up.

See video below of the discussion at Monday’s selectboard meeting:

“The hope is that we create one template agreement that everybody gets so that everybody’s looking at a level playing field,” Abrahams said at Monday’s meeting in Town Hall.

Abrahams, who is also vice chairman of the selectboard, met with town accountant Susan Carmel and assessor Chris Lamarre; did some research to see what other towns have done; and consulted with KP Law, the Boston law firm that handles legal work for the town.

Abrahams then hammered out a draft agreement that could be used for any applicant for a retail cannabis establishment. Click here to see what Abrahams came up with.

As is the case with all businesses, all personal and real property owned or used by the operator will be subject to town taxes on such property. Since Great Barrington does not have a split rate, businesses and residential property owners alike pay $14.95 per $1,000 of assessed value.

State law allows the town to add 3 percentage points onto the 6.25-percent state sales tax on recreational cannabis products (a state excise tax of 3.75 percent is built into the retail price). In addition, Abrahams added a so-called community impact fee of an additional 3 percent of quarterly gross sales.

Finally, the operator must make an annual $10,000 charitable donation to a nonprofit service provider based in Great Barrington. That provider should “provide health, wellness and/or substance abuse education programs.”

No one has yet done the math to calculate exactly how much all these taxes and fees would mean to the town if, in the next few months, both Theory and Calyx are given adult-use licenses by the state Cannabis Control Commission.

But it could amount to hundreds of thousands of dollars a year in a town with a nearly $27 million budget for the coming year (that total includes the town’s assessment from the Berkshire Hills Regional School District).

Though he does not think it is good idea, Abrahams included in his draft for purposes of discussion a provision that urges the operators to give preference to Great Barrington residents in hiring and in the selection of contractors.

“Not sure I like the idea of us telling them who to hire. First of all, we have a labor shortage in town,” Abrahams said. “If I were running a business, I would aim for local residents anyway. They’re more likely to get to work on time.”

But newly elected board member Kate Burke said she liked the provision, even if it was no more than advisory in nature.

Donna Norman of Calyx agreed. She had drafted an agreement herself and given it to town officials. Norman said she “put that clause in my agreement to hire local because I think it’s important to bring as many local jobs into town as possible.”

“I don’t totally agree with it but I think it’s loose enough that it’s not going to cause a problem anyway,” Bannon said.

Brandon Pollock of Theory Wellness added that he agreed in principle that hiring locals was an admirable goal. And his company is looking to fill numerous positions.

“We have no concerns here with respect to hiring,” Pollack said. “We do have 20 open jobs listed now that we’re trying to fill so we will do the best we can for local folks, but we’re not going to be able to fill 20 jobs with Great Barrington people.”

Theory is one of the state’s 26 licensed medical marijuana dispensaries. But Pollack said the company will be selling both medical and recreational as soon as the company obtains its adult-use license.

“We’re going to keep our medical side open to serve patients,” Pollack said. “When someone enters the facility as a medical patient, they will go into a separate queue. There will be separate sales stations with one of those velvet ropes dividing the floor.”

The board passed Abrahams’ proposal unanimously with only a minor revision. The document will go to town counsel and town manager Jennifer Tabakin to hammer out any details need to finalize the agreements. The agreements are for five years. The town can terminate them for-cause, according to Abrahams.

“If we find they are selling to minors, it would be like liquor stores and we would have to go to the state,” Abrahams explained. “And if they close up, the agreement is terminated.”

Theory opened last year in a new building on Stockbridge Road. Calyx is eying an empty storefront on Main Street for its adult-use operation. As for licensing, existing medical medical marijuana dispensaries qualify for expedited review.

Theory has scheduled such a community outreach forum for Tuesday, June 12, at 6 p.m. at the Fairfield Inn & Suites on Stockbridge Road. Calyx has not yet announced a date for its forum.

The cultivation, sale and use of recreational cannabis-related products was legalized in Massachusetts through a 2016 ballot initiative. Sales are expected to begin in July at fully licensed and completed retail outlets. Implementation of the new law was left to the hastily created state Cannabis Control Commission. One such facility is already under construction in Sheffield.

Every town and city in Berkshire County, and all but seven in western Massachusetts, voted for the recreational cannabis law. Great Barrington, for example, voted for the measure by the overwhelming margin of 64–36 percent, considerably greater than the statewide margin of only 53–46 percent.

And earlier this year, marijuana was the cause of a battle between the Great Barrington planning and select boards over which should be the special-permit-granting authority and whether most, if not all, of the facilities should require a special permit. The selectboard won that struggle on the floor of the annual town meeting last month.