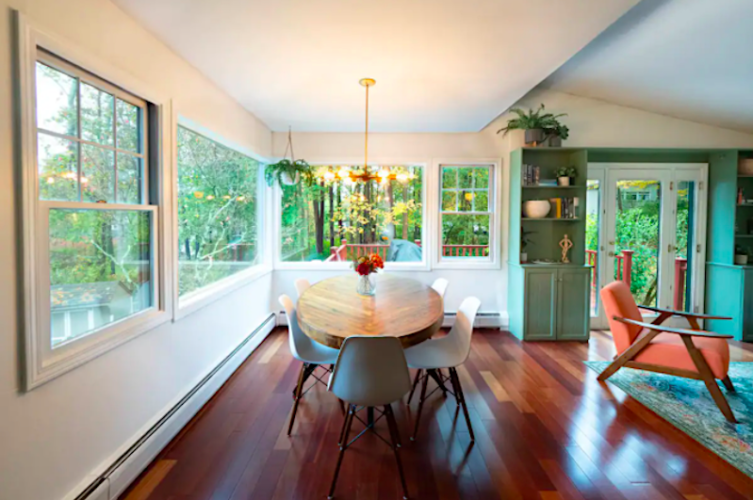 This Great Barrington apartment is currently used as a short-term rental. Image via Airbnb

GREAT BARRINGTON — Resolutions were nowhere in sight but spirited debate permeated the air during last night’s discussion of how to address the issue of the growing number of short-term rentals in Great Barrington.

At issue is a proposal by selectboard vice chair Leigh Davis for a bylaw that would dramatically lower the number of short-term rentals available in Great Barrington by forbidding operators of short-term rentals (STRs) from renting residential units or rooms not located within the operator’s primary residence or on the same tax parcel as the operator’s primary residence.

In other words, out-of-towners who buy residential properties in the town would not be allowed to rent them out for fewer than 28 consecutive days, which is how Davis defines STRs.

See Edge video below of last night’s Great Barrington Selectboard meeting. Fast forward to 14:13 to view the discussion on short-term rentals, which lasted more than 100 minutes:

At last night’s selectboard meeting, chairman Steve Bannon said the goal was for the board to come to a general agreement on the key points of Davis’ proposal and the Planning Board proposal originally drafted by member Jonathan Hankin. Davis also read a statement at the beginning of the meeting before the discussion began. Click here to read it and see the excerpt below:

“It is not a one-size-fits-all solution to our affordable housing crisis. What it is, is one piece of a multifaceted puzzle that preserves balance in our community so that people who work here can afford to live here, and people wanting to find homes — or remain in them — can do so.”

But harmony was in short supply, as Davis tangled with selectboard member Ed Abrahams in a sometimes tense discussion of whether her proposal would actually address the town’s affordable housing crisis, with Davis insisting it would.

Abrahams pressed Davis several times on her proposal’s purpose, which he characterized as “vague.” He took issue with phrases such as “Protect neighborhoods from undue commercial activity” and “preserve housing options for residents by deterring commercial interests from buying housing to use primarily as short-term rental businesses.”

Abrahams took exception to the element of Davis’ proposal that limited the ability of STR operators to those for whom the property is their primary residence. Abrahams used an example of a retired couple who lived in Great Barrington full time and retired to Florida for more than six months a year. They kept their house in the Berkshires and rent it out via Airbnb or Vrbo to help them afford retirement.

Under Davis’ proposal, “They can’t keep their home unless they can afford to leave it empty,” Abrahams insisted.

“We have a housing shortage in Great Barrington,” Davis replied. “There are 200 short-term rentals that are available; 56 of those are owned by investors. Those are homes that could be lived in by people who want to live here full-time … we have zero long-term rentals available in town.”

Bannon tried to play moderator but to no avail. Fellow board member Garfield Reed, who is the selectboard representative to the town Affordable Housing Trust, endorsed Davis’ proposal. Selectboard member Eric Gabriel had recused himself from the discussion because he is a landlord.

Abrahams pointed to an STR bylaw in Stockbridge. None of his fellow board members were familiar with it but Abrahams said he thought its purpose was clear and its language less vague.

The purpose of the Stockbridge bylaw, which was passed last year at the annual town meeting, is to “aim to balance private, neighborhood, and municipal interests by ensuring compliance with applicable Massachusetts General Law regarding Short Term Rentals and ensuring observance of residential health and safety regulations.”

“If you will stand up at a town meeting and say the purpose of this is to lower property values, I’ll stop talking now because it will never pass,” Abrahams said.

“That’s not what I said,” Davis replied.

Several of the 42 attendees spoke out, most against Davis’ proposal. Dan Ruderman, Gabrielle Senza, and Nan Wile did support the proposal, citing the critical need for affordable housing.

Town Finance Committee member Michelle Loubert cited Abrahams’ example of retirees being unable to rent out their homes in Great Barrington for fewer than 28 days if they spend more than six months elsewhere — a situation she said could adversely affect her and her husband Bruce when they retire.

Architect Peter Franck and Trevor Forbes, who owns the Hideaway Inn bed and breakfast on North Plain Road, also spoke out against it, as did longtime Great Barrington resident Dave Long and home builder and renovator Ron Blumenthal.

But the strongest language came from Lucas Merchant, the co-founder of the Boston-based MerGo Group, which placed a billboard — since removed — on State Road across from Plaza Package, urging homeowners to “monetize your vacation home.”

“It’s trying to force people to sell. I don’t see any data about how the 56 houses will support affordable housing,” said Merchant, who owns a home on Castle Lane that he sometimes rents out. “I find it frankly terrifying that we’re talking about wanting to drive property values down in town. I don’t even know if that’s legal.”

As an alternative, Merchant suggested that a special tax or fee could be imposed on STRs to support the creation of more housing.

Bannon said he would ask town planner Chris Rembold to come back to the selectboard’s January 24 meeting with data. Meanwhile, the rest of the board could familiarize themselves with the Stockbridge bylaw.

“We’re not going to all agree on this,” Bannon said near the end of the meeting. “I guarantee you when we’re done with this, not everyone will be happy on this board, but we will have accomplished something and we haven’t done that tonight.”