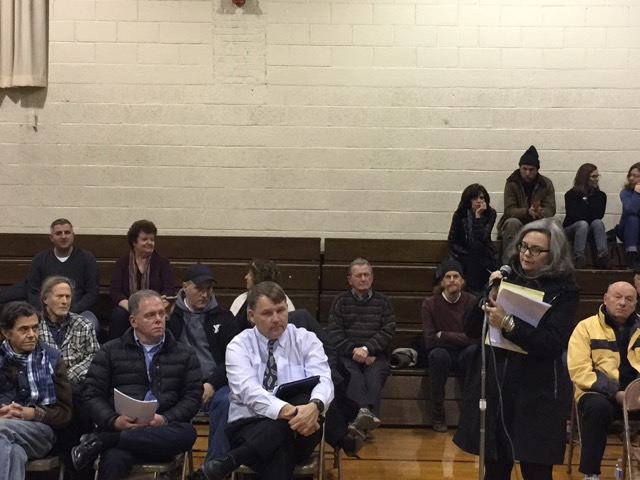 Great Barrington — For the first time, town officials and ratepayers heard publicly from state authorities who regulate the embattled Housatonic Water Works, the private water company that provides water to the Housatonic section of Great Barrington.

And it looks like there is a reason why the state has not clamped down on the company for its discolored water. According to Brian D. Harrington, deputy regional director for the bureau of water resources at the state Department of Environmental Protection, the state is primarily concerned with water quality and rates but not “esthetic” issues such as brown water.

“If someone is meeting the primary standards that we are enforcing, it doesn’t leave us with something to compel an activity,” Harrington told the selectboard Monday night. “For instance, if there were bacteria violations, we would be in a position to say, ‘You have to take the following actions to address the bacteria violations because that’s a primary drinking water standard.’ Here you’re dealing with some esthetics and other challenges that we don’t have a specific standard upon which to necessarily compel somebody.”

Harrington and his DEP colleague Deirdre Doherty appeared via Zoom at Monday night’s selectboard meeting at the request of the board to answer questions about how the state oversees the tiny private water company and what can be done to address the rusty water problem that has plagued the system for years.

More questions will be answered Thursday night, Aug. 13, when the water company holds an informational meeting as part of a settlement it reached with the DEP when the company was seeking a rate increase. Click here to see the instructions for Zooming into that meeting.

Selectboard members peppered the two state officials with questions. Board member Leigh Davis said she has heard from many constituents that they have had to buy expensive filtration systems and that some have had clothing and bedding ruined in washing machines using the water.

Others feel compelled to buy bottled water because they’re not comfortable drinking what comes out of their taps. Davis wanted to know if aggrieved ratepayers are entitled to a reduction in the amount they pay to the water company.

“I’m looking for relief we can bring to residents who are impacted by the water quality,” Davis explained.

But both Harrington and Jim Mercer, whose family has owned Housatonic Water Works since 1984, said any decisions on rates are made by the state Department of Public Utilities.

“That is something the DPU mandates, so we can’t randomly do rebates for discolored water,” Mercer explained. “As a rule, we can’t adjust rates outside of our rate structure.”

“We do not have the authority to adjudicate that,” Harrington confirmed.

“I would add that we inspect the systems regularly and whether a system is a privately owned community water system or publicly owned, they’re on the same schedule,” Doherty added. “A community system is inspected every three years.”

Selectboard member Kate Burke observed that the three-year interval “leaves a huge gap in time.” Harrington replied that DEP is constantly monitoring the system remotely, and “monitoring the data before us,” even when the department is not conducting an on-site inspection.

Burke wondered what prompted the DEP’s action during the unusually warm summer of two years ago. Harrington said that action was the result of complaints his department had received. During the months of July and August 2018, HWW customers “complained of extended periods of discolored waters and odors (‘pool-like’), followed by periods of ‘pond-like’ odors.”

On Aug. 10, 2018, the DEP issued a “unilateral administrative order” mandating that HWW improve its chlorination levels. The document ordered HWW to rectify its chlorine analyzer problem within 72 hours and to conduct tests and make other repairs within 21 days. Mercer disputed some of the data but agreed to comply.

The DPU approves or denies the rate increases of water companies. In 2015 HWW requested a 33.3% rate increase, which would have caused the bills of its average customers to rise by 34%. The town objected and filed a petition to the DPU. The negotiated settlement resulted, among other things, in an increase of slightly more than 30% over three years.

HWW has made upgrades over the years that have forced rate increases but Mercer has said that additional repairs would likely necessitate further rate increases that DPU would probably not approve.

Asked about the source of the current problem, Harrington acknowledged that the discoloration of the water is the result of “old iron pipes.”

The small company, which serves fewer than 900 customers in the Housatonic section of Great Barrington, has been the object of numerous complaints from ratepayers who have grown more and more agitated, both in Town Hall confrontations with officials and on social media. Others have complained of inadequate communication from the company about upcoming water main flushings that cause the discoloration. Housatonic Water Works has 17 miles of water mains and 55 fire hydrants.

Water service for much of the rest of the town is provided not by a private company but by the Great Barrington Fire District, a quasi-public entity with taxing authority that essentially functions as the town’s municipal water department.

At a July 27 meeting, town manager Mark Pruhenski presented the board with an executive summary outlining key issues and suggesting possible remedies, including attempting to purchase the company, or merging it with the fire district.

In the summer of 2018, the town hired an engineering firm to conduct a preliminary survey of the water systems in town. Last month, the board agreed to commence a Phase 2 study on HWW that will cost approximately $50,000.

Monday night, selectboard member Ed Abrahams made a motion to direct Pruhenski, himself a Housatonic resident, to draft a letter asking DPU “to work with HWW to offer a rate adjustment to customers impacted by the most recent water discoloration.” It passed unanimously.