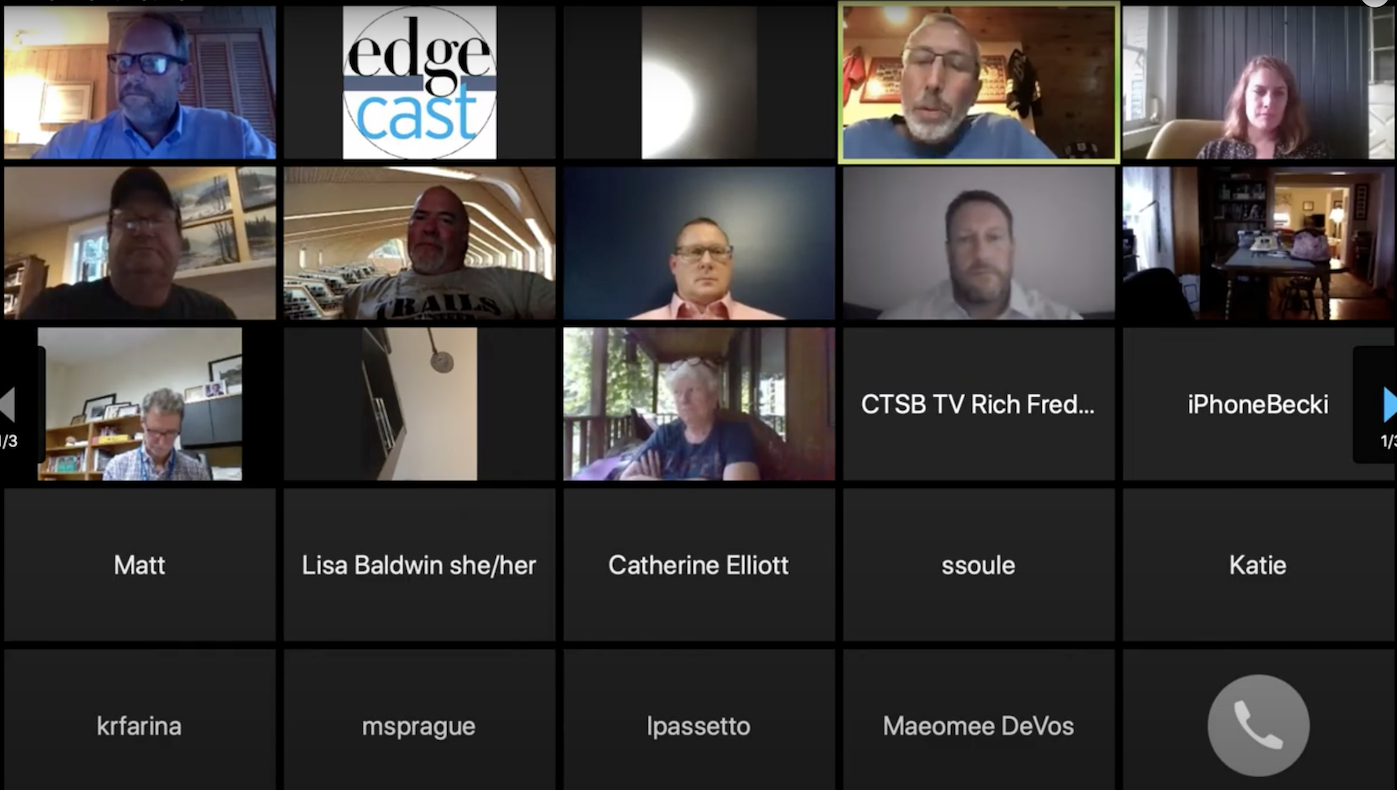 The Berkshire Hills Regional School Committee approved an arrangement last week that will allow some teachers to work from home for three weeks while the district is in in its remote-learning-only phase. Image: Zoom screengrab by Terry Cowgill

Great Barrington — The Berkshire Hills Regional School Committee is about to embark on an experiment with a lot of unknowns. Like thousands of school districts across the nation, Berkshire Hills reopened tentatively on Monday.

But for the first three weeks, students will not be in the classrooms. They’ll be engaging in remote online learning. The main question at the Sept. 10 school committee meeting seemed to be where the teachers were going to be.

Until Monday, Oct. 5, the school district will operate with a remote-only model out of an abundance of caution in the face of the COVID-10 pandemic. That leaves the question of where teachers must be in order to offer the remote instruction.

Superintendent Peter Dillon told the committee he thought it best if teachers teach remotely from their respective schools but that practical considerations might prevent some from doing so.

Dillon and the committee are in negotiations with the unions representing teachers and paraprofessionals about a variety of workplace issues related to the unusual reopening plan. He presented a pilot plan for the remote reopening that included an option for teachers to teach remotely from home if they are unable to teach on campus because of childcare needs or health considerations.

“I would like to allow a subset of staff who reached out to me to work from home as needed,” Dillon explained. “My assumption and expectation is [teachers] will work very hard and meet all their obligations. They’ll just be doing it in a different place. We’ll keep a careful eye on it, we’ll monitor people’s effectiveness, and after the three weeks, we’ll come back with a recommendation.”

Dillon emphasized that working face-to-face with colleagues and interacting with them was an important professional practice, but that some flexibility was called for because many faculty will be left without childcare options if their children cannot physically be in school. Dillon framed it as a “three-week experiment.”

In response to a question from school committee member Sean Stephen of Stockbridge, Dillon said there could be between 30 and 40 teachers who are left without childcare options, or who have documented health risks and have been advised by medical professionals to avoid the buildings for the time being.

“That’s my estimate based on a big staff survey I did a while ago, and it may not be that many people for each of the 15 days of the remote [learning],” Dillon said.

“For the people that are struggling with this, I’m confident they can meet their professional obligations and it does give them a little bit of wiggle room.”

Committee member Rich Dohoney of Great Barrington is an assistant district attorney in the Berkshire district attorney’s office. His job includes the direct supervision of more than 50 essential employees, many of whom worked remotely for weeks.

“Even [among] the most well-intentioned, diligent employees, when the reason for remote work was child care, there was a qualitative drop off,” Dohoney observed. “It’s a very challenging thing to do and … for the students’ sake, I hope it’s monitored closely.”

Nevertheless, Dohoney said Dillon was not proposing a long-term policy and that he trusted in the superintendent’s ability to implement it.

Berkshire Hills reopened Monday, Sept. 14, with a fully remote program. Then, on Monday, Oct. 5, the district is transitioning to a so-called “hybrid model” in which half the student population would be engaged in face-to-face learning on campus with teachers and staff on Mondays and Tuesdays, with the other half reporting for the same on Thursdays and Fridays. No students will be present on Wednesdays, when the custodial staff will perform a deep cleaning of the buildings. The date for a transition for full in-person learning has not been set.

Committee member Bill Fields of Great Barrington, a retired faculty member at Monument who taught history for 40 years, asked Dillon how teachers would be evaluated under this arrangement. Dillon replied that the subject is currently the subject of negotiations between the administration, the school committee and the Berkshire Hills Education Association, the labor union that represents the district’s teachers.

“My position is that it’s up to individual teachers to do what they feel is the best to deliver their curriculum,” Fields said. “The unintended consequences of that are if you require teachers to be in the building, you’re treating teachers like grade-school kids. The unintended message is teachers can’t be trusted. We have to have people looking over our shoulder to make sure we do the work. I’m not sure that’s the right message to send, but I understand where you’re coming from.”

“These teachers have been taught to teach in person; they’ve been taking most of their professional development face-to-face,” added board member Jason St. Peter of Stockbridge, an optometrist by training. “To me, it just doesn’t make sense that they would be able to teach at home as well as they would in school.” Still, St. Peter said he supported Dillon’s decision if the superintendent thought it would work.

“All things equal, I would prefer [it too] because it’s the first three weeks,” committee Chairman Steve Bannon said. “Unfortunately, at this point, all things aren’t equal, so the more people we have in the building, the better.”

The motion to approve the three-week pilot program passed 9-0.

The committee also discussed a shared-services agreement with the town of Richmond and agreed to extend it for one year. Four years ago, Berkshire Hills signed a pact with the Shaker Mountain School Union, which includes Richmond, Hancock and New Ashford, to allow Dillon to serve as Shaker Mountain’s superintendent while continuing to be employed in that capacity at Berkshire Hills.

But nearing the end of the multi-year pact, the Berkshire Hills School Committee told Dillon he should be the superintendent for Richmond only, and not Hancock and New Ashford.

In a separate negotiation, the school committee is engaged in talks with Richmond to join Berkshire Hills as a member town. Currently, the K-8 Richmond Consolidated School sends most of its graduates to Monument Mountain Regional High School through a tuition arrangement with Berkshire Hills.

Both Stephen and Dohoney said they felt Dillon was being stretched thin by the arrangement and that it was time to reassess the concept of shared services. There was widespread sentiment on the committee, however, for Richmond to join the district.

One of the reasons for the enthusiasm for Richmond joining the district is Berkshire Hills continues to pursue a reconstruction of its aging high school. Within the span of one year, a pair of $50 million-plus proposals failed when Great Barrington, by far the largest of the three towns in the district, failed to approve an override to Proposition 2½, a state statute that limits tax levy increases. In both cases, the Massachusetts School Building Authority would have paid for almost 41% of the cost, not counting incentives.

The MSBA offers several incentives to bump up its reimbursement rate for approved projects, but the largest (up to 6 additional percentage points) lies in the formation of a new school district, or adding a town to an existing district, as part of the building project. The topic might resonate with South County residents because, with declining enrollments, there have been committees formed to consider consolidations and mergers. In addition to a possible merger with Richmond, Berkshire Hills has been in serious talks with the Southern Berkshire Regional School District.

The motion to extend the shared-services agreement with Richmond passed 8-1, with Stephen dissenting.

The committee also unanimously approved a four-season plan for competitive athletics presented by athletics director Karl Zigmand. The plan is to offer two fall seasons: one actually in the fall and the other beginning in mid-March through the end of May. Boys and girls cross country teams would compete against other schools in the first fall season, along with a co-ed golf team. All other fall sports would be moved to the “Fall 2” season in the spring.

The winter season will include basketball, wrestling, alpine skiing and swimming, and will start on Nov. 30 and run through Feb. 21. The spring season starts May 3 and ends June 30. It will include baseball, softball, lacrosse, track and field, and tennis.

The committee also voted to waive competitive athletics user fees for the year.