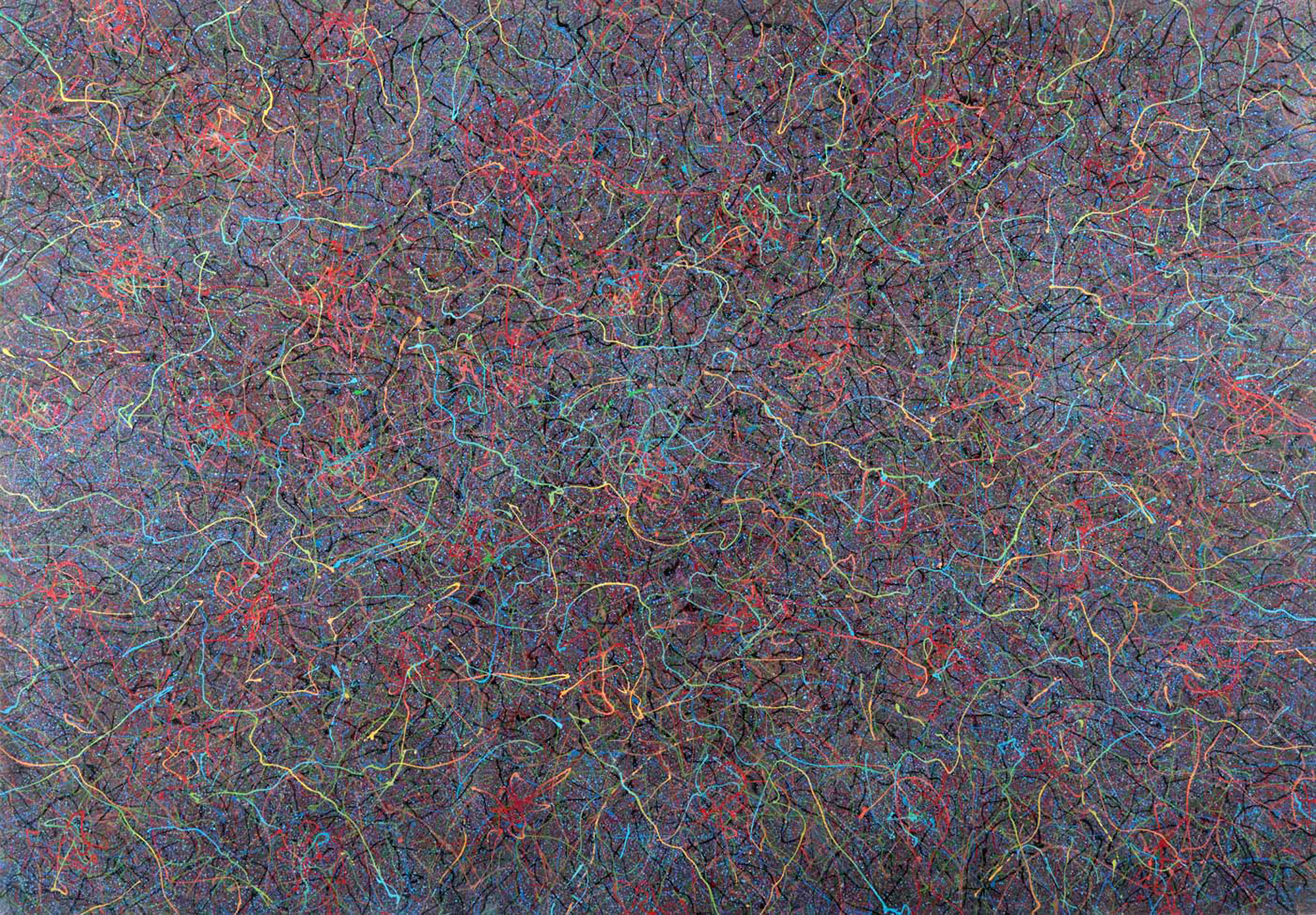 Rick Harlow, broadly categorized as a landscapist, is a fascinating artist residing in the Berkshires. His paintings have journeyed from mesmerizing mixtures of perceptual and epiphanic realities to his current fibrous abstractions of unpent energy. The Eclipse Mill Gallery in North Adams is now hosting a dozen works from the latter spectrum under the fitting title “Landscape of Energy.”

Co-produced by Harlow and Jesus Vio (the new gallery director), this exhibit of large and small paintings is handsomely presented and comfortably converses with the walls, fenestration and lighting of the space. For visitors only familiar with Harlow’s earlier production — kaleidoscopic dialogues between earthly landscapes and otherworldly visions—these new pieces will be a revelation.

Similarities with Jackson Pollock’s drip paintings are obvious, but these parallels have more to do with process than product. In both cases, enamel paints are strewn onto canvases lying rug-like on the floor. Tangled strings of pigment and a galaxy of flecks ride the surfaces. Linearity becomes synonymous with painterliness. Pollock’s works, however, are calligraphically louder, chromatically more dissonant and visually heavier.

Harlow’s spiritualism translates this frenetic vocabulary into a harmonious and universal message. His writhing webs evoke associations with roots and tendrils, nerves and veins. Conjoined in an inextricable union, nature and the human experience share a common space and energy. His paintings become visual metaphors for our communion with the planet and its all-encompassing life force.

Over the decades, Harlow has spent substantial time among the indigenous peoples of the Colombian Amazon. He has made it a life mission to learn and help preserve their ways, an encounter which has profoundly influenced his artistic vision. The physical and psychological immersion into the dense, teeming life of the rainforest thoroughly informs his artwork.

Vestigial allusions to landscape and nature are stronger in some paintings than in others. One striking example is “Santa Ana Winds.” A stratigraphy of paint spans the large canvas. Bold, flashing brushstrokes demarcate a horizon. Twisting trails of hot hues spawn at midplane, seeming to crackle of electricity. A quieter substratum emitting a low glow provides a visual anchor. Reverberating echoes of Mark Rothko and Pollock harmonize.

“Guardian Spirit” fascinates with its automatism — where an artist subconsciously creates imagery through chance. Here, two vertical lines roughly trace the sensuous contour of a standing female. In the tradition of Gustave Courbet’s “Origin of the World,” this apparition embodies the procreative energy of nature. Animated squiggles, like swimming sperm, circle around her in the swarming matrix of paint streams and splatters.

“Shadow Dance” has an alluring wall presence. An organic growth of flung paint frames the composition, which opens onto a central stage. There, painterly forms leap like flames in a rhythmic dance. In contrast to the sharp linearity of the surround, these passages are softly diffused, simulating an out-of-focus background and a shallow depth of field. The painting suggests a providential and privileged encounter.

Most of the exhibited works are examples of allover painting, where there is a lack of compositional focus—an approach popularized by Pollock. For Harlow, alloverness nicely fuses organic, psychological, and spiritual energy into one comprehensible statement.  In his pieces, however, a subtle centripetal flow often emerges out of the controlled chaos.

A major difference between Harlow’s technique and traditional drip painting is the use of glazes. He creates those chromatically-charged paint strings by painstakingly applying color over the flicked white lines. The white foundation produces luminous, iridescent hues, which he modulates through glazes. Harlow’s “drips,” then, swing from gesture to meticulous inpainting: the yin and the yang of process. “Progeny of Khaos” demonstrates the effectiveness of this method.

“Landscape of Energy” is on view at the Eclipse Mill Gallery located in the Eclipse Mill, 243 Union St., North Adams. Gallery hours are noon to 5 p.m. Tuesday through Sunday, The exhibit runs through Saturday, June 2. On Saturday, May 26, at 7 p.m., the jazz group Aluna will perform “Soundscape of Energy,” improvisational music dialoguing with Harlow’s paintings. The concert is free.