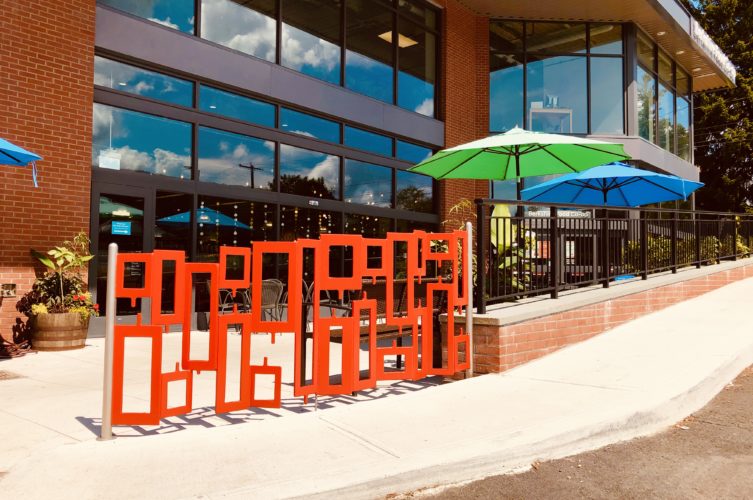 'Gateway,' a sculpture by Michael Thomas at the entrance to the Berkshire Food Co-op in Great Barrington, Mass.

Great Barrington – Patrons of the new Berkshire Food Co-op on Bridge Street have surely noticed the orange welded steel sculptural screen and railing installed this year along the steps to the Co-op’s patio and entrance. It is the first of five fabricated sculptures to be installed on the Co-op campus situated along the eastern façade of Powerhouse Square.

The screen, titled “Gateway,” is the work of sculptor – and filmmaker – Michael Thomas of Great Barrington and is the first work in the Art in Public Spaces initiative launched this summer by Thomas and fellow artist Peter Barrett, with the enthusiastic support of Co-op General Manager Troy Bond and gallery owner Lauren Clark. Eventually, the initiative will include 10 to 12 sculptures in locations throughout the town.

The management of the Powerhouse Square, the imposing 4-storey condominium complex on Bridge Street – a few feet from Main Street—approached Thomas with a proposal to “curate and produce a long-term sculpture exhibit and other incidental art for their corporate campus, in an effort to ‘humanize’ this landscape.” Thomas’s fabricated sculpture is the first of five such works to be installed on the Powerhouse campus.

The sculptures are part of a greater vision for the evolution of the Berkshire Co-op as a modern day “public square,” in the tradition of a “common,” as it’s traditionally called in New England towns – a public space that hosts community activities but more than that – an area that belongs to and serves the community at large.

“Public art adds enormous value to the culture, aesthetic and economic vitality of a community,” Thomas notes. “It is now a well-accepted principle of urban design that art in public spaces contributes to a community’s identity, fosters community pride and a sense of belonging.

“Public spaces provide opportunities for people to meet and be exposed to a variety of neighbors. These meetings often take place by chance, but they can also come through active organizing. The art of promoting constructive interaction among people in public spaces has been nearly forgotten in many communities.”

On a sunny October afternoon Bond is seated at the tables flanking the entrance to the Co-op, greeting customers as they arrived.

“I think of the Co-op as the heart of the community, connecting people in real time,” he said. “We now have 4,200 owners in our new site, up from 3,750. And 60 employees. The Co-op now has 14,000 square feet of floor space – double what we had before – and it’s an inviting destination. This is a much better space than we had. We have a larger kitchen for our café, we have more space to hold classes, and we’ve been able to program music performances for Saturdays on our patio.”

Bond pointed out that 30 percent of the all-organic products available in the Co-op are locally grown.

“We support the local families who are farming,” Bond said. “During the COVID pandemic it’s so important to eat as health food as possible.”

And he further observed that the Co-op is a community within itself.

“In the past few months we have gained 109 new member owners,” he explained. “It’s as if we’re a village – a New England village. Our owner members vote on matters that affect the direction of the Co-op.

“Our concept is we are a community of shared interests, and in this time of pandemic you can come still into the Co-op to experience a sense of normalcy and community. There’s a perception that the Co-op is more expensive but it’s not. We are not guided by a profit-first motivation. It’s about sharing. And by the way, we’re already talking about a second location, within a radius of a 45-minute drive, perhaps in Connecticut or in Hudson, New York.”

While we are talking Michael Thomas emerges from the Co-op, a cloth shopping bag jammed with groceries on his shoulder, and holding a cup of tea. He joins the conversation.

“I’m thinking that the Co-op has become a modern-day Public Square,” he said. “What’s exciting is how the Public Square and public art in that square converge and co-exist in the bigger landscape which is the town. These spaces, both physically and philosophically, can transform people’s attitudes and levels of involvement with their community and create a robust dialogue which leads inevitably to action and the betterment of the whole. Democracy is messy.”