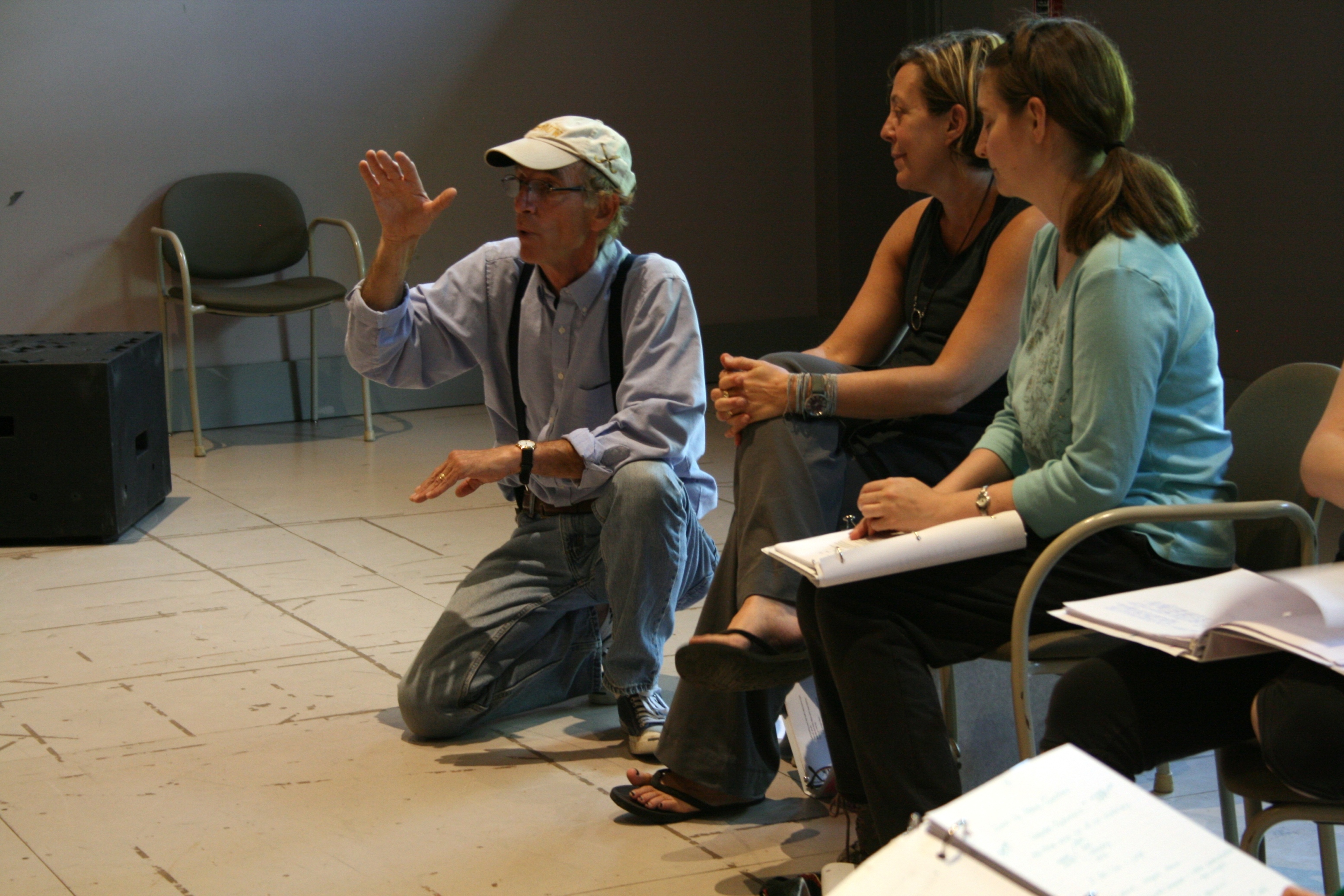 Lenox — “We don’t audition people for roles in our programs,” says Shakespeare & Company Education Director Kevin Coleman. “We play theatre games with them. If we’re looking for Ophelia, for example, instead of casting someone who looks the way we imagine Ophelia looks, we choose several interesting people from what they do in these games, and each one gets to play the role. If we cast three or four Ophelias, we get three or four individual kinds of performances. Everyone counts. And our method of directing is to allow each actor [with guidance] to find his or her own interpretation, not to insist on ours.” There is no emphasis in workshops or rehearsals on what the text “should” mean — because Shakespeare’s work encompasses every aspect of being human.

It’s a Monday morning, and we’re sitting in the sun-slashed conference room in the administration building at Shakespeare & Company in Lenox, Massachusetts. Years ago, the man sitting opposite me was quoted in a Harvard Graduate School of Education document as saying, “Shakespeare wrote plays; actors were called players; they played in a playhouse. Play is meeting him on his terms. He wrote this stuff to be played.” I envy his students, learning in the atmosphere of this artist/teacher’s understanding that play is the child’s work, and the quality of play informs the quality of life.

Coleman tells me that when he was a child, he milked cows before leaving for school in the morning, but at the age of thirteen, he was sent to a boys-only Jesuit Academy where he read his first play, a one act by Eugene O’Neill. He still seems struck by the power of those words on his imagination. He says he realized that theatre could be exciting and important when he and a handful of friends created and performed their own play at the school, and not only the entire student body turned out, but a bus pulled up with pupils from a local girls’ school as well. Coleman says his only aptitudes in those years were for baseball and theatre, and although both taught him to value high expectations, self-discipline, and playing by the rules, he spent a great deal of time avoiding “dry” academics and what he considered to be unnecessary, spirit-killing rules.

As an undergraduate at St. Louis University, and later as a Jesuit Scholastic, he had a series of adventures that included being sent to instruct Native Americans at the Rosebud and Pine Ridge Reservations after consistently breaking SLU regulations. At St. Louis, Coleman met and collaborated with Dennis Krausnick, who was several years older, a Jesuit at the time, and a fellow-actor, director, and theatre lover. He followed Krausnick to graduate school at NYU. While there, he met the Polish theatre genius Jerzy Grotowski, and studied with internationally acclaimed Grotowski actor/teacher Ryszard Cieslak, whose videos showing the centrality of the body to acting are available and still revolutionary on YouTube today.

Coleman became one of the original members of Shakespeare & Company alongside Founder/Artistic Director Tina Packer (Royal Academy of Dramatic Art graduate, former member of the Royal Shakespeare Company, actor, director, and Shakespeare expert), Krausnick (no longer a Jesuit but still an actor, director, and teacher), and Kristin Linklater (whose techniques for freeing the human voice are now world renowned.) They were joined by students Tony Simotes and Rocco Sisto, playing in the yeasty atmosphere of New York City theatre in the 1960’s and ‘70’s. In 1978, the group moved to The Mount, Edith Wharton’s elegant house in Lenox (then in pre-restoration disrepair), where with a growing number of other players, they lived and worked, surviving on sparse meals, with leaky walls and ceilings, and occasional ghost-sightings. All the while they produced better and better Shakespearean plays on a shoestring, developing the theatrical and educational vision that distinguishes the company today.

“Creativity is our birthright. All art gives us insights into ourselves, keys to our own creativity, and theatre adds a natural experience of cooperation. Shakespeare left us the most dramatic and illuminating material to feed that creativity. We participate in it not to ‘get it right,’ but to bring the work and ourselves alive.”

For years, Kevin Coleman has been one of Shakespeare & Company’s master teachers, specializing in text analysis, acting, stage combat and clown. As Director of Education, he watches over an impressive range of programs that include Riotous Youth, two week summer sessions for 7-10, 10-12 and 13-14 year olds, Shakespeare & Young Company, an intensive program for 16-20 year olds, and Shakespeare and the Courts, where juvenile offenders in Berkshire County work with Shakespeare & Company artists, participating in classes and performing their own production of a play each year as an obligation to the court. In addition, he oversees the Fall Festival of Shakespeare where students from Massachusetts and New York high schools present full productions of Shakespeare in their own schools, and transfer them to the main stage of the Tina Packer Playhouse.

Since 1978, Coleman has also directed most of the company’s New England touring productions, and he oversees the Directors-in-Residency Program, which reaches students from elementary through college level by teaching their teachers, extending the company’s influence around the country and throughout the world. Programs like these come from serious reflection, hard work, and a conviction that the design of the mind runs to the enrichment of the imagination. “Education is not like filling a pail; it’s like lighting a fire,” he says. Like Plutarch and Yeats, he believes: “Education should not be the mere transfer of information to the frontal lobe, insisting or even implying the suppression of the body. The object of education is self-knowledge.”

“Stand and Unfold Yourself” is the title of a monograph produced by Harvard University’s Graduate School of Education in 1998 on completion of a two-year investigation of Shakespeare & Company’s workshops, rehearsals and performances called Project Zero. “Stand and unfold yourself” is a line in the opening scene of “Hamlet” which the monograph’s author, Steve Siedel, said represents what the company demands of its students and teachers — physically, intellectually, and psychologically: they must become present and visible on every level. The Project Zero study was underwritten by the MacArthur Foundation and the GE Foundation, and Shakespeare & Company was recognized by The President’s Council on the Arts and Humanities as a Champion of Change in Arts in Learning.

The urgency of this eight-year-old report endorsing the company’s active, inclusive, word-based methods is that our currently pervasive American system moves farther and farther daily from John Dewey’s cooperative, project-based educational ideal, and Shakespeare & Company’s example counteracts that. Sitting here, Coleman decries banning recess as a first step toward trapping children and adults for hours at a time in front of desks and computers. Their ultimate separation from nature and other people comes when they become mesmerized by their cellphone screens in their “free time.”

Beginning in 1988, Coleman has been Project Director for the National Institute on Teaching Shakespeare, a program funded by the National Endowment for the Humanities, where high school teachers from across the nation train with Shakespeare & Company master teachers and internationally recognized Shakespeare scholars in a month-long intensive workshop. As he develops and maintains his work across education programs, concentrating on the text, he also keeps in mind Grotowski and Cieslak’s dictum that “your whole body is your instrument.”

During this time, Shakespeare & Company has received a Commonwealth Award, the highest honor given by the Commonwealth of Massachusetts for contributions to quality of life. Beyond company-based achievements, for nearly twenty years, Coleman has served as Theatre Director at the Austen Riggs Center, a psychiatric hospital in Stockbridge where he oversees two major productions annually, combining patients and professional actors. In 2006, he was honored at the White House and received the Coming Up Taller Award for the Shakespeare in the Courts Program he created in collaboration with Judge Paul E. Perachi. In 2009, he received the Distinguished Theatre Artist Award from the Massachusetts Alliance for Arts Education.

And in June of this year, Kevin Coleman was honored as one of only two finalists for the Excellence in Theatre Education Award at the Tonys. As we part for the day, he calls after me as I push open the glass door to Shakespeare & Company’s green campus on Walker Street. “Kids don’t need ‘Sponge Bob’,” he says passionately. “They deserve fairy tales, real fairy tales — tales that reach them on a deep level. And Shakespeare!”