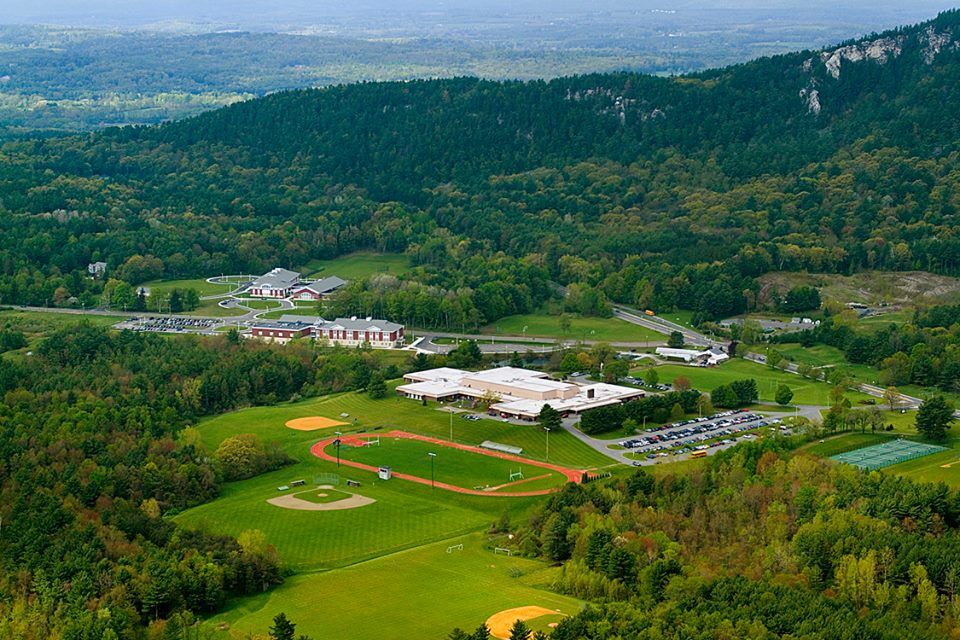 Officials at the Berkshire Hills Regional School District are lukewarm to President Trump's idea of arming teachers to stave off school shootings.

South Berkshire County — In the aftermath of the mass murder of 17 students in a Florida high school earlier this month, President Donald Trump channeled the National Rifle Association when he floated the idea of voluntarily giving guns to firearms-trained teachers in order “to harden our schools”–and paying bonuses to those who volunteer for the privilege.

Most teachers have resisted the proposal, as have the labor unions that represent them. As far back as 2013, a month after the massacre of 26 children and educators at Sandy Hook Elementary School in Connecticut, a survey by the National Education Association found that only 22 percent of its members favored a proposal to train and arm school employees.

Other studies indicate that many law enforcement professionals oppose the idea as well. No less than Republican Gov. Charlie Baker broke with Trump on the issue, opining that, “Police officers are one thing, but teachers should be teaching.”

And if an unscientific Edge survey is any indication, southern Berkshire County school teachers won’t be packing heat anytime soon.

“The president’s proposal is neither tied to research nor well articulated,” said Peter Dillon, superintendent of the Berkshire Hills Regional School District. “I think the best way to ensure safety is around building relationships and making sure kids are known and connected to multiple adults.”

Dillon, Berkshire Hills’ superintendent of schools since 2009, previously worked as policy director for the New York City Board of Education and headed a laboratory school in East Harlem. He added that “drills and working closely with local law enforcement are important, too.”

“The issue of whether to arm or not arm teachers in schools is not where I believe we should be focusing our energy right now,” Regulbuto told the Edge.

Regulbuto said she has recommended to the Southern Berkshire Regional School Committee, in partnership with local law enforcement, to concentrate the district’s efforts “on reviewing and enhancing our safety and security protocols.” In addition, Regulbuto wants to review the security needs of the physical plant and to suggest potential budget allocations in response.

Regulbuto echoed Dillon’s comments about connecting students with adult role models at school. She wants to “embed social and emotional curriculum where students can identify with at least one member of the school community” in order “to feel connected and safe.” She also would like to see more professional development and to support additional training for all the district’s stakeholders.

For his part, Southern Berkshire Regional School Committee Chairman Carl Stewart of Alford told the Edge he would strongly resist any effort to arm teachers in his district.

“I think that the notion of having armed teachers is one of the worst ideas ever,” Stewart said. “If Southern Berkshire opted for this approach, I’d resign from the school committee.”

That said, Stewart added emphatically, “But I can’t imagine that either the school committee or the superintendent would think that arming teachers was a good idea.”

Of the new school resource officer Zucco, Stewart said, “I’ve met her and I think she will be an excellent addition to the staff. She clearly understands the primary reasons that we want someone with her training.”

Asked if he liked the idea of arming teachers and whether he would recommend it to his school committee, Lee Public Schools Superintendent Jake Eberwein replied in an email, “I don’t like the idea, have not, and would not recommend.”

Eberwein added that the Lee schools do not have an SRO, “although we have a fantastic relationship with the Lee PD and they are often visible on/around campus.”

Berkshire Hills Regional School Committee member Bill Fields of Great Barrington suggested, at the end of a school committee budget meeting last week, that he would like to look into hiring an SRO for the district.

“With this huge coverage of this shooting in Florida, I think it’s time,” said Fields, who who taught social studies at Monument Mountain Regional High School for 40 years before retiring in 2009.

“And I never thought I’d say it because the last time the school committee discussed at length a school resource officer, it didn’t go over well and I was one of those people who did not like that idea.”

Steve Bannon, who has chaired the Berkshire Hills Regional School Committee for almost 20 years, said he would not speak for the committee, but he would oppose any initiative to arm teachers.

“I just don’t think it’s a great idea,” Bannon said in an interview. ‘We hire and pay our teachers to teach, not to carry guns.”

Bannon recalled that the matter has come up twice during his time on the committee, most recently in 2013, when a group approached the school committee inquiring about an SRO and others expressed strong disapproval because they did not want anyone walking around the school with a gun.

“So how do you think those folks would feel about 30 people walking around the school with guns?” Bannon asked rhetorically.

Some have also wondered about the potentially expensive liability insurance policies school districts would have to purchase in order to protect themselves against lawsuits in the event of firearms-related accidents that result in death or injury.

Only a few months after the Sandy Hook massacre, then-Republican Kansas Gov. Sam Brownback signed a measure permitting school districts the option of allowing teachers, administrators and other school employees with concealed-carry permits to carry their guns into schools.

“I think arming teachers is really, really bad idea,” Lee said. “The suggestion shows a total lack of understanding and under-appreciation of who teachers are and the work they do on a daily basis.”

The Lenox Public Schools do have an SRO: Lenox police officer William Colvin, who has served in that role for roughly 17 years.

Lee added that, “Only one group would benefit from implementation of such a practice: gun manufacturers, who would enjoy exploding profits from tens of thousands of new educator-customers. Their weapons would likely be purchased by school districts at public expense.”

State Rep. William “Smitty” Pignatelli, D-Lenox, weighed in with a tweet last week that teachers should be armed “with tools for learning” and that Congress isn’t doing its job to combat gun violence: 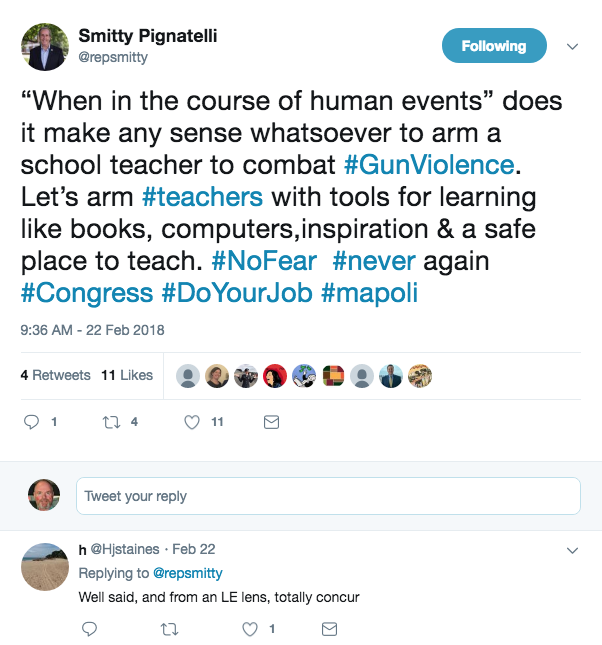 Advocates insist arming teachers would make schools less attractive targets for killers. NRA CEO Wayne LaPierre told attendees at a CPAC conference last week that: “We must immediately harden our schools. Every day, young children are being dropped off at schools that are virtually wide open, soft targets for anyone bent on mass murder.”

Bannon said that, at this Thursday’s Berkshire Hills Regional School Committee meeting (March 1), the committee will discuss school safety – first in executive session and then in open session. There will also be a public hearing on the proposed FY19 school district budget.

Teachers and other administrators contacted by the Edge for this story referred requests for comment to their superintendents or school committees.