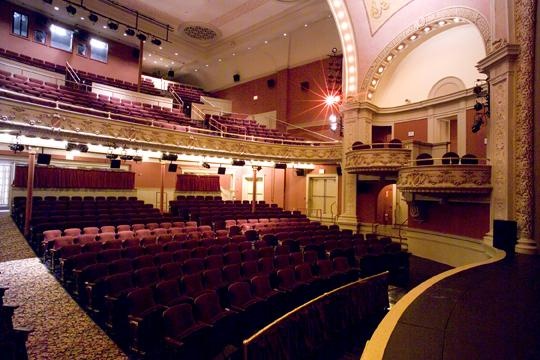 The 112-year-old Mahaiwe Theatre in Great Barrington, restored to its former condition, by architect Hugh Hardy. The complex is now called the Mahaiwe Performing Arts Center.

Architect Hugh Hardy, who restored the Mahaiwe Theatre, dies at 84 in Manhattan

The architect Hugh Hardy died March 17, 2017. He was 84. Although he never appeared as an actor or singer, he had a lasting impact on theaters in New York City including Radio City Music Hall, New Victory Theatre and Theater for a New Audience, renovations of which he took a strong hand. He also brought a fresh breath to Great Barrington’s small-town venue in a $9 million restoration in 2003-2006.

The 1905 Mahaiwe Theatre, one of the oldest surviving and still active theaters in the country, is on the National Register of Historic Places.

How did Hardy become involved? 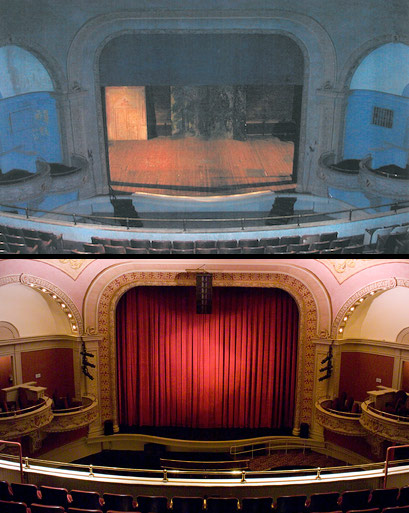 The Mahaiwe proscenium before and afater the renovation led by Hugh Hardy.

Fifteen-year-old Berkshire Opera Company acquired the Mahaiwe Theater for $410,000 in September 2000. Its director, Sanford H. Fisher, announced an ambitious $10 million campaign to restore the venue and turn it into a performing arts center. He engaged Hardy, then with the New York architectural firm Hardy Holzman Pfeiffer Associates, to direct refurbishment.

Hardy recognized the theater as a challenge: “The hard part is to get all the kinds of facilities you need for an opera company…,” he told The Berkshire Eagle in February 2001. “There’s no lobby, no back stage, no rehearsal space, no handicapped access, no costume place, and it all has to be provided.

“The Mahaiwe was a state-of-the-art theater when built,” Hardy said. “Its use of electricity (Great Barrington was a leader in the use of electricity in public places), sophisticated heating and ventilation systems and superb configuration made it a first-class performing hall almost one hundred years ago. The problem for us now is its construction. Although solid in appearance, it is a wooden structure covered in plaster and insubstantial by the standards of contemporary building codes.” 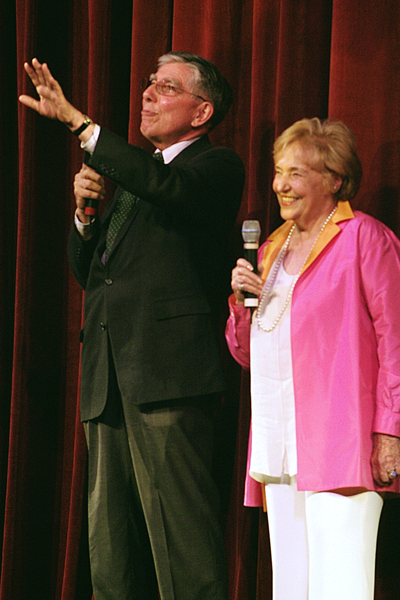 Hugh Hardy and Mahaiwe Performing Arts Center co-founder Lola Jaffe at celebration of the re-opening of the theatre.

Berkshire Opera was unable to follow through on its ambitious plans, but Mahaiwe Performing Arts Center, a nonprofit formed in 2002, assumed the task of refurbishing the French Renaissance Revival-style building for the 21st century. Lola Jaffe and an energetic board made sure Hardy was the architect.

John H.C. Church, 35, treasurer and general manager of Monument Mills in Housatonic, clerk of Richmond Iron Works, treasurer of Stanley Instrument Co. and a director of both the National Mahaiwe Bank and Great Barrington Savings Bank — not to mention an ardent golfer and president of the Wyantenuck Country Club for a quarter century beginning in 1900 — was the front man for the business combine that had originally built the theater. He and the Mahaiwe Bank had actively financed several reconstructions following fires and deserve credit for shaping downtown’s appealing visage. Church held a two-fifths interest in the new block, as did Frank Curtiss of Sheffield, president of the Sixth Avenue Line street railway in New York City, and his son Roy Curtiss. Attorney, insurance agent and Monument Mills vice-president Frank H. Wright held the last fifth share.

Church had studied architecture at Massachusetts Institute of Technology. He had an artist’s eye, and knew that to make an impact on the Great Barrington street corner he needed a distinctive building design.

He turned to the county’s preeminent architect.

Joseph McArthur Vance, 37, had set up his drawing table in Pittsfield in 1894 in order to oversee construction of the Berkshire County Savings Bank building at Park Square. The highly visible structure brought him future commissions ranging from the sprawling 250-room Aspinwall Hotel in Lenox and the soaring Bascom Lodge atop Mount Greylock to Great Barrington’s anchor block at the corner of Main and Bridge Streets. But the selling point for Vance’s new commission for the Mahaiwe syndicate was certainly his classic Colonial Theater, built in Pittsfield for the Sullivan brothers in 1903. Time has proven the Colonial as durable as its sister Mahaiwe. 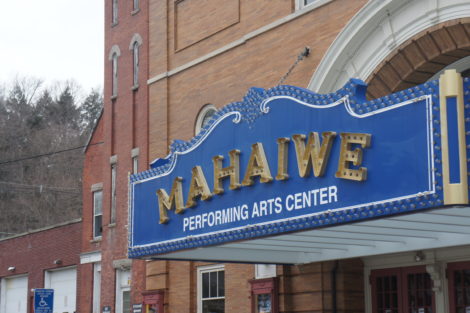 The Mahaiwe Theater impressed all who entered its doors. The stage was 31 feet between tormentors, 26 feet high and 67.5 feet wide — wider than the Colonial’s, though that theater sat 250 more people than the Mahaiwe’s 950.

The town had a real theater at last.

Now to fill it with quality entertainment.

The Mahaiwe opened as a legitimate theater, offering road shows and locally produced musicals and plays, recitations and travelogues. Between the wars, it had little choice but to book traveling vaudeville acts and show films. Movies became so important, a marquee was affixed inelegantly to the front in the 1930s. Competition from drive-in theaters, television, pre-recorded videos and other entertainment sapped the Mahaiwe’s audiences, though longtime manager Albert M. Schwartz, a born showman, used annual old-film festivals and special restaurant dinner packages to hold onto audiences during the Interstate Theater days.

When redemption was in the offing, a better architect couldn’t be imagined than Hugh Hardy. Aside from his reputation, his family had owned a farm on Bull Hill Road between Rannapo Road and Silver Street for decades. He had attended movies at the Mahaiwe during summers. 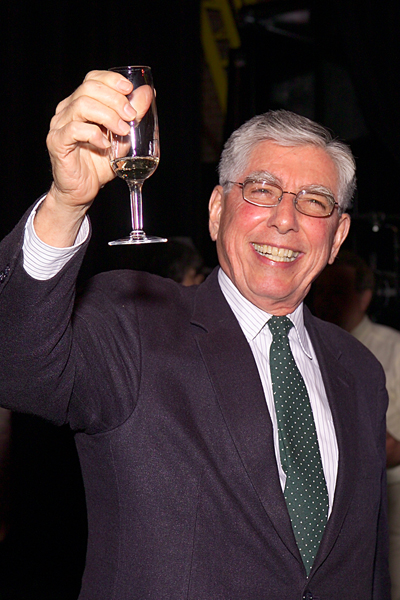 Hugh Gelston Hardy, saluting the completion of the Mahaiwe Theatre.

Hugh Gelston Hardy was born July 26, 1932, in Majorca, Spain, to Gelston Hardy (1901-1986) and the former Barbara Bonestell Walton. His father, who worked for the Young & Rubicam advertising agency, had traveled to Spain to write a novel. The family soon returned to New York, dividing their time between Manhattan and Irvington-on-Hudson. After Gelston Hardy’s second marriage, to Madelyn Wood, the family lived in Cromwell, Conn.

The Berkshire Eagle kept tabs on the family, noting in its Sept. 16, 1947, issue: “Hugh Hardy, son of Mr. and Mrs. Gelston Hardy of Indian Rock farm, is entering Deerfield Academy this week.”

Gelston Hardy in 1959 was vice president of Ashley House Inc., which acquired and maintained 1735 Col. Ashley house now entrusted to The Trustees of Reservations.

After serving in the U.S. Army and obtaining degrees from Princeton University, Hugh Hardy set about establishing his reputation. Along the way, he designed the conversion of the big red barn that became an arts center at Simon’s Rock Early College in Great Barrington in 1975. The same year, he had a summer cottage built in Ashley Falls by Gilligan Brothers.

Thanks to this imaginative and talented architect, audiences at the Mahaiwe Performing Arts Center can enjoy music and dance performances, lectures, films and other programs in an 11-decades-old setting the way they were meant to.