Some years ago, before the cell-phone era entered our lives, I had the privilege of producing a popular PBS poetry performance series called Anyone for Tennyson? It featured four young actors of the First Poetry Quartet as well as a host of guest stars. Programs were taped before studio audiences but also on locations ranging from the Lake District in England to the Black Hills of South Dakota and the pueblos of New Mexico. Over three years, the series presented performances of more than 700 poems by more than 300 poets.

The series showed that poetry could answer every human emotion and at the same time be beautifully rendered with heightened language and striking imagery. In short, poetry captures our attention and stirs our spirit. It enlightens, and it entertains. Today we need it more than ever.

So in addition to a federal Paycheck Protection Program, let’s consider a Berkshire Poetry Protection Program that would offer cultural affirmation, a necessary degree of solace and uplift, and overall, a wealth of joy and pleasure in troubled times. Accordingly, this space will offer a twice-a-month column utilizing the extensive archives of the original Anyone for Tennyson? series plus entries from the poetry of today. Subjects might be a theme (Poems of the Sea, Voices from the South, Poets and Dreams) or be devoted to a single poet or school of poets (Walt Whitman and the Civil War, the Lowells of Massachusetts, A Tribute to Anonymous). Importantly, each column will include a video performance.

Occasionally we may also explore the more curious characteristics of poetry, such as a recent request from a grandson who wanted to know which were the shortest and longest poems in the English language. Sounds like a good place to start our venture.

The shortest poem was written by that pugilistic poet, Muhammad Ali. It happened that Ali was addressing a senior class at Harvard with author/humorist George Plimpton by his side. A question came up about the shortest poem and George declared it to be a verse by Strickland Gillilan (1869-1954) called “Lines on the Antiquity of Microbes.” It goes:

Ali listened and then said, “I’ve got one,” and declared:

As for length, forgive me and with tongue only slightly in cheek, here is my candidate for the world’s longest poem, “Midsummer Melancholy” by Margaret Fishback (1900-1985).

Commencing next Sunday, we hope you’ll join us at Anyone for Tennyson?, and here is Vincent Price to endorse our invitation with words from a poem called “The Menu” by Thomas Bailey Aldrich (1836-1907). It’s an invitation to dinner and pleases us because it makes a point of including Tennyson in the guest list. Vincent Price, apart from his spine-chilling films, was an elegant and well-respected author of gourmet cook books, a calling he came by honestly since his grandfather made a small fortune in tartar-based baking powder. 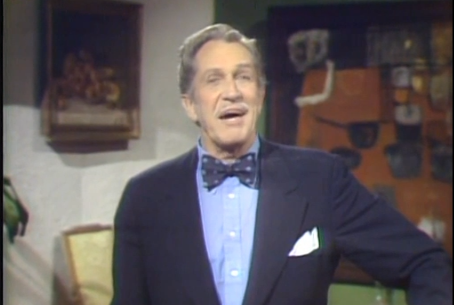 Click this link to watch Vincent Price recite “The Menu.”