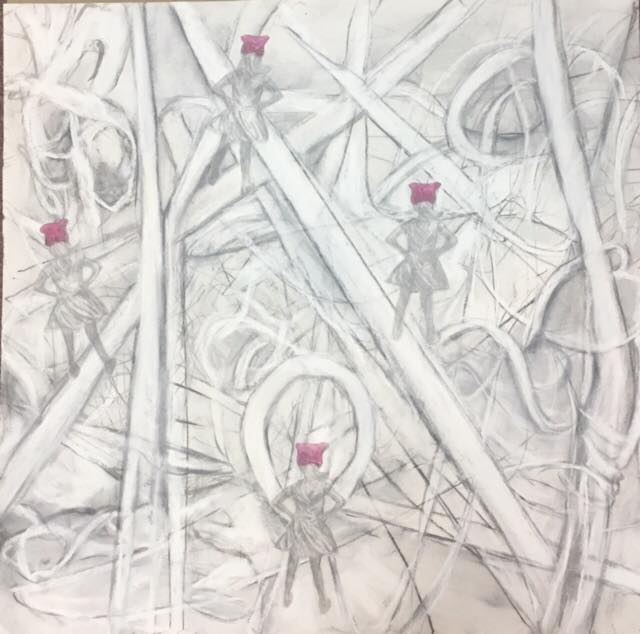 'fearless girls face down the matrix' by Caroline Kelley will be featured in Berkshire Nasty Women's art exhibition at the Colonial Theatre in Pittsfield beginning Thursday, May 4 (see item below).

‘Antisemitism and Islamophobia: Exploring the Roots of Prejudice’ community conversation

Pittsfield — The Pittsfield Human Rights Commission and Berkshire Interfaith Organizing will present a panel discussion titled “Antisemitism and Islamophobia: Exploring the Roots of Prejudice” on Sunday, May 7, from 2 to 4 p.m. at the Berkshire Museum. The panel will include Rabeh Elleithy, a member of the United American Muslim Association of the Berkshires; Rev. Joel Huntington, pastor of the South Congregational Church; Rabbi David Weiner, the spiritual leader of Congregation Knesset Israel; and Deepika Shukla, assistant United States attorney for the district of Massachusetts.

Elleithy was born in Cairo, Egypt, and has been living in the U.S. for 27 years. He is an engineer with a Ph.D. from Case Western Reserve University in Cleveland and has been involved with UAMAB for over two years, striving to teach the concepts of Islam to Muslims and non-Muslims of all ages. He and his wife live in Lenox and have two children currently studying at Virginia Tech.

Huntington was ordained into the United Church of Christ in 1982 and has served South Church since 1989. He views the life of faith as a journey enabling people to overcome barriers and deepen the vision of the beloved community. He believes interfaith conversations are a crucial way to shine such light and to enlarge the embrace of understanding, respect and hope for the divided world.

Weiner has served as the spiritual leader of Knesset Israel in Pittsfield since 2009. Born in Worcester, he grew up in the Midwest and attended Washington University in St. Louis, the Hebrew University of Jerusalem and the Jewish Theological Seminary in New York City. He and his family lived in Jacksonville, Florida, for three years before finding their way to the Berkshires.

Shukla prosecutes federal criminal cases involving fraud, public corruption, gun and drug crimes, terrorism and civil rights crimes in Springfield. Formerly she was a staff attorney at the Connecticut Fair Housing Center, a litigator at a small civil rights firm and an associate at a large law firm in New York.

The event is free and open to the public. For more information, contact Drew Herzig at drewherzig@yahoo.com.

Pittsfield — Berkshire Nasty Women will hold an opening reception for its art exhibition and fundraiser Friday, May 5, from 7 to 9 p.m. at the Colonial Theatre. The exhibition will be on view Thursday, May 4, through Sunday, May 14, and will feature the work of national and local artists. Berkshire Nasty Women will donate 100 percent of the proceeds raised from the show to either the American Civil Liberties Union or the League of Women Voters, depending on art buyers’ individual choices. The event is being held in solidarity with the national Nasty Women art movement, a global art movement that demonstrates strength and unity among artists in the face of threats against equality. For more information, contact berkshirenastywomenart@gmail.com.