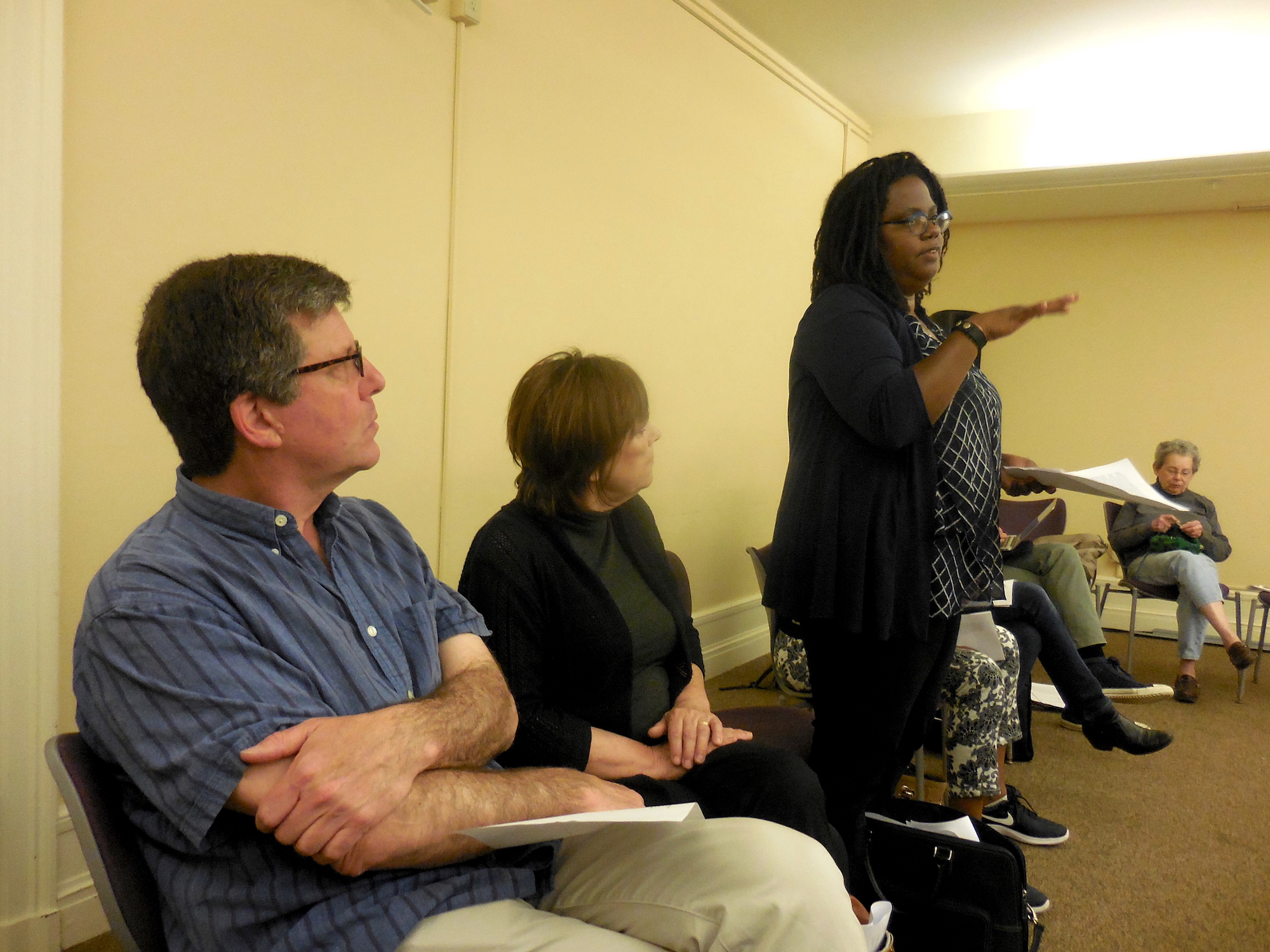 Gwendolyn Hampton VanSant, who has been spearheading the effort locally to honor W.E.B. Du Bois on the 150th anniversary of his birth, explains to the library trustees the effort to rename Monument Valley Regional Middle School after the legendary scholar and civil rights leader. To her right are Selectman Ed Abrahams and Freke Vuijst. Photo: Terry Cowgill

Great Barrington — Another effort is in the works to rename one of the Berkshire Hills Regional School District’s three schools after Great Barrington’s most famous native son.

Supporters of scholar and civil rights legend W.E.B. Du Bois are gearing up for an effort to rename Monument Valley Regional Middle School in memory of Du Bois, whose 150th birth anniversary is being celebrated by the town of Great Barrington this year.

Gwendolyn Hampton VanSant of Multicultural BRIDGE and Randy Weinstein of the Du Bois Center at Great Barrington have been spearheading this year’s birthday celebration and education effort on behalf of Du Bois, whom they consider to be misunderstood by many members of the public.

“We wanted to do three things: celebrate his birthday, educate the public and figure out the legacy project,” VanSant said during a May 16 meeting of the trustees of the Great Barrington libraries.

See video below of Gwendolyn Hampton VanSant of Multicultural BRIDGE. Fast forward to 6:00 to see her announcement of the proposed renaming of Monument Valley Regional Middle School after Du Bois:

One of those legacy projects is already in the works: a downtown statue honoring Du Bois. That was the brainchild of Danny Klein and Freke Vuijst, who presented the idea to the trustees last week. Click here to read a story on their idea and look for a story later this week on the latest developments.

They say the road to hell is paved with good intentions and that could be the case here. Du Bois and his legacy have had a long and complicated relationship with the town and with the overwhelmingly white Berkshires. Some are wary of his anti-capitalist views and his embrace of communism late in life.

The last time an attempt was made to name a school after Du Bois, it started a controversy that divided the community. In an incident that garnered much publicity, the Berkshire Hills Regional School Committee in 2004 declined to name after Du Bois one of the two new schools it had just built. The building was named instead after a small watercourse, the Muddy Brook, that runs behind the building on Monument Valley Road.

The decision sparked outrage in the community, with one school committee member calling it a “media circus.” But, as the Du Bois Center’s website makes clear: “There are at least five public schools named for Du Bois in multiple states, including California, Maryland, New York, North Carolina, and Ohio. His face and name twice appeared on United States postage stamps.”

And decades earlier, spurred by the assassination of Martin Luther King Jr. and Du Bois’ 100th birthday, a committee redoubled its efforts in 1968 to create a Du Bois memorial at the Du Bois Boyhood Homesite at what is now known as the W.E.B. Du Bois National Historic Site in Great Barrington. The effort, ultimately successful, nonetheless divided the public and sparked great controversy in the news media, both locally and nationally.

In an interview, Weinstein said he thinks the atmosphere in Great Barrington has changed since the Muddy Brook incident and that Du Bois is better understood in a more complete historical context.

“We were up at the plate once and we struck out,” Weinstein said. “I’m convinced things have changed or I wouldn’t be involved in this effort.”

Weinstein pointed to the many events over the last several months to celebrate Du Bois’ 150th birthday.

“We had maybe 15 different events and there was lots of healthy dialogue,” Weinstein recalled. “But at the end of the day people looked at each each other, shook hands and accepted each other’s views.”

As far as Weinstein is concerned, the historical zeitgeist has changed and Du Bois’ “relationship with Great Barrington has always been very direct.” Du Bois was born in Great Barrington, attended schools here and found the community to be integrated and relatively tolerant.

“The context has certainly changed,” Weinstein said. “Du Bois is a shining example in these dark days.”

“We will continue to educate folks because there’s still some concerns about Du Bois’ politics, especially at the end of his life,” added VanSant. “He’s heralded as one of the biggest thought leaders and civil rights leaders nationally and internationally. He’s in all libraries and all the schools.”

VanSant said she and her committee have been talking to town clerks in an effort to work out the logistics of getting a resolution on the ballot for the November elections in the three member towns in the Berkshire Hills Regional School District: Great Barrington, Stockbridge and West Stockbridge.

Great Barrington’s Steve Bannon chairs the school committee has done so since 1999, so he was an eyewitness to the tumult that ensued the last time naming a school after Du Bois was proposed. In a brief interview, Bannon did not want to revisit the issue, nor did he want to speculate on what might happen this time around.

The vote and the possible renaming would presumably come as the district gears up for another try at rebuilding the aging Monument Mountain Regional High School.

This will be the third try since 2013 to get state aid for the ailing high school. Within the span of 12 months, a pair of $50 million-plus proposals failed when Great Barrington, by far the largest of the three towns in the district, failed to approve an override to Proposition 2½, a state statute that limits tax levy increases.

If the third try is to succeed, it will surely need all the good will it can muster from Great Barrington taxpayers. If the renaming of the school generates significant ill will, then a new capital project for the high school could be a steep climb.

The controversy over Du Bois reared its head recently during a candidate forum at which James Clark, who was running for selectman, responded to a question about what the town could do to further honor Du Bois. Clark said the legend of Du Bois was “revisionist history.” He branded Du Bois a communist and said he was associated with Adolf Hitler, though he was unable to source the latter accusation. Clark wound up receiving the fewest votes of the six candidates running for selectboard.

Asked why Monument Valley Regional Middle School was selected for the renaming rather than a second try at Muddy Brook Elementary, VanSant said a lot of it had to do with the fact that Du Bois’ life is actually taught in the middle school curriculum. In addition, the current name is confusing.

“Everyone calls it Monument and they get it confused [with the high school],” VanSant said.

And Weinstein added that “the thought of changing the name of the high school is just preposterous because it’s been there for so long.”

VanSant said she and her committee are talking to town clerks in the three towns who will advise her on how to get the resolution on the ballot. VanSant has been told it might be complicated because it’s also a federal election.

“Once we figure that out, we will craft a statement and get it on the ballot and we’re looking for a majority vote to bring to the school committee and say, ‘Will you do this?”