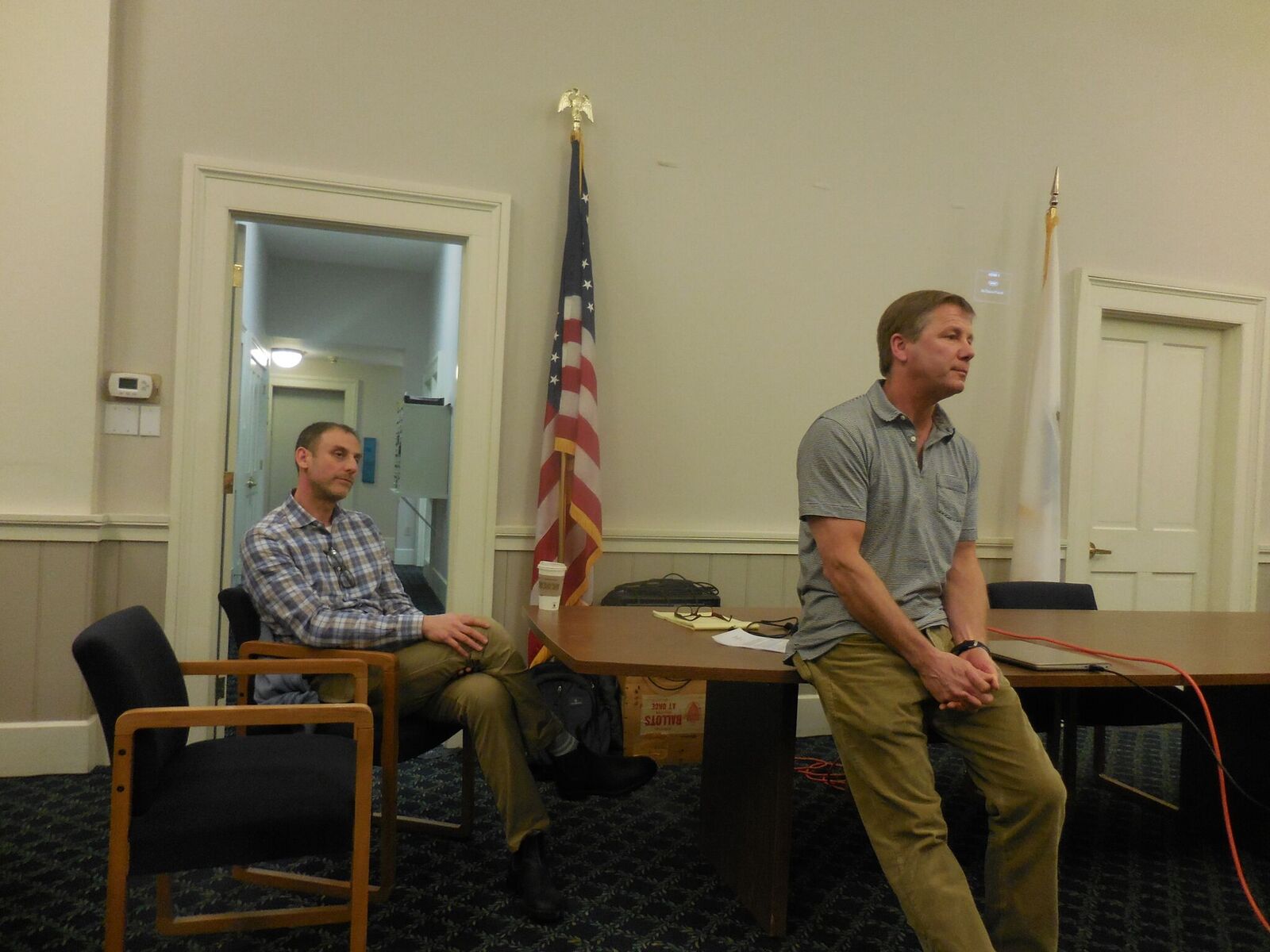 Sheffield — Since recreational marijuana was legalized in Massachusetts through a 2016 ballot initiative, observers have warned that out-of-town investors and entrepreneurs would come crawling out of the woodwork to get in on the ground floor of a burgeoning industry that has the potential for huge profits.

It remains to be seen how great the profits will be, but in the case of a developer planning a cannabis facility in Sheffield, there is no woodwork to crawl out of. Christopher Weld, who is proposing a facility on 1375 North Main St., is well-known in the town as the founder and owner of Berkshire Mountain Distillers.

The nearly four-acre lot, owned by Great Barrington builder George Soudant since 2014, is the former site of the old Shea’s Pine Tree Inn, which closed almost 20 years ago, was sold at auction in 2002 and demolished in 2015.

As required of anyone seeking a cannabis license in the state, Weld and Cohen held a public information session Tuesday night (March 27) at Sheffield Town Hall. The session attracted about 25 people, some of whom supported the proposal or were lukewarm toward it. Others were openly hostile – more on that later.

Weld led the audience through a brief PowerPoint presentation that touched on the essential facts of the proposal of his new company, Berkshire Welco LLC.

“We’re going to tell you what our plans are and to hopefully quell any fears that you may have in this very nascent industry that is new to all of us,” Weld said.

See video below of the entire presentation, along with a question-and-answer session Weld and Cohen conducted with the audience:

Weld did most of the talking. For 20 minutes, he reviewed the major components of the project including security, prevention of diversion of his product to minors, community impacts and the mitigation of nuisance issues associated with the facility. He also cited some statistics about adult use.

Weld frequently touted the host agreement Berkshire Welco signed with the town last week. Click here to see the five-year agreement approved by the Sheffield Board of Selectmen March 20. Weld emphasized that the agreement included a provision, allowed by state law, that calls for a so-called annual “community impact fee.” The fee, which Weld said could be worth hundreds of thousands of dollars annually, will be in the amount of 3 percent of gross retail sales of usable marijuana.

“It’s the only industry I know of where part of your earnings goes directly to the community,” Weld explained.

Weld said he and Cohen are looking to grow on as much as 40,000 square feet of the property, or about an acre – some indoors, some outdoors and some in greenhouses. The product will be grown pesticide-free. The state also allows for consumption of cannabis products onsite, but Weld insisted Berkshire Welco is not applying for that kind of license.

Most of the provisions for security are mandated by the state. Weld described them as “very onerous.” Each employee will be licensed by the state and there will be secure disposal of waste. There will be cameras with motion detectors. Video footage from those cameras will be held for 90 days in high definition.

“Every phase from seed to sale is monitored,” Weld said.

As for keeping the product out of the hands of minors, Weld said no one under 21 will be allowed on the premises, the product will be sold in child-proof packaging and his company will host at least three meetings a year to educate youth on the risks associated with the use of cannabis.

Weld and Cohen envision 10 to 20 new jobs will be created to service the demand created by an estimated 30 to 50 customers per day. Some audience members expressed concern that the business model could become stressed when neighboring states such as Connecticut and New York legalize adult recreational use as well. But Weld had an answer that leaned on his marketing ability and trading on the identity of the Berkshires:

“We’re trying to build a brand of the Berkshires and grow nice clean Berkshire-grown cannabis that people will come for.”

One man who did not identify himself hounded Weld about the dangers of marijuana use asked him repeatedly how selling the stuff in town would “benefit the community.” Weld remained calm and reiterated his talking points.

Robert Kilmer, who owns Twin Rivers Farm, a dairy operation in Ashley Falls, asked Weld and Cohen whether they consumed cannabis themselves. After all, Kilmer reasoned, if you’re selling a product like cannabis, doesn’t the town deserve to know whether you use your own product? Weld, however, refused to answer the question, insisting repeatedly that it was “not relevant.”

“I can’t believe that I’m standing here at the Town Hall with my fellow citizens and a cop right over there and we’re talking about putting in an industrial marijuana plant in Sheffield,” said 30-year town resident Kevin Hyams, referring to a Sheffield police officer standing in the back of the meeting room.

Hyams was also concerned about the effect weed being sold in the town would have on Sheffield’s youth. Weld said his product will be quite expensive and he pointed to statistics that show that teen use of marijuana has actually decreased in Colorado, where adult recreational use was legalized in 2013 and sales began the following year. However, that assertion was rated half-true by Politifact.

“I know that I’d much rather have local people and have you be one of the people who is doing this,” said René Wood, a former selectman, to Weld. “You have done an outstanding job with the distillery. It’s a beautiful building. I’ve never heard any complaints about how you conduct your business.”

Hyams asked Weld if the project was “a done deal.” Weld replied that, legally, yes. Berkshire Welco has applied to the state for the appropriate licenses and has made the required filings. The sale and use of recreational cannabis is now legal and, importantly, the town of Sheffield voted for it.

The fact that Sheffield voted for legalizing recreational sales of weed is important because banning cannabis facilities is far more difficult for those towns. The authority to ban marijuana shops hinges on whether the town’s residents voted against the recreational marijuana ballot question last November.

Every town and city in Berkshire County, and all but seven in western Massachusetts, voted for the recreational cannabis law. Sheffield, for example, voted for the measure by the overwhelming margin of 62–38 percent, considerably greater than the statewide margin of only 53–46 percent.

In response to a reporter’s question, Weld said the property is zoned for general business and so his facility would be a by-right use and would not require a special permit.

Berkshire Welco has applied to the town for retail store processing and commercial greenhouse permits. And its license applications have been received by the state, which will send inspectors to the property. He did not yet know when construction would begin because it’s not clear when the approvals will eventually be received.

Weld was bullish on the effect his facility could have on the local economy: “Our hope is to bring people in and those people, in turn, will buy gas locally, visit local markets and stores and hotels, so I think it should be a boon for tourism.”

As for whether he has the capital to pull it off, Weld replied, “We are starting to raise a bunch of money.”

There has been a flurry of cannabis activity in South County in recent months. A controversial proposal for an industrial-sized cannabis production facility in New Marlborough is still pending before the Board of Selectmen.

Berkshire County farmers, including Sheffield’s Ted Dobson who was at last night’s meeting and spoke briefly, have expressed an interest in cultivating cannabis. And the aforementioned Theory Wellness opened last year in Great Barrington as the county’s first medical marijuana dispensary.

In addition, Monday night (March 26) at the Great Barrington Selectboard meeting, Donna Norman of Calyx Berkshire Dispensary of Otis, who is looking to get into the cannabis business and open a retail store in Great Barrington, addressed the board during the citizen-speak session.

See video below of her presentation to the board: