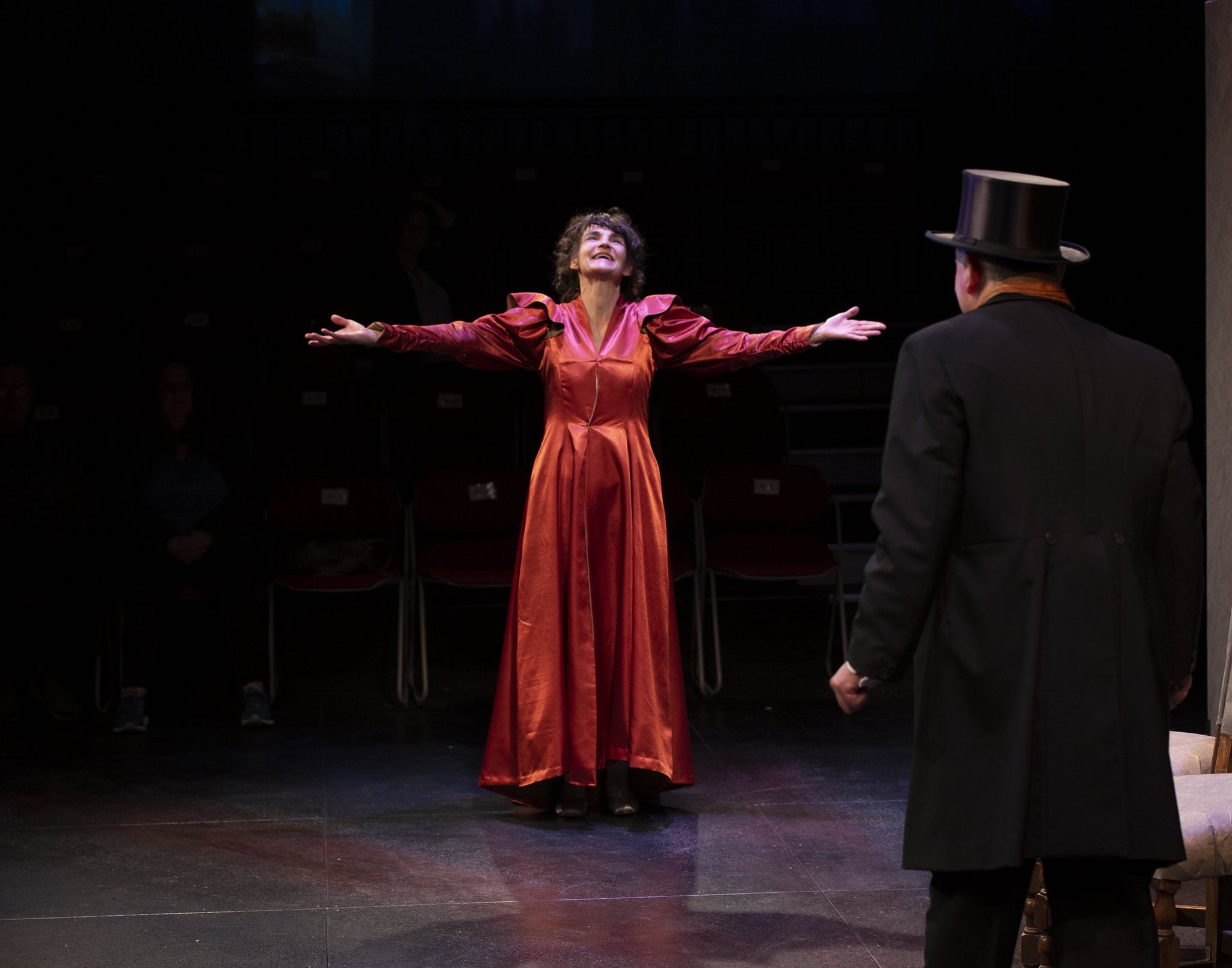 Lenox — If it’s funny, interesting or inspiring, Anne Undeland will probably do it. At least that’s how the self-described “theater artist who does a little bit of everything” sees things. In addition to performing one-woman shows; developing living history programs; doing voiceover work; conducting oral histories; and improvising, directing and acting in as many interesting productions as she can, Undeland has embarked on a new adventure: She now writes plays. As luck would have it, Saturday, April 20, marks the world premiere of her seminal work “Lady Randy,” a delightfully dizzying romp through the life of Jennie Jerome, mother of Winston Churchill. The play, produced by WAM Theatre, will be presented at Shakespeare & Company’s Elayne P. Bernstein Theatre with a run through Sunday, May 5.

“Helping launch WAM Theatre’s world premiere production of ‘Lady Randy’ right here in the Berkshires is among the biggest thrills of my life,” said Undeland of the impending premiere, one that tells “an extraordinary story of fortitude and survival.” Undeland, in her quest to find a female figure with universal name recognition, stumbled upon a paradoxical truth: “In order to find my woman, I had to find a woman associated with a famous man,” she said. Jennie Jerome, in myriad ways, seemed a logical choice. Reputed to have attended school in Lenox at Mrs. Sedgwick’s School for Young Ladies, Jerome’s mother hailed from Williamstown. Local ties coupled with the fact that Jerome fit the bill as a 19th-century woman of ambition resulted in a rich topic rife with conflict.

In 1875, the American heiress Jennie Jerome seemed to have it all. She had married an English lord; she was young, rich and beautiful; and she had just given birth to Winston Churchill. “Lady Randy” takes audience members through the treacherous, kaleidoscopic sexual and political landscape of her marriage. A woman ahead of her time, Jennie kept everyone watching; kept them guessing; and she never, ever surrendered.

“Brilliant, maddening, impossibly seductive, vaultingly ambitious, I fell headlong in love with this woman who was at once so ahead of her time and yet very much a product of her era,” said Undeland, who plays Jennie. “The first in a long line of dollar princesses, Jennie Jerome stunned me in the audacity with which she wrote her own rules in the dangerous game of sex and power,” added the playwright of the historical figure who wouldn’t stand for a marriage of appearances and, in turn, had an amazing spring of lovers.

“One of my MOs as a playwright is to write really great, juicy, sexually dimensional roles for women over 50,” explained Undeland. “Generally, if you come across a woman over 50 [in theater], she is a mom or a grandma and barred from being sexual,” she added. Undeland was not only inspired by the fierce female she portrays, but also urged along in her creative process by a slew of collaborations, two of which are aimed at supporting women, rooted in the Berkshires. Walking Our Talk, a local nonprofit rooted in the belief that tremendous change happens when women sit together in circle, is where Undeland reentered in earnest the creative process. “What circle did for me is it got me to start taking myself seriously as a theater artist,” recalled Undeland. “I never would have gotten [to this premiere] had it not been for circle,” she added. WAM Theatre is a professional theatre company with a vision to create opportunity for women and girls; this is done through a mission of theater as philanthropy or, in short, theater for everyone that benefits women and girls.

On the heels of her participation in WOT, Undeland answered a call for submissions from Berkshire Playwrights Lab. She submitted a short piece to the Radius Playwrights Festival, which, while it was not accepted, resulted in her being invited to participate in Berkshire Voices, a platform for emerging playwrights to share new work and receive constructive feedback in a supportive community environment. It was in conjunction with BPL that “Lady Randy” was developed, both through the writers’ workshop and staged readings, and by the urging of Jim Frangione. “I was looking around for a one-woman show to do,” recalled Undeland, “until Jim suggested I turn [my work] into a two hander.” And just like that, “Lady Randy” was born.

“We are always thrilled when a play we have nurtured moves on to a production in the Berkshires or another regional theater,” said Tristan Wilson, managing director at Berkshire Playwrights Lab. “Our mission is to give playwrights a safe and supportive environment so they can do their best work and this is another example of the value of that mission.” The show, directed by Frangione (who was an artistic director at BPL during the play’s development), stars Mark Zeisler—a broadway actor who Undelands calls “just phenomenal”—opposite the playwright.

Undeland’s premise is clear: Who we come from, where we come from and what has been done before us truly informs our present. Of her success as a woman, writing about women, and having been nurtured by organizations devoted to bolstering women’s creativity? “It feels great, and it feels like, in many ways, it’s our time—in a way that feels new and fresh and really dynamic,” she said. “There is a whole range of human emotion and human expression for women over 50, [and] I am finding that it’s a really rich vein artistically, and there is a really great response to it out in the world, which is very exciting!” she added.

Undeland, who is decidedly coming into her own as a theater artist, called this period in her life nothing short of incredibly exciting. “The possibilities feel endless… like a whole world is opening up,” she said, calling the exploration of women over 50 “an untapped goldmine.” Furthermore, she pointed to working with WAM Theatre—from artistic director Kristen van Ginhoven to all the people there—as “powerhouses who really make things happen.” She also gave a shout out to Talya Kingston, WAM’s associate artistic director and dramaturg, who Undeland called “wonderful and invaluable to the process [of bringing “Lady Randy” to the stage].

As for Winston Churchill? “He had a sense of drama and a sense of the moment and never gave up; I would argue that he got a lot of that from his mother,” Undeland explained. “She was instrumental in his early career. Very well connected, she in many ways launched his early career (although she had died by the time World War II came around), influencing everyone around her to advance him.” In this way, a master at the game of sex and power—and unapologetically so—seems to drive the male historians crazy for one simple reason: In many ways, Jennie Jerome behaved as a man. That said, had she been a man, a lot of her sexual behavior would have been either accepted or simply ignored, an age-old double standard at which society still needs to chip away.

Undeland has worked in the northeast with WAM Theatre, Berkshire Playwrights Lab, Ventfort Hall, Barrington Stage, Stageworks/Hudson, Capital Repertory Theatre, Mixed Company, MopCo, and Shakespeare & Company; she has also performed in New York at the Metropolitan Playhouse and Theatre Row, and in Boston at the New Repertory Theatre. In Undeland’s words, “Lady Randy” runs a lean 85 to 90 minutes, and is “fun, thought provoking and hopefully moving.”

In keeping with WAM’s philanthropic mission, a portion of the proceeds from “Lady Randy” will be donated to selected beneficiary Tapestry Health Systems. Since its inception in 1973, Tapestry has been the sole provider of low-cost, federally funded (Title X) reproductive health care and family planning services in Berkshire County. Tapestry will use WAM’s donation to provide training to staff to improve their services to marginalized communities.