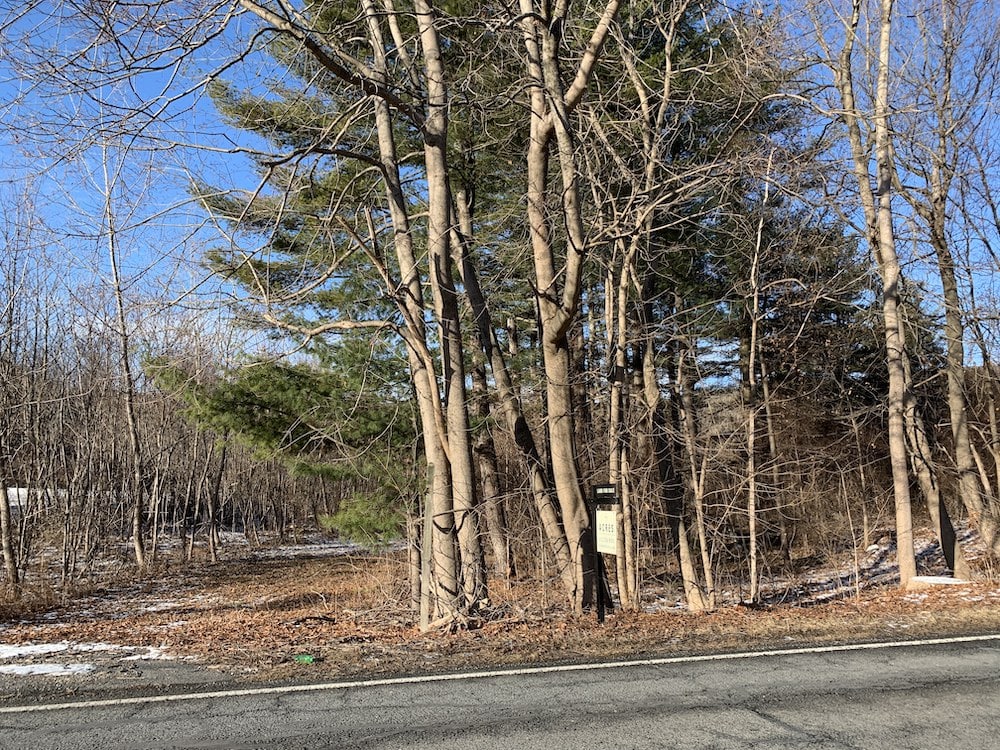 Terry Cowgill
Some residents are angered that the Great Barrington Affordable Housing Trust wants to purchase this property for development on North Plain Road.

Great Barrington — In more than six years of covering Community Preservation Committee meetings in the town of Great Barrington, this reporter has never seen more than 15 people in the fire station meeting room where the panel generally convenes. So when more than 50 people packed the room Monday night, it was evident that something was up.

It was standing-room only as dozens of angry residents of the Housatonic section of Great Barrington, including a former selectman, vented their feelings about the committee’s consideration of funding a proposal from the town affordable housing trust to acquire land for housing.

On the agenda and up for final consideration by the committee was a proposal for the town to acquire 7.25 acres, known as the Alden property, on North Plain Road near the intersection with Housatonic’s Main Street. The amount requested from the CPC was $200,000.

Before the CPC could even discuss the proposal, former selectboard member Dan Bailly and his brother Jim got into a shouting match with the committee concerning lack of notice from the CPC and the housing trust to the 21 bordering property owners about the proposal.

See video below of a lively discussion, before the vote, of the affordable housing property acquisition proposal before the CPC:

“I cannot believe any board in the community would hold such a hearing without notifying any of the abutters,” Jim Bailly said. “This is ridiculous. You people are cramming this down our throats!” 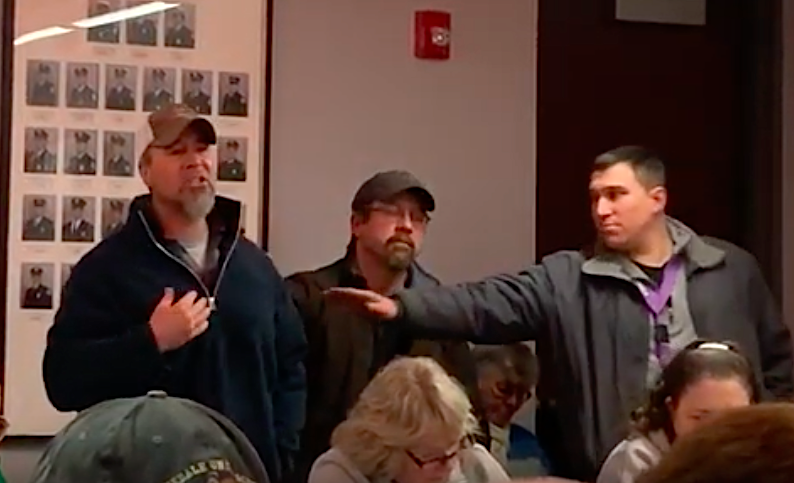 Both Baillys contended that the CPC did not have enough information by which to judge the worthiness of the housing trust’s application for funding, but committee members said the trust’s stage two application was complete.

Dan Bailly insisted, even though the existing homes in the neighborhood use septic systems and the new units on the Alden property would be served by a sewer extension, that the older homes would be required to hook up to the sewer line to the tune of some $4,000 apiece.

“They don’t have to hook up,” the mild-mannered Cooke said of the existing septic users.

“Bullshit,” Dan Bailly shouted. “They do!” 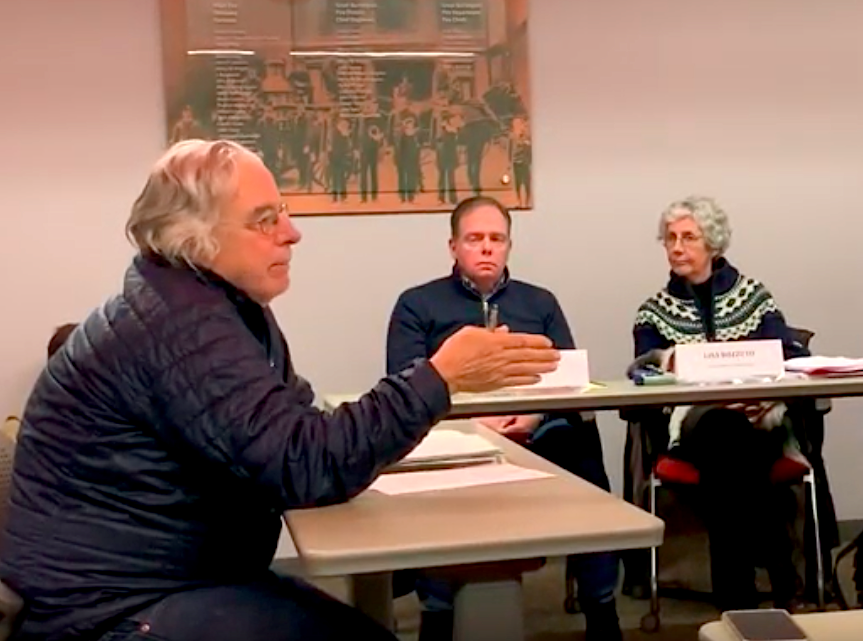 Jim Bailly also insisted — wrongly, it appears — that the proposal, if approved, would run afoul of the town’s zoning bylaws. Town planner Chris Rembold, who doubles as the CPC administrator, said the zoning code would allow the 7 acres in question to be divided into quarter-acre lots. A preliminary subdivision plan drawn up by a developer several years ago showed that zoning bylaws would allow for 12 larger lots or the possibility of 24 normally-sized lots.

“A two-family house is allowed on a single lot,” Rembold explained. “Twenty-four lots could therefore equal 48 units by-right, so the zoning does, in fact, allow it.”

At one point, Jim Bailly became so loud and unruly that CPC Chairman Tom Blauvelt asked him to leave the room. Bailly stayed.

“I am a resident of Housatonic, sir,” Jim Bailly said at one point. “You will respect me.”

There seemed to be a lot of confusion among members of the audience about what stage the proposal was currently at. Housatonic resident and Edge contributor Bob Gray asked for the name of the developer.

Blauvelt, who is also a member of town finance committee, calmly explained that there is no developer yet. The proposal before the CPC is for funding the purchase of the property, which is currently under contract, and it is the committee’s job to determine whether the proposal fits within the parameters of the state Community Preservation Act. The committee is not charged with deliberating or adjudicating land-use issues, he said. 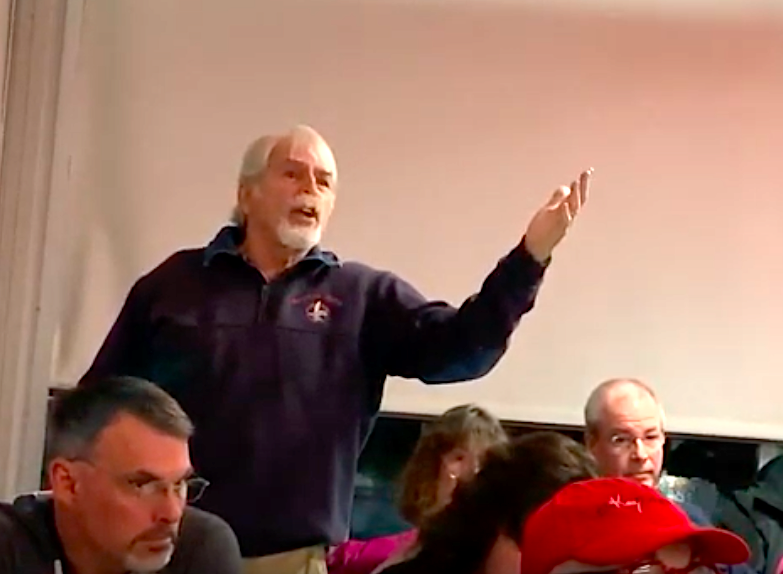 Housatonic resident Bob Gray, an abutter to the property, wanted to know who would make money off the project. Photo: Terry Cowgill

In Great Barrington’s case, applications must also be consistent with the town’s award-winning 2013 master plan. The town adopted the CPA in 2012, both through town meeting and a ballot vote, by a two-thirds majority.

The CPA also provides for a significant annual contribution of state funds to each participating municipality through the Massachusetts Community Preservation Trust Fund.

The state’s contribution varies but, on the local level, the CPA is funded by a 3% property-tax surcharge on the value of residential and commercial properties above the first $100,000 of assessed value. Great Barrington expects to raise about $350,000 locally each year.

Several other residents, including the Baillys’ mother, Barbara, stepped up during the public comment portion of the meeting. Their concerns ranged from the proposal’s impact on property values to taxes. One claimed the development could “force [people] out of their homes.”

See video below, during public comment, of about a dozen concerned Housatonic residents and abutters of the land proposed to be purchased by the town affordable housing trust:

Others wondered aloud about what kinds of residents to expect in the new development, if it ever comes to pass. Rembold explained what constitutes affordable housing.

With member Jim Mercer abstaining, the CPC otherwise voted unanimously to recommend funding the purchase. However, the purchase is hardly a done deal. It must be approved, along with the other items the CPC approved.

Click here to see the list, all items of which were recommended for funding, with the exception of the Berkshire Natural Resources Council’s request for $30,000 to improve public access to the Barbieri Forest.

If the proposal is funded at town meeting, then the housing trust would meet again, hire a developer, come up with a specific proposal and go through the permitting process, which would include public hearings before town bodies such as the planning board for subdivision and site plan approval. Abutters would be notified of any public hearings.

Jim Bailly also made a bit of political news, announcing that he plans to run as a Republican for the selectboard in this May’s elections. Ed Abrahams, who is the only member whose term expires this year, has not yet said if he intends to run for a third term.