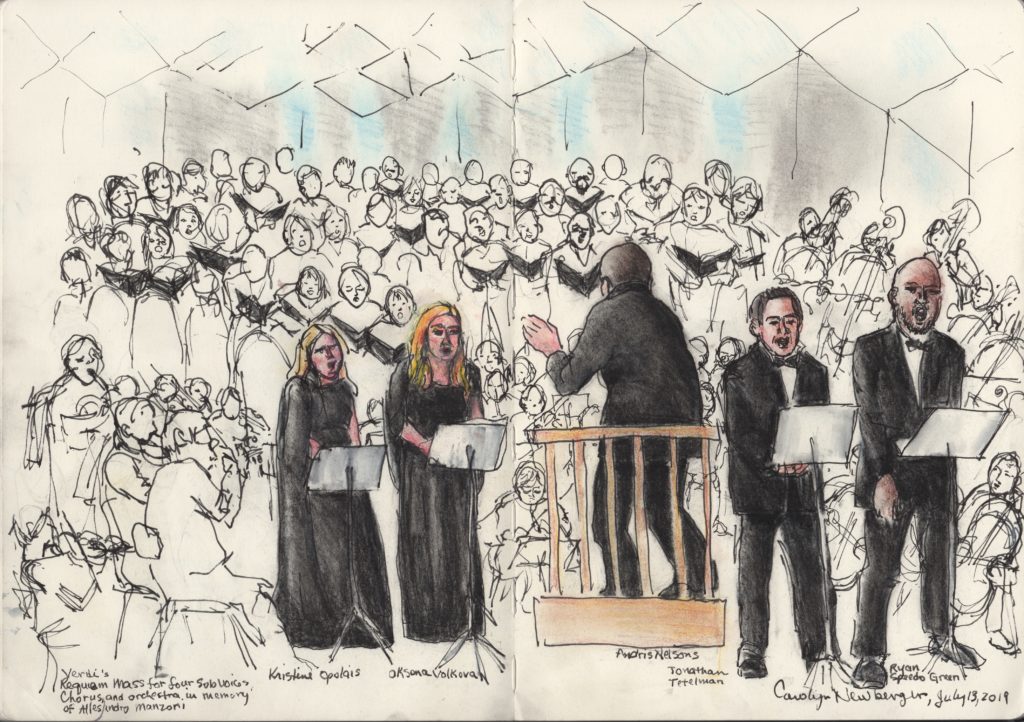 Andris Nelsons reaches for the heavens at Tanglewood: Opolais and the Festival Chorus in a divine Verdi ‘Requiem’

At the outset of this spellbinding performance, the Tanglewood Festival Chorus created an almost impossibly reverential mood in the Tanglewood Shed. Led by Andris Nelsons, conducting with minimal gestures, the requiem began with hushed tones, the ambience increasing in intensity, with swells of volume and an astonishingly subtle controlled diminuendo.

Then crash; the cry of Dies Irae came booming, ominous, chilling in every sense, so frightful and so musically thrilling that it sent chills up the spine.

The tenor and bass-baritone led the Dies Irae, dies illa proclamation: “The day of wrath, that day will dissolve the world in ash.” Apocalyptic, indeed!  Responding with a fever pitch of blaring trumpets, keening horns, and simultaneous fortississimo hits on two huge bass drums, suspended vertically and horizontally, only a few violins and woodwinds were protected from these explosions — by plexiglass barriers. The rest of us couldn’t escape the wrath of God.

Contrasts in vocal and instrumental colors extended through the performance, with solo, choral, and orchestral tonalities expressed with striking character. Where Kristine Opolais’s mature soprano has taken on a creamy tessitura, Oksona Volkova’s facile mezzo displayed an equally intense but more focused and reedy texture. While Jonathan Tetelman’s tenor was silvery and pointed, perfect for the judgmental declamations and confessions of guilt that fell to him, Ryan Speedo Green’s enveloping, burnished bass baritone was authoritatively stentorian and meltingly sorrowful.

To the cellos went the echoes and resonances of lamentation and affectionate devotion. The brass – the BSO section that can charge a Prokoviev march, Shostakovich tragedy or Copland syncopation with a rainbow of rhythmic sonorities  — projected heated bursts of lightening to accentuate the thunder, offered a pliant cushion to comfort the afflicted mezzoin the Lacrymosa, softened the controlled rage of an avenging deity, and supported the orchestral foundation with the cimbasso, a curious instrument that characterizes the Grand Inquisitor in Verdi’s opera, Don Carlo. Verdi preferred this nasal low brass oddity to the tuba.  Here, the Inquisitor’s presumed superioritywas voiced masterfully by BSO principal tuba, Mike Roylance.

Through Verdi’s affecting search for the meaning of life and the devastation of loss, the Tanglewood Festival Chorus served brilliantly as a Greek chorus of legend, echoing the anguish and giving corporeal substance to the prayers expressed by the principals. The chant that foretells the final Libera me, luceat eis Domine (“Deliver me, O Lord, from eternal death”) brought soloists, chorus, orchestra, and audience into Verdi’s arching cathedral, with nuance, balance and solemnity packed into a long, single, unison line.

Reconstructed and rehearsed by conductor James Burton, the chorus seemed to find a new confidence. (This may perhaps have to do with abandoning its tradition of performing all its texts from memory, in languages from German to French to Russian to Czech.  Holding sturdy leather binders, which from the audience resembled black wings attached to their angelic white tops, they sang with refreshing confidence in every ensemble or sectional solo, with unerring responses to Nelsons’s nuanced gestures.

Kristine Opolais gave a totally committed performance. She served as the playwright dedicatee’s, Alessandro Manzoni’s, amanuensis, the principal storyteller, and a transparent medium for the longings and fears of humankind.  Her affecting investment in each phrase of the lyrics was graced by a sincere stage presence and musicality.  All through, her voice was gorgeous.

Gentle reader, if you watch these operatic excerpts from “La Boheme,” “Manon Lescaut,” and “Madama Butterfly,” and listen to this brief interview at the Metropolitan Opera in New York in 2017, you’ll get a sense both of her voice and her professional values. Opolais, in our view, is sui generis, and we applaud Andris Nelsons and the BSO for bringing her to us often.

“I feel everything in a really intensive way.”

With the final Libera Me, the “Requiem Mass” circled back to its prayerful beginning.  Signore Manzoni, and the Soloists, Chorus, Orchestra and audience went softly into the night. 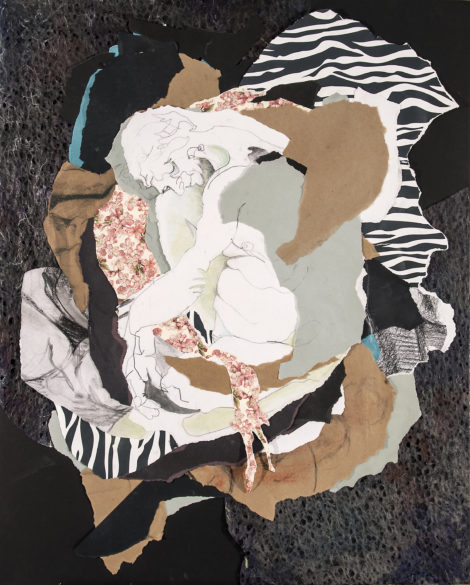